In this article, we’ll walk through another end-to-end ML workflow while predicting the hospital LOS of ICU patients. The data is a subset of MIMIC3 – Multiparameter Intelligent Monitoring in Intensive Care – a de-identified, ICU, freely available database. Using a recipe detailed in my second book “Medical Information Extraction & Analysis: From Zero to Hero with a Bit of SQL and a Real-life Database,” I’ve summarized MIMIC3 into one table with 58,976 instances. Each row represents one admission. This table has the following columns, similar to the last article:

I’ve removed mortality from this dataset as I don’t want to provide hints to the model in the form of mortality = short LOS. Besides, when asked to predict LOS, the model should not be aware of the overall admission outcome in terms of mortality as it may be considered data leaked from the future.

The hospital LOS in days is the label of the dataset, the outcome we’d like the ML model to predict in this supervised learning exercise.

We will approach the LOS prediction challenge in two ways:

Short LOS Is Not Always a Good Outcome

Please keep in mind that a short LOS is not necessarily a good outcome. The patient may have died and thus a short LOS. In addition, there may be circumstances where a shorter LOS is accompanied by a higher readmission rate. In order to get the full picture, one needs to know the mortality and readmission rates associated with a specific LOS.

The Python code used for predicting LOS with regression ML models, is publicly available at Kaggle.

Data was separated into a train (47,180 admissions) and test (11,796 admissions) datasets as previously explained. 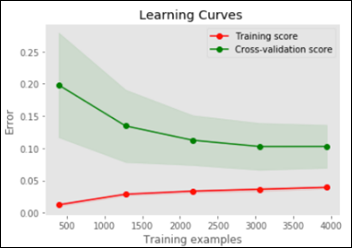 The learning curves show that the model is overfitting, as the validation MAE is stuck on approximately 0.12 or 12 percent, while the error on the training set is much lower at 5 percent.Thus, the model would benefit from more samples, better feature engineering, or both.

RFR offers a view into its decision-making process by showing the most important features related to LOS: 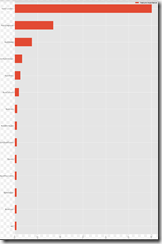 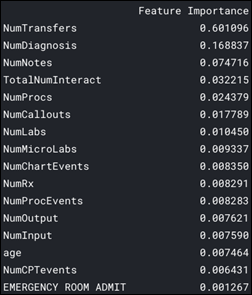 Below is the chart of the predicted vs. the true LOS on the test dataset. On the X axis are the number of real days in the hospital and the Y axis is the predicted LOS by the RFR model. In a perfect situation all points would fall on the blue identity line where X=Y. 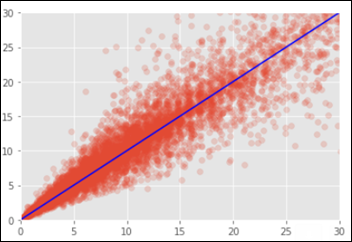 I’ve trained and evaluated several NN on the above data set: from small 15,000 to 20 million weights in different combinations of dense layers and units (a.k.a. neurons).One of the NN’s (with 12.6 million trainable parameters) learning curves: 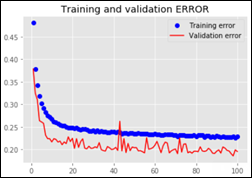 The best NN MAE is 2.39 days or a normalized MAE of 19.5 percent. The NN performance is worse when compared to the RFR model.

The Python code used for this part of the article, is publicly available at Kaggle.

Using the same dataset as the one used for regression above, I’ve grouped the admissions into the following four classes: 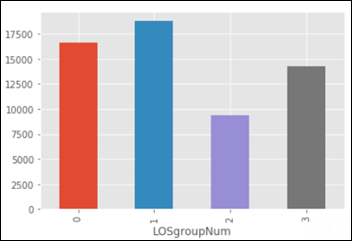 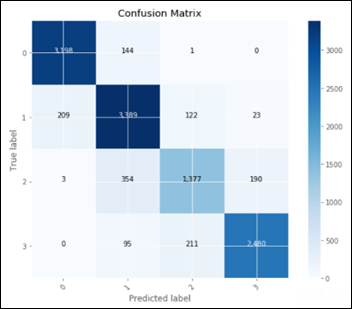 Each one of these classes is going to be compared against all the other groups, thus the name of the technique one-vs.-all, so the results can be summarized in a 2 X 2 confusion matrix:

In the following figure, we consider only one class, the second one, labeled 1 (as counting starts with 0) and calculate the confusion matrix of the model in regard to this class: 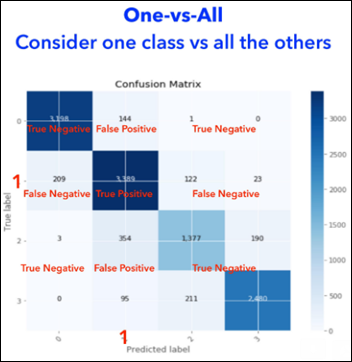 The higher the F1 score and AUC, the better is the model performance.

Both the RFC and the NN models are performing best when evaluated on the first group-vs.-all: LOS below vs. above 4 days (LOS group 0).

Random Forest is an ensemble of other weak predictor models. Still it outperforms any NN by a large margin with both the regression and classification challenges of predicting the LOS.

It is interesting and maybe worth an article by itself, how a group of under performing “students” manage to use their error diversity in achieving a better outcome than the best-in-class NN models.