We’d like a ML model to learn from past experiences, so post-training, it should be able to generalize when predicting an output based on unseen data. The ML model capacity should not be too small nor too large for the task at hand, as both situations are not helping to achieve the goal of generalization.

In the funny yet accurate description below: 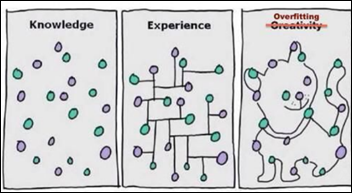 Regression and Classification Examples of Under / Overfitting

We are searching for the sweet spot — a good, robust fit so the model would be able to generalize with unseen data.

The model should have sufficient capacity to be able to learn and improve and yet at the same time, not necessarily become the absolute best AI student on the training set. 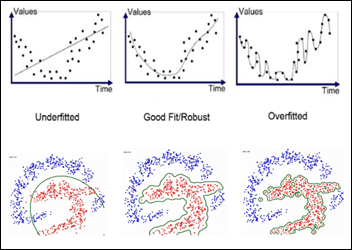 Consider the left side of the above figure. The upper diagram displays data which is obviously not linear. Still, the ML model we’ve applied is linearly restricted – the model capacity is limited for the task.

The lower diagram displays a classification task, but the model is restricted to a circle. Its capacity is limited, so it cannot classify the dots better than with a circle separation line

When a ML model is underfitting, it basically doesn’t have enough or the right type of brain power for the task at hand or the model is exposed to a poor choice of features during training. We can help the ML model by:

Underfitting is also called high bias and low variance and is one of the causes for a model to underperform. The model has a high bias towards a linear solution (in the regression example above) and a low variance in terms of limited variability of the features learned

You’ve trained your ML model for some time now and it achieves an amazing performance on the training set. Unfortunately, once in production, the ML model is only slightly better than just random predictions. What happened?

As the right side of the above figure shows, the model has used its large capacity to memorize the whole training set. The ML model became a memory bank for the training samples’ features, similar to a database. This overfitting caused the model to over train, to become “creative,” and also to become the best-ever on the training data.

However, the overfitted model fails on real-life test data because it has lost the ability to generalize. We need the ML model to learn with each experience to generalize, not to become a memory bank

Overfitting is also called low bias and high variance, as the model has a low bias to any specific solution (linear, polynomial, etc.). The model will consider anything, any function, and it has a huge variance. Both factors contribute to an increased overall model prediction error. 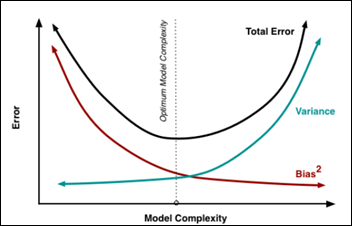 How do we achieve a balance between the above two opposing forces of bias and variance? We need a tool to monitor the learning process — the learning curves — and a method to continuously test our model at each and every epoch, the cross-validation technique.

Once you’ve got the data for a ML project, it is customary to cut a random 20 percent of samples, the test set and put it aside, never to be looked at again until the time of testing. Any transformation you plan on doing (imputing missing values, cleaning, normalizing, etc.) should be done separately on the training and test sets.

This strict separation will easily prevent the scenario where normalizing over the whole data set and learning the average and standard deviation of the test set in the process may influence the model decision making in a way similar to cheating or letting the model know information about the test set, which the model should not know. The rest of the data after removal of this test set is the original training set.

With a cross-validation arrangement as detailed above, we can monitor the learning process and identify any pathological behavior on behalf of our student ML model during training.

Underfitting learning curves above show both the training and the validation curves remaining above the acceptable error threshold during the epochs of the learning process. Basically the model does not learn: either not enough model capacity or not good, representative enough features it can generalize upon. We need to either increase model capacity, increase the number or complexity of the features, or both. Adding more training samples will not help.

Perfect fit happens when the validation error is below the acceptable threshold and it starts to plateau and separate from the training curve. At that number of training epochs, we should stop, call an end for the learning session, and give our ML model a short class break.

A ML model has parameters (weights) and hyper-parameters such as the learning rate. 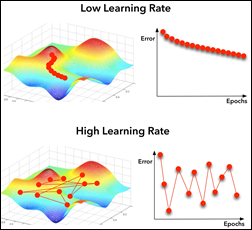 Usually collecting more samples to feed an overfitting model is a time, money, and resource-consuming activity. Consider an image analysis ML model that identifies between dogs and cats in an image. Until recently, this exercise was used by CAPTCHA to distinguish between humans and malicious bots trying to impersonate humans. Machines recently achieved the same level as humans, so CAPTCHA is not using this challenge any more. Nevertheless, dogs vs. cats became one of the basic, introductory exercises in computer vision / image analysis.

While developing such an image classification model, one usually increases the model capacity gradually until the model starts overfitting. Then its customary to add data augmentation, a technique used only on the training set, in which images are being reformatted randomly around the following image parameters:

By exposing the algorithm during training to a more diverse range of images, the ML model will start overfitting at a much later epoch, as the training set is more complex than the validation set. This in turn will allow the model to bring the validation error to an acceptable level.

Eventually, a big enough model will start overfitting the data, even if the training set has been augmented. Another technique to deal with overfitting is to use a regularizer, a model hyper-parameter. Basically it penalizes the model loss function on any large modifications to the model weights. Keeping the changes to the weights within small limits during each epoch is important, as we don’t want the model to literally “jump to any conclusions.”

An interesting, different, and surprisingly very efficient approach to overfitting that can prevent a ML model from learning the whole training set by heart is called dropout. Like data augmentation above, dropout technique is used only on the training set. It takes out randomly up to 50 percent of a NN layer units from one learning epoch, like randomly sending home half of the students for one class. How can this strategy prevent overfitting?

The analogy with these students being dismissed from that class / epoch caused all the other units (students) in the layer to work harder and learn features they were not supposed to learn otherwise. This in turn zeroed the weights for up to half of the units while forcing other units to modify their weights in a way that is not conducive towards a “memory bank.” Shortly, dropout destroys any nascent memory bank a ML model may try to create during training.

Once training is completed, hyper-parameters have been optimized, data has been re-engineered, the model has been iteratively corrected, etc. then and only then one brings out the hidden testing set. We test the ML model and its performance on the test set will hopefully be close to its real-life performance.