A Machine Learning Primer for Clinicians–Part 3

In the previous article, we defined unsupervised machine learning as the type of algorithm used to draw inferences from input data without having a clue about the output expected. There are no labels such as patient outcome, diagnosis, LOS, etc. to provide a feedback mechanism during the model training process.

In this article, I’ll focus on the two most common models of unsupervised learning: clustering and anomaly detection.

Note: do not confuse this with with classification, which is a supervised learning model introduced in the last article.

As a motivating factor, consider the following image from Wikipedia: 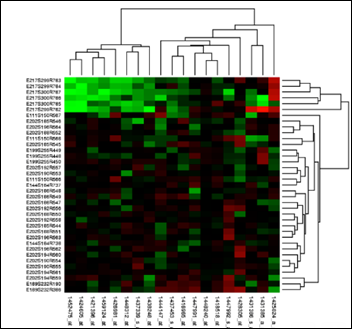 The above is a heat map that details the influence of a set of parameters on the expression (production) of a set of genes. Red means increased expression and green means reduced expression. A clustering model has organized the information in a heat map plus the hierarchical clustering on top and on the right sides of the diagram above.

There are two types of clustering models: 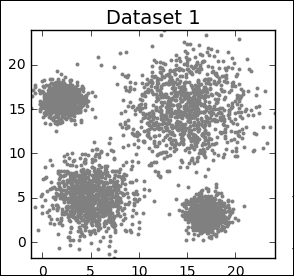 The model initializes four centroids, usually at a random location. The centroids are then moved according to a cost function that the model tries to minimize at each iteration. The cost function is the total sum of the squared distance of each point in the cluster from its centroid. The process is repeated iteratively until there is little or no improvement in the cost function.

In the animation below you can see how the centroids – white X’s – are moving towards the centers of their clusters in parallel to the decreasing cost function on the right.

While doing great on Dataset1, the same model fails miserably on Dataset2, so pick your clustering ML model wisely by exposing the model to diverse experiences / datasets:

Clustering models that don’t need to know a priori the number of centroids (groups) will have the following problem definition:

The model below initializes randomly many centroids and then works through an algorithm that tells it how to consolidate together other neighboring centroids to reduce the number of groups to the overall lowest cost function.

From “Clustering with SciKit” by David Sheehan

While the above example had as input two dimensions (features) X and Y, the following gene expression in a population has three dimensions: X, Y, and Z. The mission definition for such a clustering ML model is the same as above, except the input has now three features: X, Y, and Z. 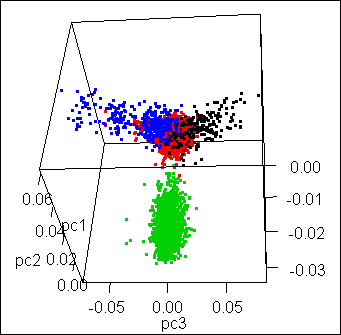 The animated graphic is at www.arthrogenica.com

As a motivating factor, consider the new criteria for early identification of patients at risk for sepsis or septic shock, qSOFA 2018. The three main rules:

Let’s focus on two parameters, RR and BP, and a patient who presents with:

A rule-based engine with only two rules will miss this patient, as it doesn’t sound the alarm per the above qSOFA definition. Not if the rule was written with AND and not it had OR between the conditions. Can a ML model do better? Would you define the above two parameters, when taken together, as an anomaly ?

Before I explain how a machine can detect anomalies unsupervised by humans, a quick reminder from Gauss (born 1777) about his eponymous distribution. 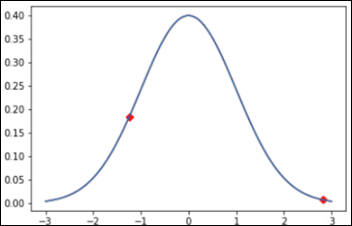 Back to the patient that exhibits RR = 21 and BP=102 and the decision whether this patient is in for a septic shock adventure or not. There are two variables: X and Y, and a new problem definition:

Note the elongated, oblong shape of both the peaks chart and the contour map underneath it. This is the crucial fact: the shape of the Gaussian distribution of X and Y  is not a circle (which we may have naively assumed), it’s elliptical. On the peaks chart, there is a red dot with its corresponding red dot on the contour map below. The elliptic shape of our probability distribution of X and Y helps visualizing the following: 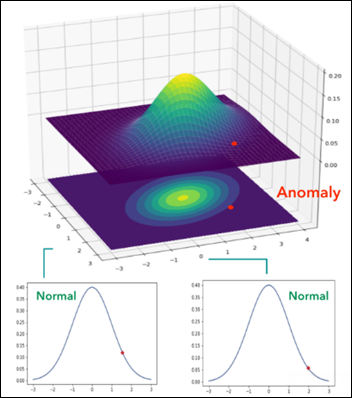 Unsupervised anomaly detection should be considered when:

Scale the above two-parameter model to one that considers hundreds to thousands of patient parameters, together and at the same time, and you have an unsupervised anomaly detection ML model to prevent patients deterioration while being monitored in a clinical environment.

The fascinating part about ML algorithms is that we can easily scale a model to thousands of dimensions while having, at the same time, a severe human limitation to visualize more than 5D (see previous article on how a 4D / 5D problem may look).

How to Properly Feed Data to a ML Model