A Machine Learning Primer for Clinicians–Part 6

Before detailing what is a NN, let’s define what it is not.

As there is much popular debate around the question whether a NN is mimicking or simulating the human brain, I’ll quote Francois Chollet, one of the luminaries in the AI field. It may help you separate at this early stage between science fiction and real science and forget any myths or preconceptions you may have had about NN:

Nowadays the name neural network exists purely for historical reasons—it’s an extremely misleading name because they’re neither neural nor networks. In particular, neural networks have hardly anything to do with the brain. A more appropriate name would have been layered representations learning or hierarchical representations learning, or maybe even deep differentiable models or chained geometric transforms, to emphasize the fact that continuous geometric space manipulation is at their core. NN are chains of differentiable, parameterized geometric functions, trained with gradient descent.” (From “Deep Learning with Python” by Francois Chollet)

You’ve met already an artificial neural network (NN) in the last article. It predicted the LOS based on age and BMI, using a cost function and trained with gradient descent as part of its optimizer. 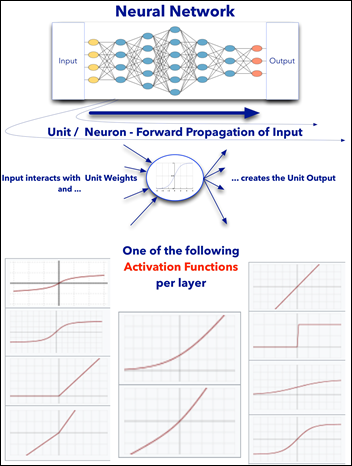 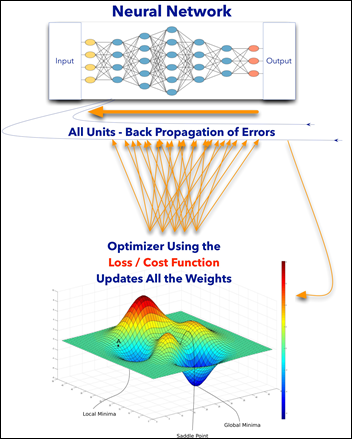 In the following example, a ML model tries to predict the type of animal in an image as a supervised classification task.

What Is the Difference Between a NN and a Non-NN ML Model?

Remember the clustering exercise from a previous article? 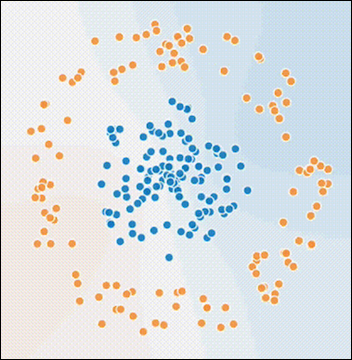 How would a NN model approach the above supervised learning problem ?

Note that no centroids are defined, nor the number of classes (two in the above case) are given.

The loss function that the model tries to optimize results from the accuracy metric defined: predicted vs. real values (blue or orange). Below there are five units (neurons) in the hidden layer and two units in the output layer (actually one unit to decide if yes / no blue for example, would suffice as the decision is binary, either blue or orange.)

The model is exposed to the input in batches. Each unit makes its own calculation and the result is a probability of blue or orange. After summarizing all the layers, the model predicts a dot color. If wrong, the weights are modified in one direction. If right, in the opposite direction (notice the neurons modifying their weights during training). Eventually, the model learns to predict the dot color by a given pair of X and Y (X1 and X2 in the animation below)

From “My First Weekend of Deep Learning at Floyd Hub.”

Advantages of a NN Over a Non-NN ML Model

The last point of transfer learning, which I’ll detail in future articles, is one of the most exciting developments in the field of AI. It allows a model to apply previously learned knowledge and skills (a.k.a. model weights and architecture) with only minor modifications to new situations. A model trained to identify animals, slightly modified, can be used to identify flowers.