I enjoyed HLTH, split time in sessions and networking with exhibitors. Safety protocol was solid. Also, got a haircut, why not? Came up with a “crazy enough it just might work” idea while in the chair. PS: barbers have a *lot* of inside info. (Dysf(n))

Since the subject you’ve raised is security, well security is surely an area requiring flexibility. Thus what do you implement? AES? ECC? What should the key length be? Do we need to worry about quantum decryption attacks? Did the NSA really weaken this or that algorithm, and if so, by how much? Who do you trust and why? Honestly, security can be one giant argument that never ends.(Brian Too)

I would guess half of people 18-35 have moved in the last couple years. Younger people have less time off work. They are on a high-deductible plan and primary care practices can’t tell them what they’ll have to pay (retail can). Wait times to get a visit are a couple months in many parts of the country, more if you are trying to establish a new relationship (which in turn will run the bill up over half a grand.) Younger people don’t have a chronic condition, so the immediate value of going in for a visit a few months from now is mostly based around screening. Overall, the costs and barriers to accessing the “country doctor” relationship are higher for younger people while the value and ability to pay is lower. It isn’t a youth “culture” thing; it’s just money. The incremental solution is the same as it has always been, absent major federal legislation. Dramatically increase the supply of people who can be PCPs. It’s well within state legislatures abilities and it is well within the physician industry’s power. In 40 years, all the living voters will have only ever had a transactional relationship with doctors, but the retired providers will have sold their practice to private equity, so the political backlash will be somebody else’s problem. (IANAL)

How many virtual primary care startups can the market support? (IANAL)

To quote Cady Heron from the timeless classic Mean Girls, “The limit does not exist” (at least not yet, but at some point these companies will have to make money). (Dales Brian) 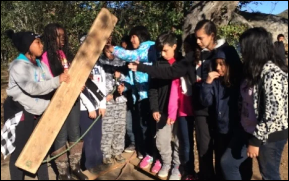 Readers funded the Donors Choose teacher grant request of Ms. Y in California, who asked for an IPad to use as a document camera. She reports, “I am at a loss for words. I recently had to teach from home due to pandemic circumstances and I was not able to teach much math (specially) because I did not have a document camera to show my work and solve problems. The document camera I have at work is very blurry so even if I am in my classroom it is difficult for my students to see my notes. However, now with the document camera we are able to learn every day regardless of my setting and students are able to see my notes clearly. Thank you!” 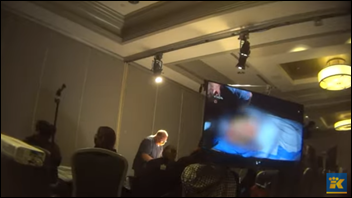 The organizer of a live autopsy event cancels its Halloween day stop in Seattle after authorities question the ethics of selling tickets for the public to watch autopsies performed on donated cadavers. Death Science charged $500 for its Portland show, which was held in a Marriott hotel conference room. The body came from Las Vegas-based for-profit company Med Ed Labs, which gives families the cremated remains of their loved ones, avoiding funeral costs in return for allowing company to sell the corpses for many thousands of dollars (Death Science would only say that it paid more than $10,000 for the body it used). Reporters who viewed the Portland event along with several dozen attendees noticed that a medical bracelet that listed the man’s name was still attached to the body. Downtown Courtyard Marriott cancelled the Seattle event after finding out that Death Science had misrepresented the gathering as a medical equipment training class. 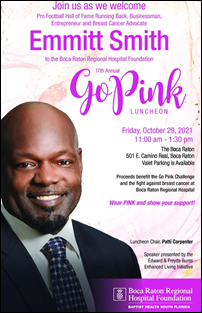 Boca Raton Regional Hospital Foundation refuses to comment on why its fundraiser for immunocompromised women is being held indoors with masks and vaccination optional. The headliner is former Dallas Cowboy Emmitt Smith, who tweeted photos last week showing him signing autographs unmasked at an event. An anonymous insider reports, “It’s typical Boca. When given the chance to have a glitzy event or keep people alive, the glitzy event will win every time. There is just no reason that a foundation with so much money, connected to a hospital, is hosting an in-person event right now.” The foundation, which holds $300 million in assets, earned unwanted publicity earlier this year for allegedly fast-tracking the vaccination of big donors.

A former Texas nurse is sentenced to death for killing four ICU patients who were recovering from heart surgery by injecting air into their arteries. Prosecutors played a recording of jailhouse phone conversations in which William Davis told his wife that the deaths were accidental and his only intention was extend the ICU stays of the patients so he could accrue overtime.