The NPfIT attempted to build a system rather than buy one. My pet theory is that this is part of why the NHS failed with NPfIT. Having an existing system to implement automatically puts all sorts of conceptual stakes in the ground. You not only get the What will this system do, you also get the How and the Why laid out for you. Ultimately, this is why purchasing third-party software eclipsed homegrown systems. Well, that and the ability to spread the development costs around. (Brian Too)

I believe this announcement [of the VA’s 12-month Cerner implementation cost review] still requires far more of an explanation than was given. I think an explanation can be given that protects the identities and dignity of VA employees, but also makes it clear that changes are underway. This organization still serves a gigantic public need for a very valued constituency. Our veterans really do deserve a lifetime of strong support from the VA. I want to recognize that there is a lot of good work the VA does in fulfilling that mission. This project sounds like a corner where the VA may not be living its values. (Accountabilibuddy)

UHC is amassing a huge presence in healthcare (data, contracted patient lives, POC resources, etc), where they can use their position to control cost and access, much in the same way people fear digital companies like Google having access to large amounts of healthcare data. Your CIO audience should be concerned about the motives of these vendors, short and long term. They are in it to make money, many times at the expense of patients. (Susanna Stevens)

I don’t want to diminish [Seve] Job’s legacy in tech, because it is truly massive. That said, I think his early death is a good parable for Apple (and others) attempts to break into healthcare technology. Steve Jobs died because he thought he was smarter than oncologists who had studied cancer for years, and appeared to think he was smarter than the healthcare delivery system as a whole. Had Jobs pursued traditional treatment as soon as his cancer was detected, he would very likely be alive. He should be a very real warning to every startup and VC that thinks they are smarter than the people who have actually been doing it for their whole career. (Elizabeth H. H. Holmes) 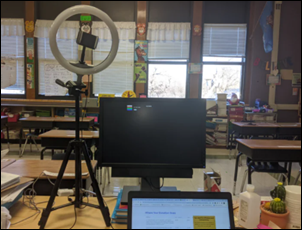 Readers funded the Donors Choose teacher grant request of Ms. R in Oklahoma, who asked for a tripod stand and microphone for conducting virtual classes. She reports, “I am beyond blessed to have people like you continue to believe in the importance in education even during difficult times. Teaching online is difficult as it is, but knowing I have wonderful people like you who are willing to go the extra mile warms my heart and gives me the energy to keep doing the best I can for my students. Thank you once again and may God bless you for your contribution to this wonderful project.”

In England, an NHS nurse is fired for refusing psychiatric help after losing her lawsuit against a hospital that she claimed was secretly hypnotizing her, which she says caused headaches, breathing difficulty, uncontrollable flatulence, and unspecified attacks on her private parts. 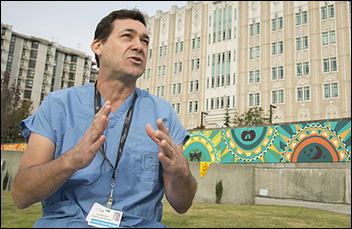 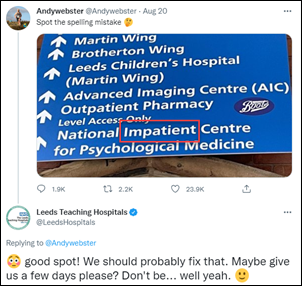 England’s Leeds Teaching Hospitals responds good naturedly to a sign’s spelling error that was called out on Twitter.