The Investor’s Chair Answers: “So, How’s your HLTH?”

In my view, a virtual conference just might be something you find on one of Dante’s circles of Inferno (“For your sins, interminable Zoom Fatigue!”), but I’d had such a good time attending the first and second HLTH conferences, I decided to brave HLTH in person. While I have genuine COVID concerns, the vaccine requirement and relative isolation inherent in its Boston Seaport location gave me comfort to book flights and hotel, and I breathed a serious sigh of relief when HLTH announced a testing requirement. Yet again, I’m glad I attended. 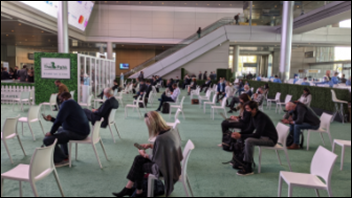 I was curious how well the onsite testing would work. Other than some app glitches (which could have been user error), I found it very low friction. Show up, do some app stuff, and then get a gentle nasal swab (not nasopharyngeal) and sit for 15 minutes before being admitted to the festivities.

While I didn’t attend sessions since crowds still scare me, I heard mostly positive things about them as a view to the future  — or occasional chest thumping and self-congratulation — rather than actual actionable knowledge one could benefit from. As I’ve observed in the past, for most attendees, HLTH is more about networking than learning. I believe this is by design, and as the saying goes, “the medium is the message,” as HLTH is all about UI/UX. While some called it “overproduced,” I like that aspect. 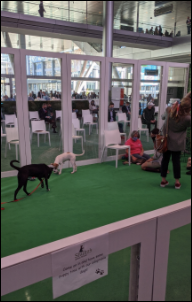 Stressed from waiting for your results? Here’s dog rescue for puppy cuddles. 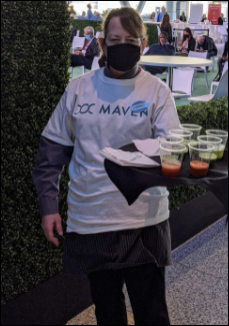 Tired from the wait? How about a juice shot?

Shoeshine? Haircut? Coffee? Snacks? All here for your enjoyment courtesy of one or another HLTH sponsor!

Echoing an earlier HIStalk comment by my friend John Moore, the event seems much better suited for business development (vendor to vendor) than customer acquisition, so sponsors and attendees should go in with eyes open. This seems supported by a conversation with one fairly early-stage company CEO I met with who told me she had brought a large team of folks to introduce them to the broader concept of health tech, why it’s important, and to network and discuss partnerships. 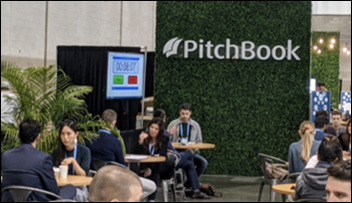 Also echoing John’s view, it is definitely investor-focused, even more so than HIMSS has become. In addition to the off floor conference rooms and the side of floor meeting pods that I gather weren’t cheap, there was actually a speed dating area sponsored by Pitchbook (a data source used by investors and bankers) for 10-minute sessions complete with shot clock for “Funding Founders.” Quite a few strategic investors such as Philips and Cigna had large booths with comfy chairs free for the occupying as well. 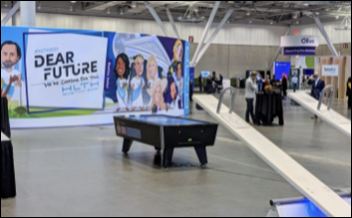 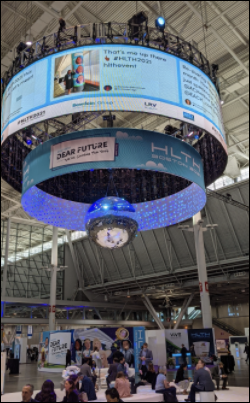 and the disco ball, which did make for a great meeting landmark.

In the final analysis, I’m once again glad I went, or at least I was once I did a post-event antigen test. If you’re going primarily to acquire new customers, I would have some second thoughts and look for some proof points. For me though, it was a chance to see many of my conference buddies who I’ve really missed, learn a few things, and, best of all, meet with over 25 people over the course of a couple of days. Could I have picked up the phone or opened a video window instead? Sure, but to this author, it’s just not the same. If those are your goals, HLTH is well worth it, and I’ll hope to see you next year in Vegas!

Ben Rooks has now attended every (non-virtual) HLTH, 25 HIMSS, 11 Health Evolution Summits, and JPMorgans as far back as its H&Q Days. He’s also been proud to write this column for HIStalk for over a decade, albeit not often enough, so feel free to email him questions or ideas for future installments. He also really enjoys his day job at ST Advisors.