The big news in the public health informatics space last week was the transition of pandemic data tracking to the Centers for Disease Control and Prevention. The organization owned tracking prior to a shift by the previous administration, and now the HHS Protect platform will fall under the oversight of the CDC. It’s been a couple of years of ups and downs for the agency, with a constant need to evolve its guidance based on data that has been at times difficult to obtain and manage. One would hope that the pandemic would allow for greater visibility into the public health space, and better tools for managing communicable diseases. However, given the fragmentation in our society these days, my hope is tempered by the reality of the situation.

The Journal of the American Medical Informatics Association published an interesting article looking at whether templates are beneficial for creating EHR clinical notes. The authors looked at 2.5 million outpatient visits across 52 specialties and found that templates were used to create clinical documentation 89% of the time. Their findings included a significant presence of individualized templates — over the two years of the study, 83% of templates were used by only one clinician. There were over 100,000 unique templates in the system, which could cause issues during system updates as well as when policy changes might require changes to thousands of templates at a time. They also note that individualization may lead to providers using templates that are outdated.

The authors note that health systems would benefit from governance, managing templates with standards for naming, documentation, and appropriate use. The study concludes that there need to be standards for templates if organizations want to improve quality. I’ve always worked in organizations that had significant structure around the creation of custom templates, sometimes to their detriment. Thinking about a system with over 100,000 unique templates, I understand even more why it’s beneficial to have some rigor around customization. Especially when templates are being used to support patient care, it’s important to have a discussion around whether there really is a need for each member of a department to have a unique template or whether there can be consensus to create standardized templates that support evidence-based care as well as help with efficient documentation.

Many technology vendors are still having virtual user conferences, not willing to risk significant expenditures on events that can be impacted by pandemic uncertainties. Some healthcare organizations are still not allowing travel outside the local area or the state and others have slashed conference budgets. A friend of mine who works on the vendor side was excited to attend an in-person conference, sponsoring several refreshment breaks as well as staffing a booth in their exhibit hall. Unfortunately, between the time of signing the exhibitor contract and the actual conference, the organizers elected to offer a virtual track but failed to notify exhibitors. In-person attendance was only two-thirds of what had been promised, which definitely changes the return on investment. I understand offering a virtual track, but that’s no excuse for not notifying vendors and sponsors, especially when there isn’t any opportunity provided for them to reach virtual attendees. 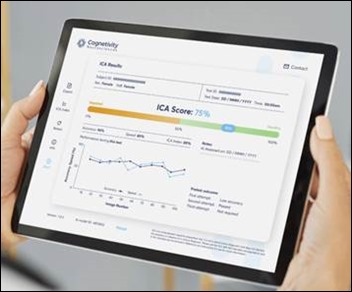 The US Food and Drug Administration recently gave marketing clearance to Cognetivity Neurosciences for its CognICA integrated cognitive assessment tool that allows for the early detection of dementia. The artificial intelligence-powered test is performed on an iPad and is said to allow for detection of early cognitive impairment without cultural or educational bias. The platform can be used for large-scale self-administered testing and integrates with electronic health records. The test previously received European regulatory approval as a medical device and is in use by primary and specialist clinics in the UK National Health Service.

My former clinical employer is still suffering from significant staffing shortages, resulting in temporary closings of some locations and limitations on patient volumes at others. They’ve gone so far as to start their own emergency medical technician training program to try to grow their own staff, but that will take months to bear fruit. The reality is that it will take months if not years to build the healthcare labor market to where it needs to be, not only to recover from the pandemic, but to prepare for the aging of the US population. In order to assist, the US plans to spend $100 million through the National Health Service Corps to help address the problem. The program is targeted to match primary care physicians with communities that need them, providing loan repayments and scholarship funds in exchange for a term of service in an area with a shortage of health professionals. States have until April to apply for grants, which could be as high as $1 million annually.

I’ve written in the past about the evolution of clinician communications, and a recent JAMIA piece caught my eye with its title, “It’s like sending a message in a bottle.” The article looks at the consequences of one-way communication technologies in hospitals and how clinical workflows are impacted by workarounds. The study looked at four US hospitals during 2017 and involved researchers spending two weeks shadowing clinicians, conducting interviews, observing, and holding focus groups. They coded their observations to identify preliminary themes as they looked at the primary communication technologies of pagers and telephones. They concluded that many of the workarounds involved the one-way nature of communication, varying access to different technology types, and mismatches between available technology and workflow needs. I’m sure no one who has ever worked in a hospital would disagree. I would be eager to hear reader thoughts on the best vendor solutions for two-way communication.

Got a sexy communication solution that you want to share with the world? Leave a comment or email me.