I’m boycotting HIMSS. Not interested in attending when the keynotes get less and less relevant or even offensive. (Garrnut)

Re: 3D mammograms. I’ve also heard that more “stuff” shows up on 3D imaging, requiring more follow ups and six-month instead of one-year cycles, adding even more to the bottom line than the $50 bump in the initial fee. (Bob)

Discerning the financial health of an IT vendor in healthcare doesn’t require AI nor Machine Learning algorithms. Basic common sense is all that’s needed. The more cryptic the language, the more creative language used by executives to describe basic economics and forecasts , the more you know you’re listening to BS. It’s all in the numbers. (El Jefe)

Ancestryhealth. Interesting. People won’t willingly share a Social Ssecurity number with anyone, yet will gladly send off DNA to organizations who have no obligation to tell you exactly who / what they’re sharing with their partners. “You are not the customer, you are the product” – Pernille Tranberg. (ellemennopee)

Researchers find that an Optum-developed population health management algorithm introduced racial bias in ranking healthy white patients the same as sicker black patients. They found that adjusting the algorithm to predict the number of chronic illnesses a patient will likely experience in a year – rather than the cost of treating those illnesses – reduced the racial disparity by 84%, emphasizing the importance of understanding the data that was used to train the algorithm.

The Iowa Hospital Association fires its VP of communications for his criticism of the governor’s healthcare track record on Facebook, which he he claimed was supposed to be funny as it was “kind of in a Donald Trump language, kind of an over-the-top, hyberbole thing” that went wrong when a “small but powerful” group of hospital association members objected.

Investigation of patient abuse allegations at Laguna Honda Hospital yields 130 pieces of privacy-compromising evidence from photos and videos shared by six employees who have since been fired. 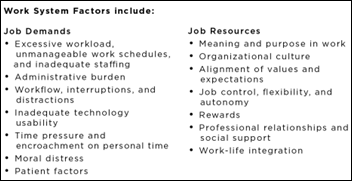 A National Academy of Medicine report finds that half of the country’s doctors and nurses are experiencing significant symptoms of burnout that increase patient risk, malpractice claims, absenteeism, and turnover at a cost of billions. They conclude that clinicians are bearing the brunt of a dysfunctional healthcare system that forces them to work long hours, mires them in bureaucratic record-keeping, keeps them worried about malpractice lawsuits, and forces them to work around a lack of resources. A co-author observes that laws are turned into regulations that are made into policies that take the most conservative path for legal protection, such as requiring clinicians to log in several times each day because of privacy concerns.  They also note that hospitals force doctors to complete long checklists full of often-irrelevant items so they can bill the maximum amount.

New York Jets guard Kelechi Osemele, apparently worried that his employer doubts his claims of a shoulder injury because they’re fining him for not showing up for practice, posts his doctor’s surgery recommendation to his Instagram.