This is inspiring and has so much more potential for healthcare. So many new reimbursements focus on patient engagement (CCM, RPM, PCM, BHI, CoCM). Like Dr. Bhavan and her team at Parkland demonstrated, patient involvement / engagement creates better outcomes. We focus so aggressively on the delivery of healthcare, but who has studied the receipt? Think of this for a second: we’re at a place in healthcare where actively and persistently involving the patient is viewed as disruptive and innovative. Dr. Bhavan’s model included education and team work – to make it easy for the patient – and they certainly did their part yielding massive reduction in re-admission and higher satisfaction. (Matt Ethington)

For those of us who participate in this [Epic] market as HUMAN resources (FTE or contractor), it is a strange situation to learn that after working hard to be offered a role /,contract, your customer / employer will have to submit you to Epic for ‘approval’ before they agree to grant you access to both (a) the resources at Epic’s UserWeb and (b) potentially access to Epic at the client site (even if you’ve been hired). It’s a sobering moment to jump from one employer to another or in and out of the contractor-FTE world to learn that you are not actually in charge of the outcomes of your own decisions and that you never agreed to the terms that are being imposed on your life and livelihood. (Code Jockey)

The restrictions that Epic places on his customers, employees, and third parties on hiring is so frustrating. While I understand they want to protect their IP and reduce poaching, it creates such a toxic attitude among their employees and frustrations to employees who have life changes that require them to move away from Epic. Rather than being able to utilize your skills in the free market, they use a big stick to hold people hostage. They extend those restrictions on their own customers, keeping them from hiring really qualified people that could help make them successful and avoid really expensive consulting costs. It also make hiring Ex-Epic people in the Madison job market incredibly risky because many are just trying to burn their one-year non-compete rather than looking for a longer term role. (Epically Annoyed)

I’ve worked on two Cerner implementations and two Epic implementations. The Cerner implementations had, in my opinion, sleazy salesmen who showed up to take the director out to lunch, drinks, strip clubs, or whatever it took to get the sale and expand the services. The Epic implementations, I never saw any of that going on, not that some client sites didn’t want to be wined and dined and tried to get the Epic AC/AMs to do that. I think you are correct in stating that because Epic is not a public company, Judy does not have the Wall Street pressure, but I also think there is just a generally more clean approach from Epic overall. (X-Tream Geek)

While that [in-hospital employee] telemedicine booth is kind of odd, I think a lot of people still underestimate how much employees don’t want their employer to have permanent access to their full health record, regardless of what kind of end user confidentiality might sit between other colleagues and their data. I know a lot of people who would gladly talk to a booth over anyone that’s also employed by their employer. Though I would bet there’s some type of interoperability that exists between their existing records and this vendor. (Sam Lawrence)

Insurance exists because people overall are risk averse, but from your comments, that’s not you. You sound pretty confident of the outcome, so you prefer to gamble. It’s interesting that if you take the gamble and lose, it’s not actually you paying for it. If you’re uninsured or under insured today (because you don’t feel like you need it), and then a catastrophic event happens, your fellow taxpayers will be conducting a wealth transfer to you. Would you plan on refusing it because it’s unfair to them? You’re also gambling that by the time you need the healthcare system, all the Boomers will be gone and the rational Gen X, Gen Y, and Gen Z folks will vote in an affordable and responsible system. This is a huge gamble, and by George I’d love if it ended up going your way. However, the idea that once the Boomers are gone the way will be clear for sweeping reform is a massive oversimplification of US healthcare politics. (TH)

The youngest Baby Boomers are 54, so they have another 25+ years of living to do before they hit the median life expectancy, by which time us Gen Xers will be in our 60s and the Millennials will be experiencing back spasms, trick knees, and menopause, so we’ll all be oldheads together. GenZ is going to come along and wipe us all out, which is fine – they are the ones really inheriting the mess, so if they want to transform society “Logan’s Run” style, I can’t say I blame them. (HIT Girl)

A hospital doctor in England fails to convince a review board that the reason he squeezed a nurse’s bottom was euphoria that was caused by a drug interaction between his allergy pill and Pet Remedy, a calming spray he was using on his dog during a thunderstorm.

The Ohio Board of Pharmacy cites three former pharmacists at the now-closed Mount Carmel West Medical Center (OH) for failing to intervene when high doses of opioids were ordered by ICU doctor William Husel, DO, who faces 25 counts of murder involving inpatient overdose deaths. The board noted that the pharmacists sometimes did not verify drug withdrawals from automated dispensing cabinets until after the drugs had already been administered.

Experts say hospitals are creating an “epidemic of immobility” in which hospital patients are forced to stay in bed, contributing to muscle weakness that can cause life-threatening falls afterward. One study found that one-third of patients aged 70 and older left the hospital more disabled than when they were admitted. Patients are often forced to remain in bed, but may do so voluntarily due to pain or weakness, IV lines that make it hard to walk, a lack of employees to help them, and the reluctance to walk down hospital hallways in flimsy gowns. 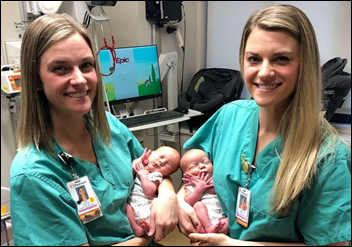 Identical twins who work as nurses at Piedmont Athens Regional Medical Center (GA) work together for the first time in helping deliver another set of twins. That’s Epic photobombing behind them.

Peyton Manning stars in a fun video spot for the children’s hospital bearing his name at Ascension St. Vincent in Indianapolis, to which Manning has donated a reported $50 million since 2007. He played quarterback for the Indianapolis Colts for 14 seasons through 2011.