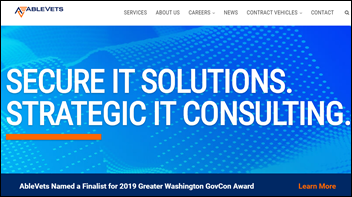 The company — formed by former Navy oncologist Wyatt Smith, DO in 2012 — reported $96 million in annual income and 345 employees for 2018. It counts among its clients DoD, VA. and HHS.

Cerner will operate the company as a wholly-owned subsidiary. AbleVets is a subcontractor for Cerner’s VA project.

Smith has an extensive health IT background, having served as VP of healthcare for Agilex, a consultant to ONC, deputy CIO for the Military Health System, and manager of the DoD’s AHLTA EHR. He is board-certified in internal medicine, hematology, oncology, and pathology.

The US Digital Service recommended in March 2019 that private-care eligibility software developed by AbleVets for the VA be scrapped because of flaws that were introduced by a rushed timeline.

Cerner previously hired David Waltman — who had led the VA’s VistA modernization program for two years before moving to AbleVets for a few months — six weeks after the VA chose Cerner in a $10 billion, no-bid contract.

Most poll respondents would be wary about seeking treatment from a hospital that is known for suing patients over unpaid bills.

New poll to your right or here: Which industry awards do you find meaningful? I ran this same poll a couple of years ago, so it will be fun to compare results. I also added an “enter your own answer” option in case your favorite award wasn’t listed.

I saw someone on the new season of “Goliath” who looked a bit like Dennis Quaid, but quite different than the lithe, beaming HIMSS09 keynoter. It actually was Dennis, now 65 and no longer married to third wife Kimberly, who was the mother of the heparin-overdosed twins (born by surrogate in 2007 – Meg Ryan was wife #2) who were the subject of their medication error lawsuit against Cedars-Sinai that questionably earned him the HIMSS speaking spot. Cedars and its employees made all the mistakes, but Quaid went after the deep pockets instead in suing the manufacturer of the drugs and eventually settling with them (Cedars also paid $750,000 after the Quaids hinted that they were considering litigation). He formed a patient safety foundation, merged it almost immediately afterward with the Texas Medical Institute of Technology (it, too seems to have faded), made a couple of related documentaries, and hasn’t shown much patient safety interest in years. HIMSS gave his foundation a $10,000 check on stage back in 2009 in addition to whatever speaking fee he required. These days, Dennis is ripped like crazy, frolicking on the beach with his 26-year-old girlfriend (now fiancé, just announced), and always pictured by me as the swaggering Gordo Cooper in “The Right Stuff” in an acting tour de force that Tom Cruise can only wish he had delivered in “Top Gun.”

Oracle CEO Mark Hurd died Friday of unspecified causes at 62 following a month-long, health-related leave of absence. He was also CEO of HP from 2005 to 2010. 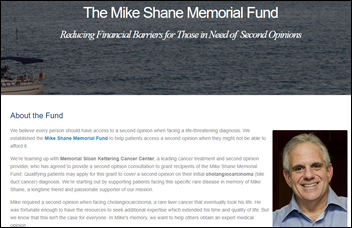 EClinicalWorks announces that it supports interoperability with both Carequality and CommonWell.

A CBS News poll finds that Americans are more worried about healthcare costs than whether everyone has health insurance. Less than half worry about the quality of care and 79% say they are satisfied with the care they receive. Nearly half say big changes are needed to the US healthcare system, while another 30% think it should be rebuilt from scratch.

NHS gives Google access to five years’ of patient data from several hospitals. Five of six trusts that had signed data-sharing deals with Google-acquired DeepMind have signed new agreements now that the company’s projects have been placed under Google Health. Critics say such agreements were previously ruled illegal, the hospitals won’t say how much Google is paying them, and patients aren’t aware that their data is being shared with a for-profit company.

HCA-owned Mission Health (NC) notifies an unspecified number of consumers that its online store contained malicious code that was sending their information elsewhere from March 2016 through June 2019. 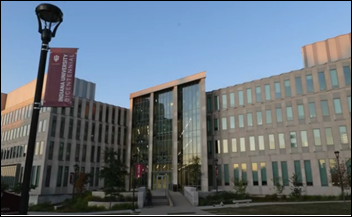 Indiana University will use a $60 million donation from alumnus Fred Luddy —  founder of help desk software vendor ServiceNow – to establish an artificial intelligence institute whose initial focus will be digital health. 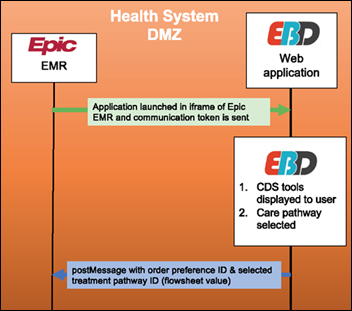 Yale clinicians describe their work to embed clinical decision support for ED prescribing of buprenorphine for opioid use disorder with its Epic system, after reviewing Epic’s capabilities and finding them insufficient. They created an EHR-integrated web app using Epic Active Guidelines (since Epic did not support SMART on FHIR at that time). The eventual integration was seamless, launched from the patient chart navigation bar in an iframe with direct, secure communication. The authors note that such a project involves challenges and recommends that customers focus on updating interoperability standards to support services such as Enterprise Clinical Rules Service. 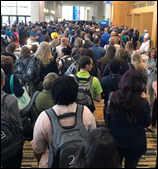 EClinicalWorks held its national conference in Orlando this past weekend, October 18-20, as it celebrated its 20th anniversary.

A ResMed-commissioned survey of 3,000 Americans finds that 56% monitor their health with at least one digital tool; 60% attempt to diagnose themselves via the Internet; and half want technology to improve communication with their PCP, specifically to be able to share information with them. The survey didn’t mention which tools that more than half of consumers are supposedly using, so I’ll remain skeptical in the absence of detailed methodology. 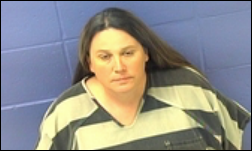 The Arkansas Department of Human Services shuts down parts of its claims portal following the arrest of an optometry practice’s office manager who discovered that she could “input any number she chose” without the system flagging questionable values. The woman, who is the wife of one of the practice’s optometrists, is charged with filing $600,000 in fraudulent manual Medicaid claims in cases where a patient was insured by both Medicare and Medicaid. Fun fact – the attorney general’s investigator who signed the charging affidavit is named Rhonda Swindle.