[On Hims-style telemedicine] The reason it costs so much is because he sees a physician who the health system has to pay a couple hundred grand a year and the health system itself has high overhead (rent, administration, etc.) that it needs to bring in revenue to cover. Medicare for all isn’t going to change that cost equation unless it puts substantial downward pressure on physician compensation. Hims has got it worked out where they have low labor costs for a variety of reasons and they’ve got low overhead besides marketing spend. Why can’t someone replicate that for prescription renewals or other routine, almost secretarial care? (IANAL)

Treating depression or anxiety isn’t just a matter of writing a quick script. The same is true of virtually any legitimate prescribing. If a drug is sufficiently powerful to work in treating a clinical condition, then it’s also likely to have some potential for side effects, interactions with other drugs, or be problematic depending on the patient’s underlying health conditions. Making those determinations and identifying whether the patient is best served by medication and/or psychotherapy, isn’t a 5 minute process nor is it best served by seeing a different person for 5 minutes every year. (MedicareForAll)

Traditional doctors are way too expensive to be handling these issues for the young and low income. People might get suboptimal treatment via episodic care, but paying out the nose for every little thing harms people in its own way. We can’t choose the option that protects health system incomes over patient incomes every time. Americans just do not have the money. Sometimes paying a lot less for care that is a little lower quality is what people want. (Associate CIO) 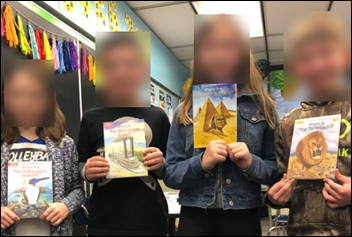 Readers funded the Donors Choose teacher grant request of Ms. R in Pennsylvania, who asked for a history book series for her third grade class. She reported in early March, “When I told my students that we were getting new books, a huge cheer went up in the classroom! When I told them what books we were getting, they were even more excited! The students have been reading our new books since they were delivered to the room, and you can tell how much they love them. After reading a book, students have the opportunity to share their book with other students. This gives students a chance to practice their summarizing skills (as they tell others about their book) and their persuasive skills (as they convince others to read the book). But most importantly, it gives them a chance to share their love of a book and give others a chance to enjoy the book as well.”

I took advantage of some great third-party matching to fully fund these Donors Choose projects, courtesy of funds from my Anonymous Vendor Executive:

Doctors of osteopathic medicine — whose DO credential allows them to practice identically to their allopathic (MD) peers – worry that political arguing over the hospital treatment rendered to President Trump by Sean Conley, DO has caused some to question why the president isn’t being treated by a “real doctor.” Some people confuse DOs with chiropractors because they receive extensive extra training in the musculoskeletal system (75% of whom don’t use it in their practice) and focus on preventive medicine, and in fact MD training is moving more toward that of DOs in its newfound emphasis on prevention and holistic medicine. It gets more complicated for foreign-trained doctors, whose diploma may show MBBS, MBChB, BMED, BMBS, or other credential that is equivalent to an MD, some of whom misstate their LinkedIn credential as having earned an MD degree from a school that does not issue that credential. I’ve read that surgeons in the UK are addressed as Mr., Miss, Ms. or Mrs., which is interesting, and I’ve seen quite a few health industry folk in the US append “Dr.” in front of their names for possessing degrees that are not only non-medical, but in some cases are from unaccredited schools or were conferred as honorary degrees, where using the “Dr.” title is just plain wrong. And of course it is never correct to bookend the social title with the professional credential, in the form of “Dr. John Smith, MD.” 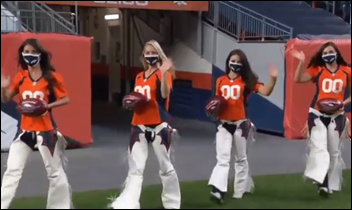 The Denver Broncos honor five of their cheerleaders who are healthcare workers in their day jobs, among them an ED nurse practitioner, a physical therapist, and a trauma nurse. 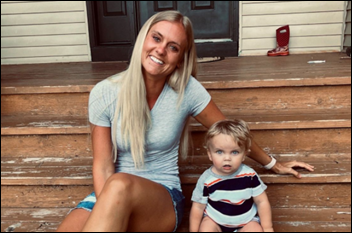 A traveling nurse who spent two months on the COVID front lines in New Jersey this spring donates a kidney to a one-year-old boy.

The China-based manufacturer of a $200 Bluetooth-controlled male chastity belt sex toy responds to a reported security flaw — in which hackers could lock every one of the devices worldwide or steal user information — by suggesting that users could break the device open with a screwdriver if needed. One of the security researchers wasn’t enthused at that prospect, saying, “The forceful use of a screwdriver in close proximity to a very sensitive area of the anatomy seems very unwise,” which might be explained by the company’s tagline, “love hurts.”