Meditech will end its status as an SEC public reporting company by running a reverse stock split that will allow it to de-register its shares.

Shareholders with fewer than 5,000 shares will be paid out at $45 per share to reduce the shareholder count to under 300, which will allow the company to take itself private.

Meditech says that its public reporting status benefits its competitors, incurs costs, and provides little benefit since its shares are not traded on any public market.

More than 1,500 current and former shareholders will receive a cash buy-back that ends their company ownership and will trigger capital gains taxes.

Shareholders will vote on the proposal, but board members have unanimously approved it and own enough shares to ensure its passage.

From Sea Legs: “Re: Allscripts. Another big round of layoffs, restructuring and realigning regions yet again, and rumors that some products will be sold off.“ Unverified, but reported by several people claiming to be employees on TheLayoff.com. 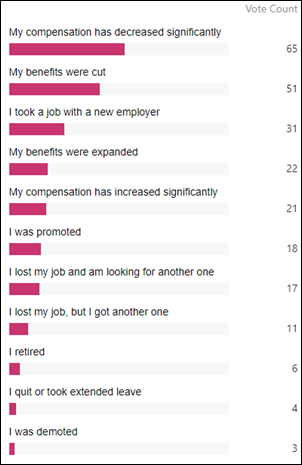 Poll respondents who have experienced pandemic-driven job changes most often report seeing decreased compensation or benefits, but quite a few have changed jobs and a good number saw their compensation and/or benefits improved or were promoted. I didn’t offer a “no change” option because I was interested in the changes rather than the percentage who have or have not experienced them.

New poll to your right or here: what is your most valued use of LinkedIn? I only use it to verify the job title, job history, and educational credentials of someone I’m writing about or to grab their headshot, but lately Microsoft seems to be attempting to turn it into a businessperson’s Facebook, a place where overly aggressive salespeople are unleashed to pester strangers with boilerplate pitches, and a publishing site for articles of sometimes questionable quality.

StayWell, which includes Krames patient education solutions and the StayWell employee health platform, renames itself to Krames. The company was acquired by Internet Brands, which owns WebMD and Medscape, from drug maker Merck in March 2020. 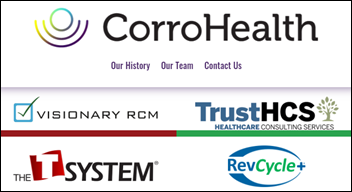 Four health IT companies are acquired by private equity firm The Carlyle Group and will operate under the single brand of CorroHealth – TrustHCS (coding services), Visionary RCM (coding services), T-System (emergency documentation technology), and RevCycle+ (coding solutions). The SEO will be Patrick Leonard, MBA, who spent several years at McKesson before moving into health IT investment. 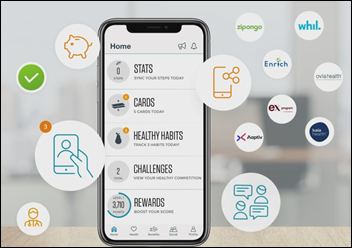 The VA tells a House subcommittee that it is considering retiring the My HealtheVet portal in favor of Cerner’s MyVAHealth, but that move would cost $60 to $300 million since it isn’t included in its Cerner contract. The VA will initially run the two portals in parallel, with Spokane-area veterans getting the Cerner portal by default after the Cerner go-live there this month, while all others will continue to access MyHealtheVet.

Former venture capital executive David Wagner, who received loans and grants from Connecticut’s economic development agency while he was facing fraud allegations in other states, pleads guilty to securities fraud and wire fraud charges in a plea deal. The state’s money was given to CliniFlow, a company that Wagner controlled that he said would move three medical technology startups to a building owned by Hartford Hospital in a $45 million project that would create 195 jobs. Prosecutors say it was a Ponzi-like scheme in which money from new investors was used to pay off previous investors or to pay Wagner’s personal expenses. The startups were SpearFysh, Vox MediData, and 3si Systems.

HHS issues a second $10 million contract to TeleTracking Technologies for its HHS Protect COVID-19 hospital data collection system, even as Congressional committees are investigating the circumstances under which the company was awarded the no-bid first contract. The next $10 million contract extension is due in March.

Regeneron presents the first results from early studies of its monoclonal antibody cocktail three days before the product was administered to President Trump. The placebo-controlled trial of 275 asymptomatic to moderately ill people found that the drug has little effect on those who have measurable coronavirus antibodies, but it reduces viral loads and symptoms in those who don’t. Eli Lilly reported similar results two weeks ago from testing of its single-monoclonal antibody, also reporting since its study is further along that it reduced hospitalizations and ED visits. Regeneron says patients should be screened for virus levels and antibodies to decide whether to use its product, while Lilly thinks theirs should be offered to all patients who are high risk because they are elderly, have diabetes, or are overweight.

Public health experts question the White House’s sole reliance on Abbott’s quick COVID-19 test as protection, in which event attendees who tested negative are told that masks and distancing are unnecessary. Abbott’s ID Now test has not been approved as a surveillance tool because of limited sensitivity that can give false negative results, with FDA’s emergency use authorization covering only people with symptoms. Quarantining was not done by the President and staffers, who traveled to public events after the known positive test result of Hope Hicks, while Attorney General Bill Barr, Vice-President Pence, and other White House and campaign officials say they won’t quarantine even now despite CDC recommendations. CDC guidelines call for a 14-day isolation period for anyone who has come in contact with someone who is known to be positive, regardless of the results of their own test or lack of symptoms. Minnesota’s three Republican congressmen flew home on a Delta flight Friday night in violation of Delta’s post-exposure policies.

India’s recently announced National Digital Health Mission will provide each citizen with a national health ID card that is tied to an account that will eventually include their complete medical record from all providers and serve as a research database, but experts wonder how many hospitals (especially private ones) will participate in the voluntary information-sharing program. They suggest that the country follow the models of Thailand and India, whose digital platform integrates with private health services but is deployed at the district rather than national level to keep participant counts per system at a reasonable several million.

Clinical trials software vendor EResearch Technology is hit by a ransomware attack, forcing contract research organizations – some of which are managing COVID-19 vaccine trials – to revert to paper. The company says that three-fourths of the drug trials that led to FDA approvals last year were managed using its software.