[On Epic’s mandatory return to campus] Most egregious, for a company that beat into me from day 1 that I must make clear recommendations supported by data, they have no data. They released multiple products during the pandemic while working from home. Support ticket closure rates are up 10% in some applications. They have no metric for productivity, but are willing to die on the hill of “magical, spontaneous hallway conversations.” They’ve failed to create a culture that can exist outside of their physical workspaces; I was part of the very first inter-office chat pilot at Epic – Skype in 2017 – and had to fight tooth-and-nail for its roll-out. Even during non-pandemic times, I primarily called into my on-campus meetings because getting there would’ve taken 15 minutes. This is an abject failure of leadership from Judy, Carl, and the rest of the executive team. (Ex-Epic)

Bill Gates used to say that early on in the life of Microsoft, he used to eyeball how many cars were in the parking lot when he left (which often used to be late in the evening/night) to get a sense of how hard his people were working. He later admitted that it was a rather naive and inaccurate way of measuring productivity. And that was 40 odd years ago! Well, Bill G and Microsoft grew up! Seems like Judy and Epic haven’t. (Ghost_Of_Andromeda)

[On Teladoc’s acquisition of Livongo] Mr. Tullman and Mr. Shapiro poised to cash out (again). As has been proven with Allscripts and now here, it’s easier to raise money for a startup than it is to actually run a company. (It’s All Good)

[On Teladoc’s acquisition of Livongo] No quarterly profit ever and an 18.5 billion price tag… Is there that much waste reduction in the US healthcare non-system to account for such strange valuation? (Eddie T. Head)

Siemens acquires Varian. Ggreat news for Varian shareholders. Sad to see another technology company move to non-US ownership. Will be interesting to see how things shake out when Siemens decides to “integrate” the business. (Robowriter) 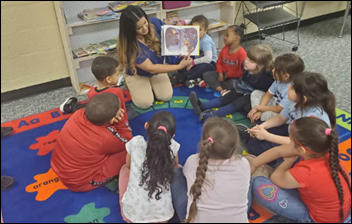 Readers funded the Donor’s Choose teacher grant request of Ms. S in Philadelphia, who asked for carpet and bean bag chairs to create a reading center for her after-school kindergarten program. She reported in February, “When my students first saw the new rug and bean bags in the library area, they asked me, how did we get that in our class? Can we keep it? I answered them how Donors Choose helped us get a funder to donate what we needed. They were surprised that a stranger gave us money . They were super excited and wanted to lay down on the rug to read. We follow D.E.A.R. (drop everything and read) in our schedule. With the new cozy area, the students are more interested in literature. The students enjoy sitting in bean bags, or laying down on the rug to read. They go and pick a book of their choice and start reading enthusiastically. We also use the rug to play different games, practice the numbers and the alphabet. Sometimes, the students just lay down on the carpet to relax. When they are having a bad day, they sit in bean bags and distract their mind. It helps students to calm them down and rejoin the class group when ready. Having a cozy and safe library area has been a life-changing experience for them.” 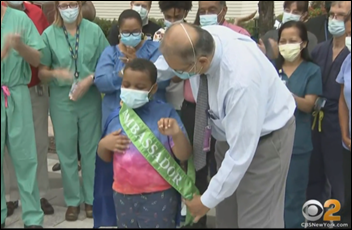 Maria Fareri Children’s Hospital (NY) designates eight-year-old Jorden Hutchins as an ambassador to the hospital after he survives a COVID-19 infection with Multi-System Inflammatory Syndrome in Children, which involved being placed on a heart-lung machine, undergoing heart surgery, and having multiple strokes and kidney failure. 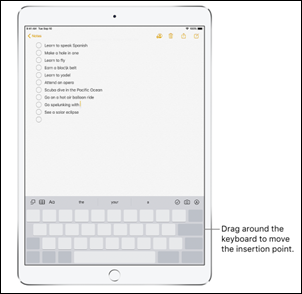 Here’s a tech tip I learned for editing a web address or any other text on the IPhone or IPad. Hold down the on-screen keyboard’s space bar until it turns gray, which turns the keyboard into a trackpad for precise cursor positioning. 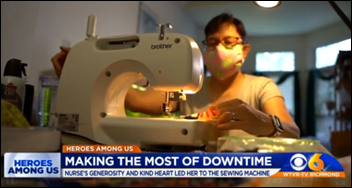 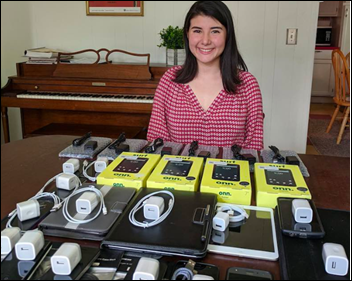 Volunteers for the non-profit Telehealth Access for Seniors are providing devices, instructions, and free tech support to seniors and low-income communities to support telehealth and digital connectivity with family and friends. Lia Rubel from Vermont (above) has collected 50 devices and raised $800 to help with the mental health of self-quarantined seniors. The organization overall has collected 1,500 used devices, $63,000 in donations, and has 315 volunteers in 26 states. The organization seeks IPhone 4 and above and second-generation or newer IPads, for which it provides data erasing instructions. Their GoFundMe has raised $29,000 so far. The founders are Yale undergrads Aakshi Agarwal, Hanna Verma, and Siddharth Jain along with high school junior Arjun Verma. Agarwal is double-majoring in molecular biology and political science, hoping to purse a law degree and then work in healthcare policy. She also co-founded a college admissions consulting service. 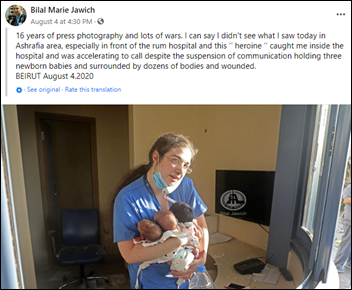 A nurse in an explosion-damaged hospital in Beirut runs to the NICU with a colleague to remove five newborns, captured by a press photographer who said that among the rubble and bodies, “The nurse looked like she possessed a hidden force that gave her self-control and the ability to save those children.”