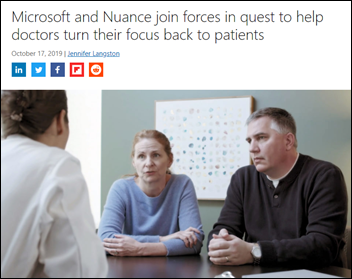 Nuance and Microsoft will co-develop ambient sensing and conversational AI software to enable physicians to pay more attention to their patients instead of on administrative tasks.

Building upon Nuance’s ambient clinical intelligence software (on display at HIMSS earlier this year) and Microsoft’s intelligent scribe service, the new technologies will be rolled out to select end users early next year.

From Henry W. Jones, III: “Re: Epic’s redacted contract that appeared in the SEC filings of Ardent Health Services. Any assessment that the redaction is moderate and the contents are not worrisome (such as the absence of a gag clause) are overconfident. The redaction leaves holes and many provisions that could be contained but not shown (such as IP claims, liability shifting, unique terms and conditions). We know that Epic demands more redactions and secrecy than other EHR vendors and than vendors in non-medical industries. For example, the contract omits in its litigations listing the Epic vs. Tata saga, which involves over 1,000 court pleadings and an initial Epic jury verdict of $900 million (later reduced to $400 million per state statutes). Latency also yields uncertainty and this was a contract signed eight months ago and posted on the SEC seven months ago, so we don’t know what might have changed. The long-term, non-obvious industry impacts of locking customers into EHR contracts merits serious, granular analysis; the devil is likely to be in the many details that are missing here.” Hank is an IT lawyer and consultant. I interviewed him in 2016.

From Skimmer: “Re: HIStalk. How does anyone find the time to read it all?” Many readers think reading everything here provides positive ROI, and I certainly hope that’s the case. I’ve already surfaced the most important or interesting items among the junk, so it’s up to them to pick the parts of what I run that will be most impactful to their careers as professionals who should be taking the time for continuing (and continuous) education. But if they don’t have the time, the news posts run just three times per week (which is a minimal time investment since it’s broken out into easily skippable sections), the Weekender summarizes the week’s biggest news each Friday morning, and the absolutely most important stories appear in my daily headlines. I hope the 90% of readers who say reading HIStalk helps them do their jobs better are finding it worth their time and thus mine.

Champlain Valley Physician Hospital transitions to Epic as part of a $152 million system-wide deployment within the University of Vermont Health Network. 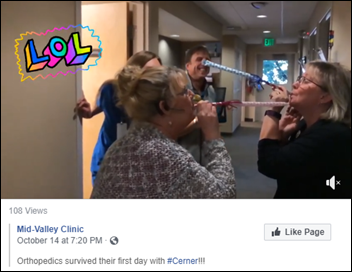 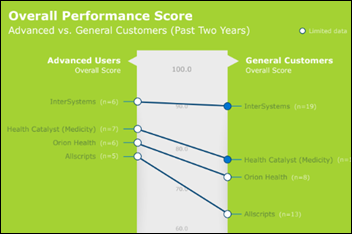 A new KLAS report finds that the HIE technology market is moving to broader use of aggregated data, with advanced users of Allscripts and InterSystems most likely to be using those systems for advanced use cases. KLAS notes, however, that less-advanced users of the Allscripts DBMotion product report dissatisfaction with getting the system up and running, Health Catalyst is consistent in its support but behind in keeping technology promises, Orion Health users say the platform is too rigid to support innovative use cases, and InterSystems customers are strongly satisfied across the board, giving it the highest purchasing energy among the four companies.

WVU Medicine (WV) begins enrolling patients in the National Cancer Institute’s Cancer Moonshot program, one of six organizations funded to use technology to enable patients to report and manage their cancer treatment symptoms.  WVU will use its Epic MyChart to answer patient questions (which can include images or files) and to send out routine surveys, with the patient-entered information flowing back into Epic.

Philips adds the new Sentry Score predictive algorithm to its ECareManager telehealth software, giving clinicians the ability to prepare for patient ICU interventions in under an hour. 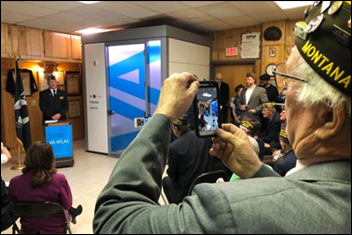 The VA launches a multi-site pilot program that will give veterans access to telemedicine services at local VFW or American Legion posts using Internet-connected healthcare pods developed and donated by Philips. 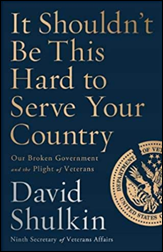 Former VA Secretary David Shulkin, MD authors “It Shouldn’t be This Hard to Serve Your Country,” a book about his 13 months working in the Trump Administration.

The NFL is rolling out a prescription drug monitoring program as part of its more focused efforts on monitoring pain management and opioids. First announced in May, the league’s PDMP will also be used by unaffiliated physicians.

A Nor’easter takes down the EHR and other systems Thursday morning at hospitals that are part of Northern Light Health in Maine. 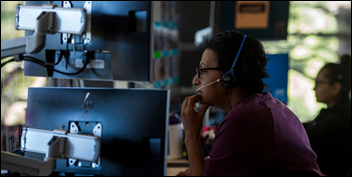 The Colorado Sun profiles the ways state-based hospitals are using AI and machine learning, with innovations ranging from “digital sitter” remote patient-monitoring efforts, to algorithms that predict and cut treatment time for patients at risk for sepsis, to algorithms that can help radiologists identify areas for concern more quickly and accurately. HealthOne CIO Andy Draper says, “We’re right in the very beginning of it. There are a lot of tools that will pop up and we should embrace and love them all and then over time we’ll see what their real potential is.”