Centra (VA) resumes billing and collections after a three-month hiatus caused by glitchy Cerner software that hospital officials say led to rejected claims, delayed billing, incorrect bills, and prematurely sending patients to collections for lack of payment. The $73.5 million Cerner system was installed in 2018, but Centra’s financial team didn’t notice any problems until a few months later. It estimates that 2,200 incorrect billing statements have been sent out.

To rectify the problem, Centra is rebooting its billing cycle, giving impacted patients a 5% discount, and making sure that its customer service reps have had Cerner-specific training so that they can be more empathetic to patients with billing problems.

Centra will continue with the second phase of its Cerner implementation at remaining ambulatory and post-acute care sites next year.

A majority of respondents would have no problem using employer-approved providers if it resulted in a discount on their employer-sponsored health plan. Nevertheless offers the employer perspective: “We have employees who work in at least 5 states today and that will grow. This approach is not at all manageable for a company like ours. I want to be LESS involved in my employees’ healthcare access, not more. I’m ok with paying for healthcare coverage for my employees – but I don’t want to micromanage how they get those services.”

MerryMe offers the employee’s: “Absolutely not. Employers shouldn’t be involved in healthcare – AT ALL. Not insurance. Not in/out of network. Not hey, save $100 if you stop smoking. If my employer or co-worker wants to send around an email saying ‘had great experience at XYZ’ or ‘hey, I found this website and maybe you can save on your Rx like I did,’ fine. Want to do a benefit dinner for a fellow employee who has cancer? Great. Otherwise, keep your nose and ‘help’ out of my business. I don’t trust that costs for types of procedures are not being shared with the employer – and what I’m seeking care for is none of my employer’s business.”

And Sorry that of the too-young-to-need-it: “As a young person who doesn’t use any healthcare right now and expects not to work at a place longer than five years, I’ll take that deal and then continue never going to the doctor. I would be interested to know how much of the cost of health insurance you could knock off this way though. I get the feeling that I’m subsidizing the old people’s healthcare at my company. Eventually we’ll move off employer-tied health insurance (since businesses are starting to hate it) and to something state-funded, at which point the young will still be subsidizing the old but 1. I’ll be old. 2. At least I’ll be able to see what’s going on rather than trying to interrogate my HR rep.”

New poll to your right or here: Would you avoid treatment at a hospital that has a history of suing patients for unpaid bills? Comments (anonymous or not) are welcome, especially if you’ve found yourself on the receiving end of relentless debt collectors.

October 15 (Tuesday) 1:00 ET. “Universal Health Services Case Study: How to Improve Network Design and Management with Claims Data.” Sponsor: CareJourney. Presenters: Mallory Cary, regional director of ACO operations, UHS; Abbas Bader, director of product development, CareJourney. Universal Health Services (UHS), one of the nation’s largest hospital management companies, has more than 350 acute care hospitals, behavioral health facilities, and ambulatory centers across the US, Puerto Rico, and the UK. UHS has collaborated closely with CareJourney over the last three years in building high-performing networks in new markets, managing patient populations as they flow through those networks, and targeting areas for performance improvement within the network. Join the expert presenters for deep insights into network design and optimization. 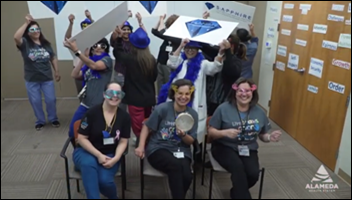 Alameda Health System (CA) goes live on Epic. AHS staff from what looks like every department put together this great video celebrating the install. The $200 million project was first announced at the beginning of 2018. 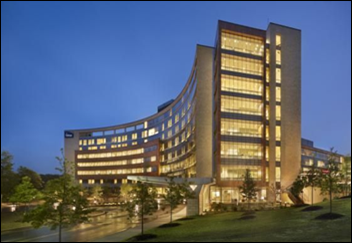 In Illinois, Pivot Point Consulting assists in the implementation of Christie Clinic’s Epic system through a Community Connect affiliation with Carle Foundation Hospital.

Brigham and Women’s Hospital (MA) will use digital lifestyle tracking and telemedicine tools from Fruit Street Health in a six-month brain health improvement study of patients at risk for cognitive decline and dementia.

A look back at WannaCry’s impact on the NHS finds that the 2017 ransomware attack resulted in a $7.6 million loss due to a decrease in admissions and appointments. Over 600 NHS facilities were affected. The health service spent considerably more – some analysts estimate nearly $90 million – on IT to fix the fall-out. 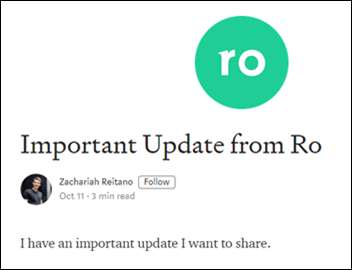 Men’s online health and wellness company Ro alerts customers to a potential breach that occurred when hackers attempted to access information on the laptop of an affiliate physician. The physician’s computer, which was the property of the MD’s health system employer, was infected with malware. Ro fired the physician for violating its Physician Code of Conduct by downloading unapproved software. CEO and co-founder Zachariah Reitano brings up a point relevant to telemedicine vendors who hire physicians with other employers: “The challenge Ro and others face is that, in addition to securing our own systems, we need to account for systems outside of our direct control. Ro has taken and will take a number of steps to implement additional security measures to help further protect personal information, including enhancing the security on our physicians’ computers.” 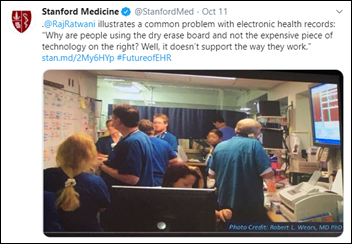 Stanford Medicine (CA) hosted its second annual EHR National Symposium featuring speakers from its health system, Epic, ONC, UnitedHealthcare, Microsoft, Cleveland Clinic, Cerner, and Livongo, among others. Videos from the event should be on the symposium’s website soon. 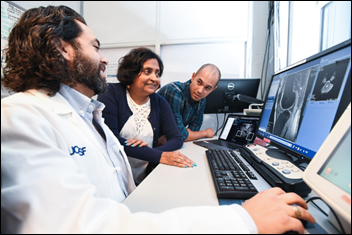