Appreciate the shift in language from “follow the science” to “evidenced-based.” The latter may be less intimidating and widen the door for more shared decision making as the patient and provider collect and review the “evidence” together. (Quynh Tran)

Love it when someone relatively new to the industry has all the answers and calls out the “crooks in the room” who don’t have all the answers – or does have them but they don’t want to share them?! (Steve Ex Twitter)

Am I the only one who thinks that the ratio of “Innovation Conferences” to “actual implemented, at scale innovation” is probably the highest in our industry compared to other sectors? Somehow, other industries keep making my life better through innovation without needing to have some many innovation conferences :). What gives? (Ghost of Andromeda)

Can we talk about how pretty much all of the interoperability standards for healthcare are not secured? HL7 is not an inherently secure protocol. DICOM is not an inherently secure protocol. I don’t think X12 are inherently secure protocols either. The protocols don’t support any native encryption and have little to no authorization/authentication mechanisms. So our healthcare InfoSec friends basically have two overlapping options: 1) encapsulate these messages in a protocol that is secure; 2) Use network microsegmentation to limit which endpoints on your network are allowed to talk to your databases. The problem with #1 is that while it’s doable in theory, and there is even an RFC for doing this with X12, I haven’t seen any commercial products or solutions that implement it. (Elizabeth H. H. Holmes)

Correct that HL7 v2, DICOM, X12 etc. do not have security in the protocols themselves – they are routinely secured by microsegmentation as detailed. I’m not persuaded that it’s more mistake prone than the alternatives – and it’s at least easier to test (but does need testing). FHIR is different – it’s built on the the web stack in order to get web level security. But as the report shows, that requires actual commitment to security to get right. But #2: a commit to metasploit… sounds like a good idea for someone to do. (Grahame Grieve) 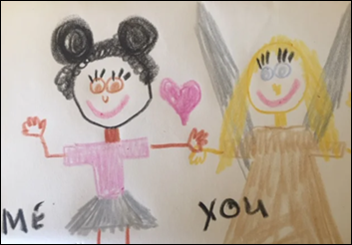 Readers funded the Donors Choose teacher grant request of Ms. K from Arizona, who asked for hands-on math learning tools for her special education class of fourth and fifth graders. She reports, “The materials have arrived, and my students have loved using them during virtual teaching and learning! Thank you for supporting education and helping students develop a love of math! These math materials are awesome at inspiring students to keep learning and to be able to visualize important math concepts.” 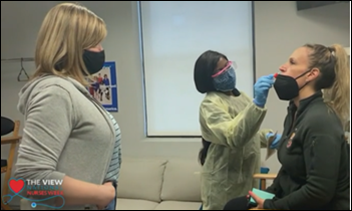 TV show “The View” demotes its health and safety manager Nurse Wendy after two fully vaccinated hosts tested positive – apparently falsely –-for COVID-19 minutes before Vice-President Kamala Harris was scheduled to go on in late September. The hosts tested negative several times after the incident despite their original positive PCR test. Host Sunny Hostin was angered because her surgeon husband had to be pulled out of the OR because of her false positive and the incident required her medical information to be revealed without her authorization. The show had previously honored Wendy Livingston, RN with an extensive on-air tribute as a healthcare hero.

A Seattle man is indicted for impersonating a nurse for 10 years by stealing the identity of a former college classmate. He had been discovered and fired several times but kept finding new nurse jobs, most recently as a care home’s director of nursing. 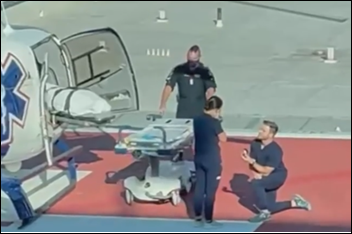 A hospital ED nurse wheels a stretcher to the helicopter ambulance only to see that the occupant is her boyfriend – who is also an ED nurse at the same hospital – who dropped to his knee to ask her to marry him. She said yes.