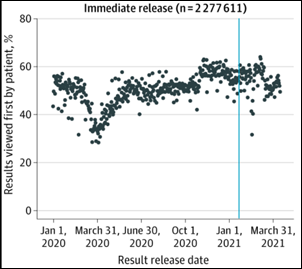 Vanderbilt University Medical Center finds that immediately releasing lab results to the patient portal, as required by the Cures Act, was associated with a doubling of the number of patient-to-clinician messages that were sent immediately afterward.

The percentage of patients that saw their results before their provider had reviewed them jumped from 10% to 40%.

The report didn’t investigate whether patient questions about their results drove the increased messaging.

VUMC delayed release of results to patients based on test sensitivity and complexity until January 2021, which it met Cures Act requirements.

The authors question whether the unintended consequences of immediately sending results to patients, such as patient wellbeing and clinician workload, outweigh the benefits.

From Dolla Bill: “Re: executive compensation. Obscene and pointless – you can only spend so much.” Business ambition is another ultimately pointless diversion in the continuum of birth to death since we all know that hearses don’t pull U-Hauls. We all strive in our own ways to earn “gone, but not forgotten” status even though the legacy we create – other than our children – usually fades away after one generation no matter what we leave behind.

From Periodically Panned: “Re: new health IT publications. Seen these? New HDM and something from Modern Healthcare.” Health Data Management has been resurrected as part of a South Carolina non-profit health collaborative, while Modern Healthcare owner Crain Communications has announced a “digital media brand” that rolls up some databases it bought via an acquisition this summer. I didn’t see anything on either website that hasn’t been amply covered elsewhere and most of their content would have been irrelevant to me personally, but it’s the opinion of a potential audience rather than mine that counts.

From HLTH on Wheels: “Re: HLTH21. What have readers said about the conference compared to HIMSS?” I haven’t heard from anyone who attended, but I’m interested as well, especially with regard to sponsors and the exhibit hall since those are what make or break a conference. Most of the social media comments I saw were from folks who focused on socializing or attending celebrity panel discussions for which in-person attendance seems to add little value over virtual viewing. Perhaps academically focused attendees could research the validity of the oft-repeated conference-goer claim that the networking alone makes in-person attendance worth it (they don’t usually add “to my employer, who is paying the cost.”)

From Rx Wrangler: “Re: Walmart and Surescripts. I heard that incorrectly barcoded medications caused medication reconciliation errors this past weekend, similar to incidents from 2014 in which special characters in a drug database caused prescriptions to be listed incorrectly. Have you heard anything?” I haven’t, but reports are welcome.

From Cricket: “Re: high-cost patients. See this Twitter thread from Jay Parkinson, MD, MPH.” I like it. Jay postulates that nearly all VCs are seeking investments that address the 5% of Americans that consume 50% of healthcare costs, but the reality is that improving their situation won’t move the needle much on overall costs because those people in the 5% fall into three groups:

Hackensack Meridian Health becomes one of the first health systems to use Google Workspace and Chrome OS devices (3,000 Chromebooks and Chromeboxes running Citrix) across its clinical and business environment. The health system will also deploy Google Cloud’s AI/ML solutions for screening and disease detection.

AI Visualize sues Nuance and Mach7 Technologies, demanding royalties for what the company says is infringement on its image-sharing technology patents. AI Visualize has a minimal web presence and seems to employ mostly patent attorneys. 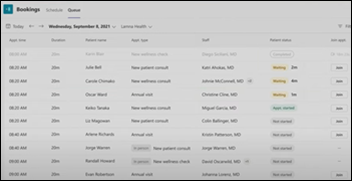 An InterSystems-sponsored study finds that 80% of surveyed health system executives don’t trust the data they use to make decisions. Half of the respondents say that lack of data integration and interoperability is the biggest barrier to achieving their strategic data analytics priorities.

The Vaccine Credential Initiative and The Commons Project will hold a webinar next week on using SMART Health Cards as a digital vaccination certificate that includes well-known speakers such as Andy Slavitt, John Halamka, Micky Tripathi, and Aneesh Chopra,

A federal court rules that the insurer for HIMSS20 has to cover the organization’s settlement with exhibitors of the cancelled conference. 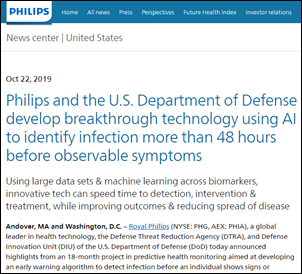 The Department of Defense’s program to use smart watches and rings to predict COVID-19 infections ends, with its former program manager blaming DoD’s sluggish innovation processes. A team that included Philips Healthcare ported a previously developed algorithm that mined EHR data to predict illness to commercially available wearables as a “check engine light” indication that something unusual is happening. The program manager says the big problem was that DoD needs to categorize projects to determine which regulations apply (is it a weapon, a platform, or a system?) and it could not decide if the tool was a medical device.