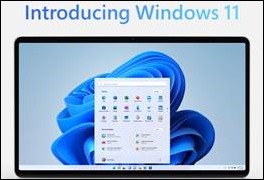 There has been lots of chatter with my IT friends around the Windows 11 rollout. Most of the large organizations I’ve worked with over the years would rather risk letting their operating systems become so dated that they’re almost not supported rather than consider being on the cutting edge of a new release. I worked with several people who I thought would need to have Windows XP pried out of their cold dead hands, but somehow everyone survived their upgrades. From a consumer standpoint, several of my physician friends have run the “compatibility check” from Windows and are concerned that they may not be able to support the new release, but it’s usually due to requirements that they can meet but that aren’t enabled.

Apple is preparing to move AirPods into the medical device space. Temperature and posture sensors are on the horizon, as well as the ability to use them to augment hearing. Using them to check temperature in the ear isn’t a tremendous leap, but I’m less convinced about the posture sensor’s proposed slouch-detecting capabilities. AirPods Pro already have the “conversation boost” functionality, but it’s not clear whether they’re going to expand on this or offer something else for hearing loss. Having been part of plenty of dinner table conversations where dead hearing aid batteries have been a factor, I’m not sure how that’s going to play for Apple either.

As technology becomes smaller and has the potential to bring new diagnostic modalities to the bedside, it becomes more important to evaluate whether they’re really better than the status quo. There are some big discussions going on regarding whether robotic-assisted surgeries really deliver better outcomes than non-assisted procedures, and I’ve seen some pretty heated debates on the matter in the physician lounge. I enjoyed reading this article in JAMA Internal Medicine regarding so-called point-of-care ultrasound (POCUS). The headline sums it up: “Visually Satisfying Medicine or Evidence-Based Medicine?” Over the last several years, primary care journals have had plenty of editorials and discussions about the technology. It’s pretty slick, whether you’re using a dedicated device or something that hooks into your phone. But it requires training to interpret the images and seems to be best used by people who have the opportunity to use it frequently, rather than by individuals who might use it sporadically. The authors note that although “it has become the standard of care for most common bedside procedures” that “its use for diagnostic purposes is not as firmly grounded in evidence demonstrating net benefit on patient outcomes.”

They point out some key challenges for POCUS – that its use is somewhat informal and that images may not be accessible for later review. There is also a lack of clinical trials that have looked at key clinical outcomes such as length of stay or complications from a missed diagnosis. The variability between users is also a concern. They authors call for additional studies as well as the ability to capture images for later review. This may be a field where artificial intelligence might come into play to help with those retrospective reviews, flagging studies with concerning findings for immediate review as well as creating a quality assurance model for overall use. I always enjoy a scholarly article that has a little flair, and the description of POCUS use as “viscerally satisfying” is on track both for accuracy and in making my inner reader smile.

I had virtual drinks with a friend who works in the accountable care organization space and asked her what she thought about this piece regarding the transition to eCQM reporting. She agreed that the process is painful and shared some of her own experiences with the process. CMS is apparently listening and has pushed back the timeline for the transition, but it sounds like some of the EHR vendors might not be as on top of things as they need to be for ACO leaders to feel comfortable. It’s important to remember that ACOs might be dealing with data from dozens of disparate EHR platforms and making sure that the measure specifications are consistent is a significant challenge.

The article calls out a key challenge of electronic quality reporting, that users have to enter the data in the fields where the reports are looking for the reports to work. If there is a lot of dictation or speech recognition documentation being performed at the expense of discrete data entry, numbers aren’t going to look very good. Early in my consulting career, I worked with a number of health systems on their Meaningful Use efforts and it’s more difficult to change end user behavior than you might expect. My more successful clients baked discrete data entry into their physician compensation programs, which as you might expect led to a rapid transition.

JD Power released the results of its 2021 US Telehealth Satisfaction Study. Of the 4,600 patients surveyed, Teladoc was ranked number one for the time period from June 2020 to July 2021. The survey ranked providers based on customer satisfaction, consultation, enrollment, and billing / payment categories. Some interesting tidbits: although telehealth usage was consistent across generations, the highest use was among Generation Y (born 1977 to 1994) and the “Pre-Boomers” born before 1946. Top reasons for use include convenience, timeliness of care, and safety. Top concerns noted include difficulty accessing care and inconsistent service, which given the pandemic and its impact, I’m not surprised. Rounding out the top five, in order: Teladoc, MDLive, MyTelemedicine, Doctor on Demand, and LiveHealth.

Researchers at Stanford and UNC are looking at a wearable medical device that can deliver vaccines. The hope is that it will make it easier to distribute vaccines in underserved areas, but I’m sure there are plenty of people that will still see it as a product of a vast conspiracy. The 3D-printed vaccine patch works without the traditional injection and is said to also work more effectively than current delivery techniques. Using microneedles, the vaccine is delivered intradermally (into skin) rather than into muscle, creating a significant immune response. Part of the magic is that the 3D printing method allows creation of microneedles of controlled geometries which are difficult to manufacture via other means, which leads to greater retention of the vaccine within the skin. I’m a huge fan of prevention, so I can’t wait to see what they come up with next.

Fall is here in my world, with daily temperatures swinging 50 degrees during the course of a 24-hour period. I’m heading south for a little bit of sunshine before I have to deal with freezing temperatures and the potential of increasing COVID-19 transmission as people move their activities indoors. It will be good to get a little break because my latest project has me spinning in circles, but in a good way.

What are you doing to prepare for fall and ultimately winter? Leave a comment or email me.