With all of this money being poured into startups by VCs and PE and everyone promising a better widget to do X, how would patients (or consumers of health care) respond if they were to be asked this (Reagan) question – “Are you better off today than you were four years ago?” Is care more accessible? Valuable? Equitable? Cheaper? Safer? (Ghost of Andromeda)

I do worry about the monetization of the healthcare and the drive for young practitioners to get the best specialty. Some, I am sure are just drawn to that specialty, others are drawn to the compensation. The monetization goes up and down the stack, from VCs purchasing rural hospitals so they can overcharge for labs, to purchasers of EHRs so they can overcharge the clinics, to hospital administrators who have forgotten that a hospital is for patient care, not for generating an insurance bill or funding a collections company. (J Brody Brodock)

From a medical output standpoint, the most productive primary care practices probably have less than five providers. Technology provides little to no benefit. Practices get larger so that they can negotiate with insurance. The dynamics are different for single and multi speciality and hospital owned of course. We shouldn’t raise the compensation for primary care. We shouldn’t raise the compensation for anyone in medicine. We should lower barriers so that there is more competition. (IANAL)

One of the truisms I was told a long time ago by family medicine founding fathers is that primary care has always failed to compete adequately in the American way of doing things. Our commitment to patient care — our mensch-like attitudes to do good on local scales one case at a time, coupled with our lower incomes has kept primary care physicians from putting the same amount of money and time resources into changing the system as our specialist colleagues. That has only been exacerbated by the lobbying dollars of the pharmaceutical and insurance firms along with the large organized health care industry in general to take advantage of primary care physicians as malleable, low-cost solutions. Bluntly put, while we are doing our quarterly CME questions for our 2.5 points, thereby allowing our leaders to justify their latest layer of obfuscation without real change, we could have been communicating and networking with others. (Kevin Hepler)

If we are being completely honest, it’s about, how do we make the field of medicine more attractive to clinicians? And all of that adds up to going back in time. Society has already chosen, and mostly, society doesn’t care. (Brian Too)

Bold of Ascension to so immediately follow Baylor Scott & White, without even waiting to pick up some lessons learned. The latter has, at the most generous, an extremely bumpy year ahead as it tries to recover from its continuing hemorrhage of experienced Epic employees (retained and outsourced alike) and astonishing lack of due diligence (as admitted by its leadership). I suppose if more organizations outsource, analysts will be more persuadable that this is the way of the future instead of temporary insanity and attempt to stick it out. Can’t we just have nice things? (formerly BSW) 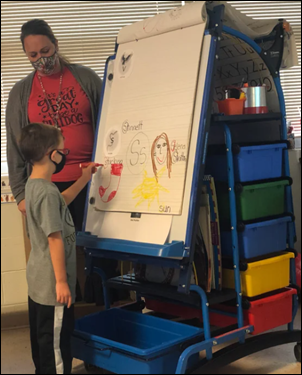 Readers funded the Donors Choose teacher grant request of Ms. M in Kentucky, who asked for an inspiration board for her kindergarten class. She reports, “Thank you for your generous donation to this project. Our Royal Imagination Station is so helpful for easy access and viewing from anywhere in our classroom. It is so handy to move the board throughout our classroom, so that every learner can easily see the display. My learners use it daily for creating anchor charts, practicing letter writing, phonemic awareness for letters and sounds, and reviewing previous learning materials (as a reference tool). We will enjoy this useful tool for many years to come.“

Dartmouth’s medical school apologizes and drops its threats of expulsion against 17 students who it had claimed cheated on an online exam by looking up answers. The university secretly monitored the use of its learning management system by test-takers by reviewing its activity log after the fact, but the Canvas tool was not designed for that purpose and a New York Times review found that the software’s automated background activity can mimic user interaction. 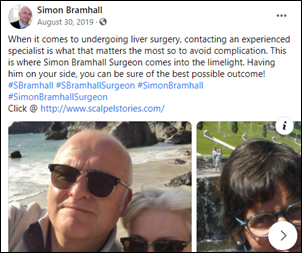 In the UK, a liver surgeon who was suspended in 2017 for using a surgical laser to burn his autograph into patient organs is allowed to practice again. 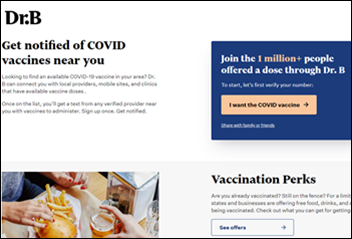 MIT Technology Review takes a look at the vaccine waitlist site Dr. B, which collected 2.5 million signups from people who hoped to be matched to leftover vaccine doses. The site, which was founded by Zocdoc founder and former CEO Cyrus Massoumi, refuses to say whether anyone actually found vaccine after signing up and how their data will be used or sold (the site is not a covered entity, so users enjoy no HIPAA protections). The site had agreements with just two vaccination sites in the entire US when it went on a PR blitz in March, but accepted signups nationally. Meanwhile, Dr. B has at least 56 employees, many of which have a background in politics, and it has acquired similar services. Massoumi unsuccessfully sued Zocdoc last year claiming that he was ousted by his conspiring co-founders in 2015. UPDATE: the company provided this response:

Dr. B was launched at the height of the COVID crisis to get vaccines into as many arms as possible and we have saved lives through this effort. While we have already sent more than 1.1 million notifications to users about available vaccines, we don’t track when shots have been received. User privacy is our top priority and Dr. B never rents or sells user data. At any time, users can also ask to stop receiving notifications and also completely purge their data from Dr. B.

The New York Post says that insurer Clover Health has become a “meme stock” whose share price swings wildly based on the whims of Reddit “WallStreetBets” traders, also noting that the company’s two co-founders – who became billionaires when Clover Health went public via a SPAC — bought three non-profit New Jersey hospitals and converted them to for-profit CarePoint, with one of them earning the distinction as the most expensive hospital in America. The hospitals, which dropped insurance contracts so they could bill ED visits at out-of-network rates, charged one teacher $9,000 to apply a bandage to her cut that required no stitches. Day-trading Redditers got interested in Clover Health shares when a short-selling analyst claimed that the company is inflating sales. 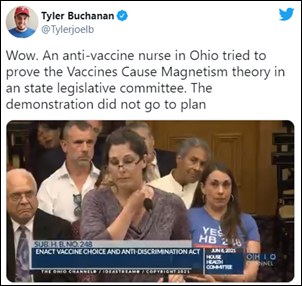 An anti-vaccine doctor and nurse who were brought to an Ohio health committee meeting as expert witnesses who oppose business or the government requiring COVID-19 vaccination argue that not only have COVID-19 shots killed 5,000 people, they also magnetize recipients. The nurse dramatically proclaimed to state legislators, “Explain to me why the key sticks to me,” sticking with her script even as the key failed repeatedly to stick to her neck. Both healthcare professionals cited as their information source “pictures all over the Internet.” 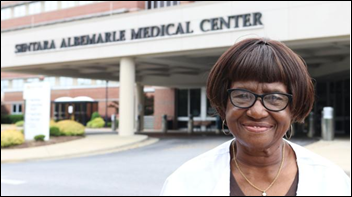 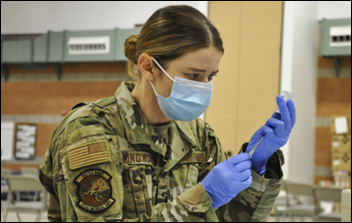 A military publication profiles 30-year-old Nevada Air Guard 1st Lt. Caleena Longworth, MD, whose youthful appearance and spring graduation from medical school earned her the nickname “Baby Doc.” She completed medical school in working around her COVID-19 deployment, where she was involved with testing and vaccination.