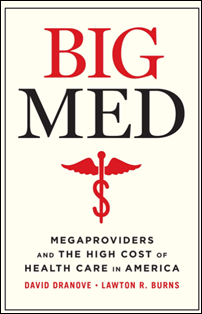 Authors David Dranove (Northwestern University strategy professor, PhD in economics, healthcare system antitrust expert) and Lawton R. Burns (Penn health care management professor, PhD in sociology, long-time analyst of physician-hospital integration) aren’t very cheery about the prospects of our profit-driven US healthcare system in their just-published “Big Med.” They repeatedly use the term“ depressing” to describe the mess we’re in. While they offer few optimistic solutions, they provide a valuable service in at least explaining how we got here.

Health system consolidation has resulted in poorly run, bigger organizations whose incentive is to maximize profit and business size rather than manage cost or improve health. Despite health system claims that their mega-mergers will result in efficiency, scale, and lower costs, that never actually happens. The only predictable result of such M&A activity is that newly enlarged health systems use their market clout to raise prices, to the point that they drive half to two-thirds of US healthcare spending. Yet only 5% of consumers blame hospitals and doctors for an expensive, broken health system, and nobody even notices that the revenue and executive compensation of big health systems exceed that of some major global brands

The magnitude of the problem keeps growing, but the problem itself goes back to the beginnings of health insurance. A government report from 1928 concluded that wasteful spending made healthcare inaccessible to most Americans. It called for universal health insurance, provider integration, payment reform, and a focus on prevention. The American Medical Association was a loud critic of all forms of health insurance, eventually including Medicare and Medicaid (they lumped all forms of health insurance together as being Communist), but they liked the idea of the prepaid hospital insurance plan that Baylor Hospital created in 1929 that eventually spread into a national Blue Cross umbrella. Insurance company board members were mostly hospital executives who made sure that the plans supported blank check spending – the insurer couldn’t question the amounts billed, hospitals were not forced to compete on price or quality, and the insurance plans did not require patient cost-sharing that would give them incentive to shop around or audit their own bills. Doctors kept their autonomy without hospital oversight and were immune from having their decisions questioned.

The rollout of Medicare and Medicaid dramatically increased the percentage of insured Americans, which then drove jumps in hospital bed count, physician numbers (many of them high-earning specialists), and overall healthcare spending. Hospitals started affiliating with medical schools to create academic medical centers. The jump in healthcare spending strained federal and state budgets, leading to these unsuccessful cost containment efforts:

Hospitals faced multiple threats in the 1990s – reduced federal payments, ASC competition, and the proposed Clinton health plan that called for massive restructuring in payment and delivery. Urged on by consultants and trade magazines, they pursued vertical integration, in which everyone wanted to be Kaiser Permanente in owning physician practices and health plans and working with private equity-backed practice management firms. Models that were developed in California and Minnesota were copied even though PCPs were the only providers who were heavily capitated. The result was that health systems:

The larger, more complex organizations favored executives whose approach was pure business rather than hospital administration. They focused on economies of scale, centralized management, systems building, and group purchasing. Health systems developed complex corporate structures and holding companies, some of them unrelated to healthcare, and moved to product line management in which unprofitable services were eliminated regardless of local need. Doctors were held accountable to economic credentialing.

Health systems competed to buy physician practices, paying $1 million or more upfront to acquire a PCP practice that was netting $150,000 while guaranteeing the income, hours, and freedom from oversight of the selling doctors. They ended up with the same doctors making the same number of referrals, except that they had spent fortunes buying their practices and watching physician productivity drop. Physician-hospital organizations mostly lost money as they generated no managed care contracts, much less risk-based contracts. IDNs allowed nearly all medical staff into their PHOs instead of choosing more cost-effective ones or trying to change practice patterns. Specialists who didn’t want to risk their high incomes beat the system by threatening to take their business to other health systems.

Physicians, meanwhile, formed their own integrated delivery networks, hoping to let someone else deal with EHRs and billing. They signed up with now-defunct but then high-flying national physician practice management firms such as PhyCor and MedPartners.

The end result of IDNs was no change in cost or quality, lots of money spent chasing scale, the emergence of highly paid health system executives who listened too closely to consultants, slow decision-making, and loss of connection with frontline staff and physicians.

Lack of EHR capability doomed integration in the 1990s. Health systems used EHRs to control the “physician’s pen” and turn those systems into billing machines, but patient documentation diverged from clinical reality in being cranked out solely to increase billing. Extracting clinical information was hard because most of it was in non-discrete form.

Hospital acquisition of practices picked up again due to hospital-friendly billing policies in which CMS, which allowed them to bill more for the same physician performing the same work in the same office. Cardiology and radiology practices were attractive targets.

The authors list a few solutions that haven been touted to help contain healthcare costs along with why they don’t think they will work.

The authors make these recommendations:

The takeaway of the book is that non-profit megaproviders are the biggest driver of healthcare costs and are using their local and regional goodwill to get away with competition-impeding mergers, indefensible pricing, and lack of operational and financial transparency. Market forces, technology, and consumerism won’t create price-lowering and quality-increasing competition as they have in other industries. The ever-increasing number of physicians who are employed by big health systems has blunted the potential physician pushback on the status quo, employer pressure has been mostly a bust, and consumers are still left being automatically enrolled in an “only in America” reverse lottery in which contracting a major illness is likely to leave them bankrupt while everybody else continues in the status quo happy that it didn’t happen to them.

Thanks to the HIStalk reader who asked me to review this book and to University of Chicago Press for providing an electronic copy.