Another government response to the proposed interoperability rule that doesn’t actually address any of the privacy concerns that the letter / follow-up post contained. If he’s going to talk about walking the walk, then they need to be seriously pushing for HIPAA to be expanded in a way that accommodates the environment they’re trying to create.(Ex-Epic Chiming In)

This isn’t the first time it’s been reported that Cerner did that pricing. Same thing happened at University of Illinois Chicago. They had such an old / customized version of Cerner that it was reported that the cost to basically rebuild Cerner and modernize it was the same cost or close to it as moving to Epic. Keep in mind that Cerner’s revenue on actual licenses for Millennium is minimal at best (check the earnings report). Their largest cash cow is their consulting organization. (Associate CIO)

Nurses were “rescheduling” the patient’s meds on the Medical Record to an hour later to avoid those [late med reason question] popups. This disguised the problem of how often medications were actually being given late. Sometimes it takes empathy and seeing the problem with your own eyes before we can really make things better. More data collection does not always make a better metric and can sometimes miss the mark. (Robert Buehrig)

Those metrics look decent for ambulatory usage. You really only want EHR vendors to expose these metrics rather than try to operationalize them because you don’t want the EHR vendor to decide how much of your time you should spend writing notes. That means that it’s going to be up to your management to respond to those metrics. (What)

I do worry that the metric of “undivided attention” suggests that ANY attention the doctor pays to the information about the patient in the record is considered to be not in the patient’s best interest. One could imagine taking that to an unproductive extreme. I suspect that most patients these days are counting on the doctor’s taking the time to become informed about their care. When I go to my internist, I am counting on his putting it all together and coming up with a plan. He can’t do that without breaking eye contact with me, and I am OK with that. (Andy Spooner) 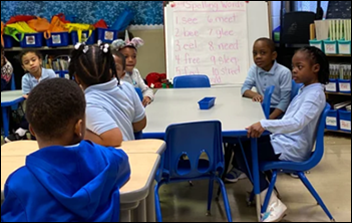 Readers funded the Donors Choose teacher grant request of Ms. H in Pennsylvania, who asked for a new table for her elementary school class. She reports, “Thank you so much for our new table! This year we are lucky to have 22 students in our class, but were we pretty cramped at the old furniture that we have. Little by little I have tried to trade out our furniture for newer and more spacious materials. Thank you for being part of our growth!”

An Illinois pediatrician who committed suicide last fall left a note that suggested he regretted falsifying medical records over a 10-year period for parents who didn’t want their children vaccinated. Van Koinis, DO practiced holistic medicine and was sought out by parents who needed falsified vaccination records to allow their children to attend school. The sheriff warns that the ambiguity of the doctor’s note may also mean that he didn’t give vaccines even when the parents assumed that he did.

Corpus Christi, TX police arrest a hospital’s on-duty ED doctor for public intoxication after witnesses reported that he was belligerent and walking around the ED’s public area wearing only underwear. 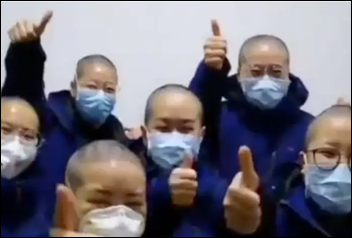 Overworked clinicians in Wuhan, China are shaving their heads to make it easier to don makeshift hazmat suits and are using adult diapers to save bathroom break time. China has only two doctors per 10,000 people and many of them do not have degrees. Hospitals are running out of medical supplies, protective suits and masks, and food. Some doctors have been assaulted by people who were upset about wait times, while others reported that the hospital’s entire supply of N95 protective masks had been seized by hospital executives for their own use.

CDC mistakenly tells a San Diego hospital that several of its patients had tested negative for Covid-19 even though the samples of three of them had not yet been processed, allowing them to be returned to military base quarantine. One of the patients was later found to be infected. CDC blames an unspecified labeling error that may have been caused by the hospital’s assignment of phony patient names to protect privacy.

Kenya has spent $625 million since 2015 to lease diagnostic medical equipment from companies like Philips and GE, but more than one-third of the machines are sitting idle in hospitals that don’t have radiologists to operate them. Critics say the government should have spent the money on clinics and midwives, speculating that diverting the money into procurement contracts gave health officials a chance to line their pockets. Hospitals say they weren’t asked about their needs and in some cases received unneeded duplicate machines. The health ministry refused the auditor general’s request to review the contracts.