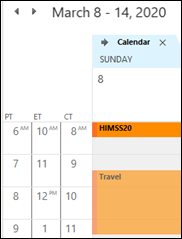 My HIMSS schedule planning is being hampered by some kind of bug in Outlook, where the time zones aren’t displaying correctly for HIMSS week. They are accurate the weeks before and after, but the week of the 8th is a mess. I suspect it has to do with the time change to DST, but it’s weird. I’ve asked a couple of other Outlook users and they’re not having the issue, which leaves me doing all kinds of shenanigans with my calendar to make sure I know when and where I need to be. If you have any tips on this, or are seeing it yourself, let me know. I doubt too many people run three time zones on their calendars, so it may be a fairly limited problem.

Signing up for events at HIMSS is becoming more complicated. Gone are the days when you could just attend vendor events as a mere HIMSS attendee. Citrix is requiring people to be “qualified” to attend and will get back to me in 48 hours to let me know if I’m on the list. Others such as Capital One / Ziegler are a little more accessible. One of the things I loved about HIStalkapalooza was that everyone was invited – there was a great mix of people which led to lots of interesting conversations. I respond to invitations with my real name and credentials, so I’m getting a feel for how the average attendee is handled.

I worked some unscheduled clinical time this week in order to cover a colleague with influenza. I was surprised that the EHR had been upgraded with no notification or explanation. Although the changes were minor, it created an unsettled feeling as you wondered what was different that you might be missing. Although some of the enhancements were nice, a few missed the mark in that they were only partial fixes to issues. Our vendor is going through some growing pains and I’ve heard good things are coming, so I’ll remain optimistic.

The lack of notification may be part of an overall change in communication patterns for the practice, and not necessarily for the better. I’d love for them to hire me to put on my standard “Effective Communication Strategies” workshop because they’re not doing a great job. In order to prevent people’s email from being inundated, they’ve gone from a “push” communication strategy to a “pull” one, and unfortunately, it’s not working.

When I do my workshop as a consultant, I walk organizations through the creation of a communications matrix, where they define the different kinds of communications, the audience, and how they should best be delivered. For some critical communications, such as how to handle the novel coronavirus (now named COVID-19 by the World Health Organization), you might want to communicate in multiple channels and blast the important items to people via text or email.

Instead, our practice leadership sent an email that essentially said, “So that we don’t send you emails that would quickly become outdated, we’ve put everything on a website that you should check daily.” Unfortunately, the website doesn’t have a clear section that spells out “what’s new,” which means providers have to read through the whole thing and try to figure out what has changed since the last update. It’s not a terribly effective way to communicate key information in a rapidly evolving situation. I can pretty safely predict that people will just stop looking at it, much like they stopped looking at a quality improvement website that worked in the same way.

Several of my clients have reached out for advice on how to handle various aspects of the COVID-19 situation. If you’re not already freaked out about being exposed to germs because you’re part of the healthcare IT infrastructure, you might be when you hear the latest data. According to the Journal of Hospital Infection, coronaviruses can survive on surfaces for up to nine days, although the majority die after four or five days. Low temperatures and high humidity increase the lifespan. I wonder if vendors whose products include solutions for disinfection and sanitation will see an uptick in foot traffic at HIMSS. 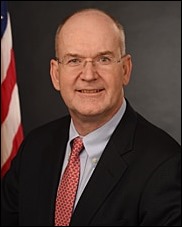 I was glad to see that National Coordinator for Health Information Technology Don Rucker called out the hospitals that signed Epic’s anti-interoperability rule letter. He notes that only three in 100 academic medical centers signed it. He went further to criticize one of the signers, saying, “One of the signers of the letter is known for taking thousands of patients to court. If you take someone to court, that information becomes public discovery. Their medical care is now public. It’s part of the court record… Looking at protecting privacy, we need to walk the walk here as we look at who is saying what and letter-writing campaigns.” It’s always good to look below the surface – sometimes what you find is pretty interesting.

In other news from ONC, the Health IT Advisory Committee (HITAC) is launching a new task force, the Intersection of Administrative and Clinical Data Task Force. It will focus on connecting data standards to improve interoperability, reducing clinician burden, and improving efficiency. Additional information on task forces is available on the HITAC website.

A recent article noted that little news has come out of Amazon, Berkshire Hathaway, and JPMorgan Chase’s Haven since its founding. It last issued a public statement in March 2019. We’ll have to see if there’s any buzz around or after HIMSS. If anyone has anything to share, feel free to reach out and we’ll keep you anonymous. 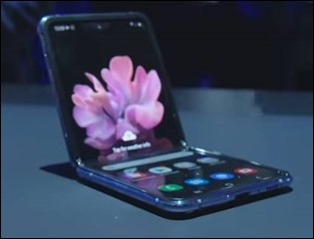 If you’re still doing your Valentine’s Day shopping, there’s always the Samsung Galaxy X Flip phone, which launches on February 14 in the US. It’s got a slick one-inch OLED display on the cover that shows notifications when the phone is closed, and when the phone is open, you can use it as a full-screen or split-screen display for different apps. The screen is rated for 200,000 folds, which based on the phone habits of some teens I’ve seen lately, might last a year. Is $1,380 too much to pay for someone’s undying love and affection?