We are in the strangest time in my career, with so many mergers and acquisitions by competitors and VC firms. I started as a consultant on Millbrook/Paradigm PM and MedicaLogic/Logician EMR which became the initial GE Centricity suite, on two separate platforms smushed together. Now that product line has been acquired again. I also work with another full PM/EMR that was just acquired by a competitor who is owned by a VC. The mission of a VC is different than the traditional EMR vendor, so we’ll see how it shakes out. In the more than a decade GE had Centricity, changes were made for mandatory programs, but there was never any real product development after the acquisition. That’s always the fear, your EMR will be acquired at some point, by whom and why will dictate if the product continues to be developed or not. Everyone is for sale for the right price at the right time. (PM Consultant)

While non-competes are largely not legally enforceable – they are enforceable in operational practice. Epic practices this, or at least used to, by restricting UserWeb access, access to resources, or just general threats to the consulting firms that work with them. In this David vs Goliath fight of worker rights and hiring freedom, Epic is a Goliath that doesn’t look like it’s found a worthy David to keep it in check. It continues to not only hurt and frustrate their own employees, clients, and partners, but it also hurts local businesses in the Madison area. These local groups constantly deal with the Ex-Epic people starting jobs to only leave after a year to chase the consulting money increasing their turnover and decreasing their ability to hire reliable staff and hurting trust in hiring anything from Epic. (Epically Annoyed)

In the case of Epic, you’re now limited not only by your own non-compete, but the separate agreements that Epic has made with the various consulting firms. For instance, I left Epic in 2018 with a 1 year non-compete. When my year was almost up, I started reaching out to various hospitals and consulting firms. I heard back from several of the bigger consulting firms saying that they couldn’t even begin conversations about employment until I had been away from Epic for 1.5 years.

Due to these newer agreements between Epic and the consulting firms, I essentially had an additional non-compete that extended beyond the one I signed when I was hired. Furthermore, preventing employment conversations to even start until the wait period ends just adds extra time beyond the non-compete that you will most likely remain unemployed since you can’t get a jump start on the process. (Ex-Epic Chiming In)

If Cerner received top marks for IT hospital support, then I cannot imagine how bad it really is out there. Cerner IT support is about as helpful as the worse DMV experience you can imagine. I am a front line MD, and if they are the benchmark, then we need a whole new paradigm. EHRs are an abomination and the support of them is equally terrible. CMS and Congress did patients and MDs a HUGE disservice by enabling this artificial market for Cert EHR and its resultant disaster we all live in today. It has set back REAL innovation in EHR/HealthIT at least a decade, maybe 20 years. I’m not sure how many more articles, research, studies, etc we need to show that the current crop of EHRs are almost criminal in terms of safety, security, outcomes, burden to MDs nursing, and the ridiculous buzzword care (MACRA, ACO, Value based care) are complete and utter nonsense and HORRIBLY expensive and causing devastating damage to the practice of medicine. When will we learn that Washington DC’s policy wonk, non practicing CMS staff have NO idea how to practice medicine safely, securely, and with the help of customized technology. We do NOT need more program changes unless they are…hey…we only make a mess of things…we are getting out of the way of physicians and IT and let them actually work together instead of the data click driven nightmares they continue to pile on to us. Its time to just say no to all of this. Stop trying to fix the unfixable. When will we learn that when government runs healthcare it turns into the VA and postal service combined. (meltoots) 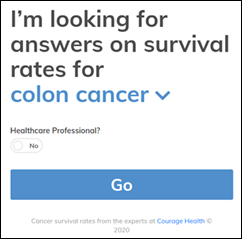 GoodRx co-founder Stephen Buck (who also happens to be co-founder of a wine tour and experience company) turns his attention to cancer survival rates with the launch of CancerSurvivalRates.com. Using public data from the National Cancer Institute, the site offers survival rates of up to five years based on a cancer patient’s stage, grade, time since diagnosis, and histology. Buck, who bootstrapped the project with co-founder Omar Mehmood, would like to eventually sell the site to Google: “It would be ideal to maintain as a free public resource that comes up when someone searches on Google.” 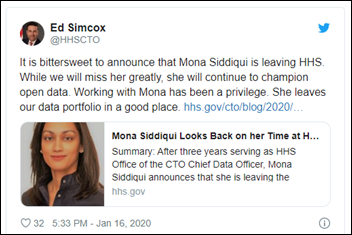 Mona Siddiqui, MD announces she will step down from her position as chief data officer within HHS. HHS CIO Jose Arrieta, who has also claimed the role of CDO under the ambiguously structured Foundations for Evidence-Based Policymaking Act, says he will hire the agency’s “first” CDO. Politico reports that she will become a VP at Humana. 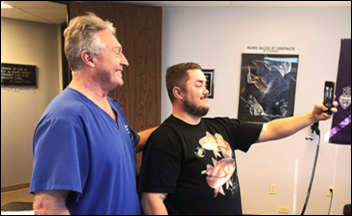 Chiropractor Gregory Johnson, DC credits his practice’s surge in popularity to Youtube, where he has gained an online following of “crack addicts” who have traveled far and wide to take advantage of his signature spine realignment known as the “Ring Dinger.” Johnson earns around $20,000 each month for the 10-minute videos he makes with his cell phone’s camera and a selfie stick. 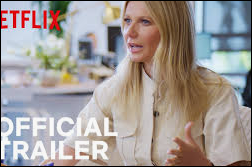 Goop just keeps going: Netflix will release “The Goop Lab” next week. Billed as a “docu-series,” the six episodes are, according to one critic, a thinly veiled infomercial for Gwyneth Paltrow’s pseudo-scientific lifestyle brand. 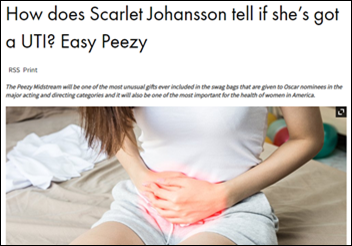 Just what every Oscar winner wants: Academy Awards swag bags will offer urine sample collection devices and genetic testing kits to select nominees. No word yet on whether or not Goop will include one of its wacky products.