It seems like Cerner is going for the data play for their growth. That’s what Allscripts told Wall Street for the past five years and they never were able to execute on it. The solution in that space is not really a technology as much as it is a social process. Maybe they can pull it off. On a different note, CPSI seems to be more in the outsourced to Overseas billing business than in the EHR business these days. (IANAL)

This seems to me to be part of an ongoing problem space that really shouldn’t be part of a free market society. We have seen many examples of VCs buying facilities and clinics then turning them into profit centers. Be that through purchase of rural hospitals and using the lab systems to “outsource” labs at many multiples of the normal cost, or hospitals aggressively pursuing clinical debt up to and including leans on homes and garnishment. The stories are numerous and from credible sources (KHN, NPR, DOJ). Frankly, we shouldn’t allow venture capitalists into our health systems — their mission is to turn a profit and they use the opaqueness of the HC system to do that. A $46,000 rabies shot that normally costs $3,000? (AnInteropGuy) 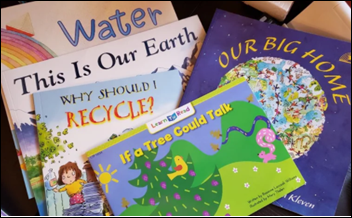 Readers funded the Donors Choose teacher grant request of Ms. P in Pennsylvania, who asked for three sets of books covering math, space, and the environment for her elementary school class. She reports, “These books have made a big difference in our classroom. Since I am teaching virtually, I have recorded myself reading the books to the children. This way they can go back and listen whenever they wish. There are definite favorites. I don’t blame the children, I have my picks too. When we return back to in-person classes, these books will have a special home. They will have there own special shelves for easy access for the children. I can see them being read for years to come.” 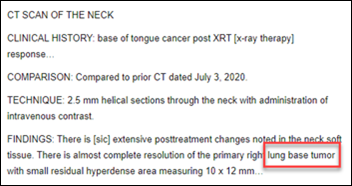 A patient in Canada who is undergoing treatment for throat cancer panics when new CT scan results that he saw on MyChart referred twice to his lung cancer. He couldn’t reach his oncologist, but the hospital connected him with the radiologist, who apologized that the transcription system had misheard his dictated “tongue” and instead documented “lung.” The patient says of his stressful reaction, “It confirmed my impression that the healthcare system has yet to establish an effective way for caregivers and patients to communicate except through in-person, video, or telephonic visits. I’ve not been successful in getting questions answered using the Cancer Centre’s Patient Support Line. And so far, MyChart has mostly wasted my time or misled me … I’m struck that when I read my CT report, I saw immediately that the reference to ‘lung’ was anomalous. If a layperson can see an anomaly, could we train an AI to catch one? Don’t dismiss the thought. I certainly don’t want a robot that autocorrects CT reports. But I do want one that can register surprise when something unexpected happens.” 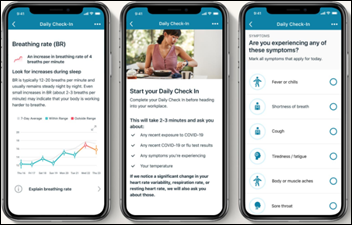 NASA will offer 1,000 employees, including astronauts, a Fitbit Charge 4 device and Fitbit’s Ready for Work app to help them decide whether they are experiencing COVID-19 symptoms and should stay home from work during the critical pre-flight period. The app tracks resting heart rate, heart rate variability, and respiratory rate and allows users to self-report symptoms, temperature, and possible COVID-19 exposure. 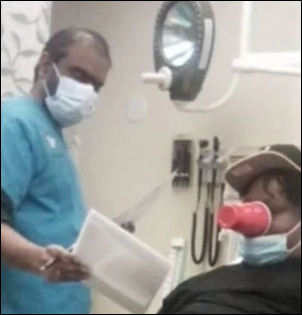 This is American culture and its healthcare system in a nutshell. Tessica Brown uses Gorilla Glue spray adhesive as a replacement for hair spray in a pinch, then spends 22 hours in the ED trying to get it removed. The daycare owner was finally freed of her adhesive hair net by a plastic surgeon, but meanwhile earned dozens of millions of TikTok video views, raised $22,000 in a GoFundMe to cover her medical bills for “this unfortunate ordeal,” and is reportedly planning to sue Gorilla Glue for misleading her (she denies reports that she’s suing). Not to be outdone, a fellow Louisiana resident – who previously earned his 15 minutes of fame on Dr. Oz for participating in the “ice cream challenge” of licking the contents of a carton of ice cream and putting it back on the store’s freezer shelf for someone else to buy — attempts to prove that Brown was exaggerating by gluing a Solo cup to his lip, then videoing himself triumphantly licking it off. That didn’t work as planned and he, too, ended up in the ED, where doctors peeled the cup off.

A UK hospital asks midwives to change their childbirth-related terms to be more inclusive – “mother” will be replaced by “birthing parent;” “her” will be retired in favor of “them;” “maternal” will become “maternal and parental;” and the new term for “father” will be “co-parent.” 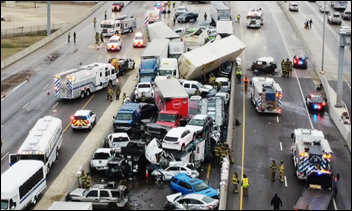 A Texas nurse whose car was pinned between two semi trucks in the early morning 100-car I-35W accident that killed six people crawls out through her trunk to free herself, hops the highway barrier to hitch a ride with a co-worker going the opposite direction, and goes to work. 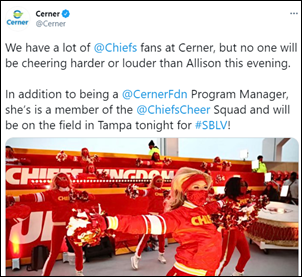 Cerner Charitable Foundation Program Manager Allison Chael worked her other job as a Kansas City Chiefs cheerleader last weekend. Each team had to choose eight members of its cheerleading squad — the Chiefs have 33 cheerleaders on the roster – and they were not allowed on the playing field for this year’s game. 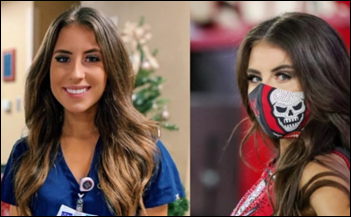 Cheering on the other side of the Super Bowl field was Tampa General Hospital ICU nurse and Buccaneers cheerleader Anastasia Lusnia, RN.