“. . . the importance of having a fast, highly interactive interface cannot be emphasized enough. If a navigation technique is slow, then the cognitive costs can be much greater than just the amount of time lost, because an entire train of thought can become disrupted by the loss of contents of both visual and non-visual working memories." — Colin Ware, Information Visualization: Perception for Design

Paul Fitts was the pioneering human factors engineer whose work in the 1940s and 50s is largely responsible for the aircraft cockpit designs used today. His life’s work was focused on designing tools that support human movement, perception, and cognition.

In 1954, he published a mathematical formula based on his experimental data that does an extremely good job of predicting how long it takes to move a pointer (such as a finger or pencil tip) to a target, depending on the target’s size and its distance from the starting point.

Fitts’ Law has turned out to be remarkably robust, applicable to most tasks that rely on eye-hand coordination to make rapid aimed movements. Although digital computers as we know them did not exist when Fitts published his formula, since then his law has been used to evaluate and compare a wide range of computer input devices as well as competing graphical user interface (GUI) designs. In fact, research based on Fitts’ Law by Stuart Card and colleagues at the Palo Alto Research Center (PARC) in the 1970s was a major factor in Xerox’s decision to develop the mouse as its preferred input device.

As you would expect, Fitts found that it takes longer to move a pointer to a smaller target or a more distant one. The interesting thing is that the relationship is not linear.

Conversely, if a target is already reasonably large or distant, a small increase in its size or small decrease in its distance has much less effect.

What is Fitts’ Law telling us? Why isn’t the relationship linear? Are the two tasks fundamentally the same or are they different, requiring different visual, motor, and cognitive strategies? 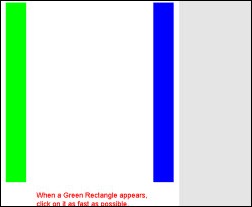 Perhaps the best way to get a feel for this aspect of Fitts’ Law is to try it yourself. If you have two minutes to spare, click on the link below for an online demo. You will see two vertical bars, one blue and one green. The green one is the target. Your goal is to use your cursor to move to and click on the green bar, accurately and rapidly, each time it changes position.

As you go through the demo, imagine that the bars represent navigation tabs or buttons in an EHR program. In other words, imagine that your real goal is to view EHR data displayed on several screens—clicking on the green target is just the means to navigate to those screens.

You will see some text displaying a decreasing count: hits remaining — XX. Keep track of this hit count while moving to and clicking on the green target. This task will have to stand in for the more challenging one of remembering what was on your last EHR screen (see my post on limited working memory).

When you finish, you can ignore the next screen, which displays your mean time, some graphs, and a button to advance to a second version of the demo.

Here’s the link to the online demonstration of Fitts’ Law.

What did you find?

You probably found that if the green target was sufficiently wide and close to the cursor, you could hit it in a single "ballistic" movement. In other words, with a ballistic movement, once your visual system processes your starting position and the target location, other parts of your brain calculate the trajectory and send a single burst of motor signals to your hand and wrist. The movement itself is carried out in a single step without the need for iterative recalibration or subsequent motor signals.

Your brain used the same strategy as the one used for ballistic missiles. The missile is simply aimed and launched, with no in-flight corrective signals from the control center.

Conversely, you probably found that if the green target was narrow and far from the cursor, you couldn’t use a ballistic strategy. After initiating the movement, most likely you had to switch your gaze to the cursor, calibrate its new screen location in relation to the target, calculate a modified trajectory, send an updated set of motor signals to your hand, and so forth in iterative loops, until reaching the target.

These two strategies are fundamentally different. Not only does the ballistic movement take less time, it requires much less cognitive effort. In fact, if the target is large and close enough to your cursor, you can make a ballistic hand movement using your peripheral visual field while keeping your gaze and attention on the screen content.

These differences between ballistic movements and those requiring iterative feedback may explain the non-linear nature of Fitts’ Law.

As I discussed in a previous post, the rapid "saccadic" eye movements we use to redirect our gaze are the benchmark against which all other navigation techniques should be measured. Not surprisingly, these saccadic eye movements, lasting about a tenth of a second, are ballistic. Once the brain has made the decision to redirect gaze, it calculates a trajectory and sends a burst of neural signals causing our eye muscles to turn the eyes to the new target and simultaneously preparing our visual processing system to expect input from that new location.

It makes sense that saccadic eye movements are ballistic. We want to turn our eyes to the new fixation point as quickly and effortlessly as possible. In fact, we take in no visual information whatsoever during the saccade itself. We only acquire visual information between saccades, when our gaze is fixed on an item of interest.

From an evolutionary standpoint, it would appear that saccadic eye movement, being more rapid and efficient than iterative strategies, was selected as our primary means of navigating visual space. If we want our digital input devices and interactive designs to approach the efficiency of saccadic eye movement, we should create user interfaces that facilitate ballistic strategies.

Returning to the vendor’s design presented in my last post, the "maximize" buttons, shown below outlined with red circles, are both tiny and distant:

There is no way we can move the cursor from one maximize button to another (except for the adjacent ones) using a ballistic strategy, whereas the design below, using a separate navigation map, supports such a strategy:

Of course, all design choices require trade-offs. The second design requires a major compromise. By requiring a separate navigation map, it adds another level of complexity to the user interface.

To be clear, the problem is not the extra second or so that it takes to acquire a small, distant target. It’s that poor designs cause the user to break concentration and use working memory for non-medical tasks. An unnecessarily difficult navigation operation can disrupt the train of thought needed to apply good medical judgment to an individual patient.

Quite simply, when designing EHR interfaces, many choices are not a question of preference or aesthetics. We are hard wired so that certain tasks are simply easier than others. Our EHR design choices need to be informed by an understanding of these human factors.