The video showed people completing a symptom questionnaire, paying a fee, and then being given a diagnosis and prescriptions by “third-party healthcare provider groups.”

Amazon Care, a similar service, will cease operations on December 31, 2022.

Attending HLTH next week? Some HIStalk sponsors will be there too, and provided a summary of what they will be doing in Las Vegas and how you can connect with them.

Here’s a Datavant company refresher after I interviewed CMIO Doug Fridsma, MD, PhD about tokenization. Drug development technology vendor Roivant Sciences created the company in 2017, then merged it with healthcare data firm Ciox Health (which was itself a rollup of HealthPort, IOD, Care Communications, and ECS) in 2021 in a $7 billion deal to create a company with $700 million in annual revenue. Roivant has created a dozen drug therapy companies that it calls “vants” (all of them have names ending in “vant,” such as Datavant, Genevant, Psivant, etc.). Riovant Sciences went public in October 2021 in a $7 billion SPAC merger, with shares having since lost 46% of their value versus the Nasdaq’s 27% loss, valuing the company at $3.6 billion.

I ignored several press releases today in which I couldn’t figure out exactly what the company does, what its new product or service involves, or why I (and my readers) should care. Committee-generated writing is usually awful.

Northwell Holdings and Aegis Ventures launch Upliv, which will offer video consults and care for managing the symptoms of menopause. The company, which will get $8.4 million in seed funding through the end of 2023, will market to employers who will offer it as a free employee benefit. 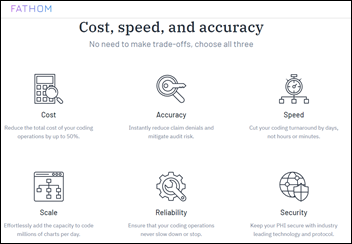 Medical coding automation vendor Fathom raises $46 million in a Series B funding round.

Strategic advisor Seth Joseph says that “Glen Tullman’s best magic trick yet” would be for his Transcarent to buy Teladoc Health, which Glen foisted Livongo in August 2020 for $18.5 billion to create a $37 billion behemoth that quickly turned into a $5 billion mid-player. He says that Transcarent needs Teladoc’s relationships with health systems and its care management capabilities courtesy of Livongo, which would give the employer-focused Transcarent a better chance of selling to employers and taking on risk.

Amazon becomes the first publicly traded company to lose $1 trillion in market value, with Microsoft on its heels with a market capitalization that is down $889 billion.

A large-scale study of the VA’s data warehouse determines that being infected with SARS-CoV-2 more than once carries increased risk of death, hospitalization, and long-term effects. Those people who get through an initial infection can’t let their guard down to reinfection, as each additional infection increases the risk. 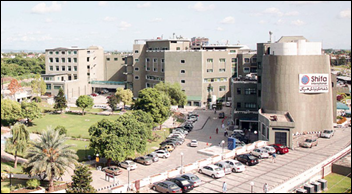 Pakistan’s Shifa International Hospital wins a Cheers Award from the Institute for Safe Medication Practices for its $900 project in which pharmacy services verify chemotherapy preparation using a camera and off-the-shelf software. ISMP notes that not all hospitals can afford sophisticated IV workflow and robotic software.

A KeyCare survey of people who have had at least one telehealth visit like or prefer it as an option, with 79% saying that it is important that both their regular doctor and their telehealth provider have access to their health records.

The waitlist of England’s NHS reaches a record 7.1 million patients even before a planned nursing strike.

Russian ransomware hackers begin posting the exfiltrated data of Australia-based health insurer Medibank on the Dark Web after the company declines to pay their demanded $10 million ransom. The first data posted was a list of patients who have had abortions. The Australian Federal Police warns that people who looks at the data are themselves committing a crime under the country’s privacy laws. Minister for Home Affairs Clare O’Neil called the hackers “scumbags,” adding that as a woman whose private health information was compromised by the hackers, the attack should not have happened and she expects Medibank to fully support its customers.

CommonSpirit Health says that access to its EHR and patient portal has been restored for most users following an October 4 ransomware attack.

Recently filed lawsuits claim that hospitals whose websites and patient portals used Meta Pixel may have violated federal and state wiretapping laws, as the hospitals and Meta intercepted doctor-patient communication without their consent. Legal experts wonder whether Meta’s terms of service will protect it from liability since hospitals accepted responsiblity for configuring the tool.

London-based doctors write in the BMJ that a chronic lack of attention to NHS IT infrastructure and systems “brings to a halt the everyday business of healthcare.” The authors suggest learning from US approaches such as researching burnout and having ONC provide some federal oversight.

Ontario’s government and the Ontario Medical Association agree to decrease physician payments for virtual visits in which no existing patient-physician relationship exists, ending pandemic policies in which doctors were paid the same for virtual or in-person encounters. The most common face-to-face fee code is paid $27 US, while one-off virtual visits will now pay $11 to $15. A pediatrician and virtual care provider says the pay cut devalues services to the point that seeing patients virtually without a referral is no longer viable, ending the trend of expanding access. The Ontario government is targeting a 60-40 ratio of in-person and virtual care for family doctors. 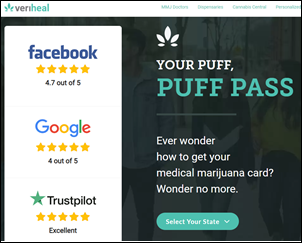 A chronic pain patient files a complaint against a Pennsylvania doctor who was assigned by a national medical marijuana card service to review her request. The woman says she could barely see the doctor during her video visit, their conversation was short, and she couldn’t figure out how to upload her medical records. The state agreed that he approved her card without reviewing her medical records. The doctor contracts for Veriheal, which gives patients their money back if they aren’t approved and reportedly pays doctors only for patients they approve. 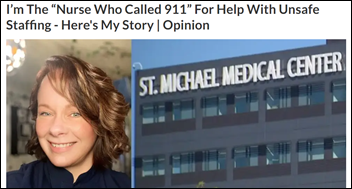 The ED charge nurse who called 911 seeking help with patients due to short staffing says that employees of St. Michael Medical Center (WA) were stressed by ongoing changes in ownership and leadership, a move to a different building, and CommonSpirit Health’s cyberattack that took the hospital’s Epic system down and sent clinicians back to paper charting. She says that the night she called for help, the ED was at less than 50% of minimum staffing and patients with serious issues were being left unattended in the waiting room. Joint Commission issued a preliminary denial of accreditation to hospital after the incident. She concludes:

We’re taught that we keep our issues with staffing, no breaks, long shifts, impacts on our own health, etc., to ourselves. We’re taught to suck it up and be martyrs for the cause and for the corporations that own our hospitals, to be grateful for the crumbs thrown to us by hospital “leaders” (that not once show up during a night like the one I described above) in the form of pizza parties and banners, all the while dealing with anxiety while driving to work and tears on the way home, UTIs from dehydration because there’s just no time to drink any water (or pee, after), time away from our families and fear that when we do see them, we might be bringing them some residual disease from work.