There is always a lot of buzz around wearables and using them to boost patient engagement. This Bloomberg piece caught my eye with its discussion of the “nocebo” effect. Where a placebo can make patients feel better, a nocebo that’s providing negative data could make patients feel worse. The article points out that not everyone “will truly benefit from 24-7 monitoring, arbitrary goals served up by an algorithm, and regular notifications telling you that you’re stressed, tired, fit, or simply ‘unproductive.’”

I definitely see this with my patients, who are frustrated by what they’re seeing with their bodies because they don’t understand it. For example, the patient starting a new workout plan who is frustrated due to weight gain might not understand that this is because they are building muscle.

During the course of the COVID-19 pandemic, many clinical informaticists have learned more about public health informatics than they ever imagined. The Strengthening the Technical Advancement & Readiness of Public Health via Health Information Exchange Program (STAR HIE Program) provides support for public health agencies who need to exchange health information during times of emergency. Although the program was initially funded by the CARES act in 2020, it was expanded in 2021 to further support efforts to increase vaccine data sharing between local or regional Immunization Information Systems and HIEs. Various projects have involved: improved delivery of COVID-19 test results; improved reporting among providers, hospitals, and public health agencies; providing accurate lists of non-vaccinated patients to improve vaccination rates; improved case reporting; and creation of new connections between HIEs, hospitals, and correctional facilities.

For those who think “COVID is over,” here’s another example that it’s not and we’re all in this together. Due to COVID-19 lockdowns in China, there is a global shortage of contrast dye that is needed for CT scans. This has resulted in some medical centers rationing CT scans. Organizations are used to having to message patients to reschedule appointments due to physician emergencies or illness, but having to cancel imaging procedures due to lack of supplies is a bit new, so I imagine there’s new reports and new outreach campaigns being created by IT teams. Much like the shortage of intravenous fluids that happened after a Hurricane Maria devastated Puerto Rico, the supply chain is weakened by having too few locations for the manufacture of critical supplies. The shortage is expected to last a few more months and hope this leads manufacturers and distributors to rethink their manufacturing strategies.

Quest Diagnostics releases the results of its 2022 Health at Work survey. They queried 800 workers at companies that had at least 100 employees about what kind of health plan benefits would encourage them to stay with their companies. They were also asked to weigh in on at-home healthcare. Although the majority of respondents (nearly 90%) believe health screenings and wellness initiatives are important benefits, they had concerns about privacy and how much their employer might be learning about an individual’s health. More than two-thirds of workers didn’t want their employers to know the results of health screenings, and more than half had concerns about employer involvement in patient healthcare. Employees are enthusiastic about at-home testing including biometrics and felt they would take advantage of more screenings if they could do them at home. A majority said that telehealth was a desirable benefit.

Remote monitoring is an exciting technology, but a recent article in JAMA Internal Medicine questions the outcomes of remote monitoring in managing heart failure patients who have been discharged from the hospital. It should be noted that the study was small – 290 men and 262 women – and the mean patient age was 64.5 years. The participants were randomized either usual care or to remote monitoring of medication use and weight management with financial incentives for adherence. The primary outcomes were time to hospital readmission and death. Researchers found that there was no significant difference in outcome scores over 12 months.

Personally, I’d like to see some slightly different research. For example, what does the data look like for using remote monitoring to prevent hospitalizations in the first place? Is the data different for patients in different parts of the country since this study was done regionally? I’d also be interested to understand how much patient involvement was present in the remote monitoring, and whether outcomes are better if patients have to be more or less involved in the monitoring.

The best article I saw this week was this: “Effect of Genre and amplitude of music during laparoscopic surgery.” Researchers proposed that since music is often present in the operating room, they’d like to examine the effect of different types of music and different volumes on surgical performance. The research subjects were “novice surgeons” who were measured on their performance of laparoscopic surgical techniques. Music was either soft rock by the Beatles or hard rock by AC/DC and was played at medium or high volume. Surgical task performance was measured on speed and accuracy. Those hearing soft rock at medium volume were faster and more accurate than doing those tasks without music. When the soft rock was played at high volume, the improvements were lost. Hard rock at medium volume led to faster precision cutting compared to no music. Hard rock at high volume also led to increased speed. The authors concluded that “our data reveal that the effect of music… might depend on the combination of music genre and amplitude. A generally well-accepted music genre in the right volume could improve the performance of novice surgeons during laparoscopic surgeries.” I discussed with my surgical colleagues and they would like to understand whether outcomes are different for experienced surgeons, but no one is ready to draft a research proposal just yet. 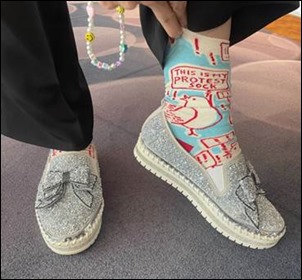 Shoes of the week: This sassy shoe-sock combo was spotted a conference tweet. They look very comfortable and I’m a sucker for sparkles, so if anyone has the details on these, I’d love to know where I can get a pair.

What’s your go-to slip-on shoe? Leave a comment or email me.