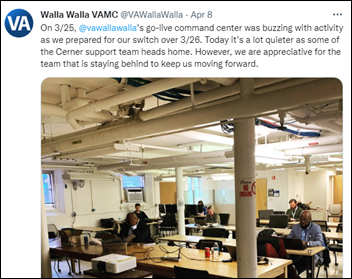 All federal Cerner systems – DoD, VA, and Coast Guard – went down for two hours Wednesday due to a server problem.

The irony is that the server in question was running database software from Oracle, soon to be Cerner’s owner in giving CIOs their “one throat to choke.”

VA Deputy Secretary Donald Remy says that the VA and Cerner will conduct a root cause analysis of the downtime.

Meanwhile, the VA’s Walla Walla facilities went live as planned on March 26. Columbus is up next on April 30.

Two-thirds of poll respondents were laid off or fired more than five years ago, and two-thirds of those said it turned out to be a good thing career-wise.

New poll to your right or here: What is the most significant result of hospital mergers?

Listening: Pink Floyd’s first new recording since 1994 in “Hey, Hey, Rise Up!,” a fundraiser that protests Russia’s invasion of Ukraine. The song features Boombox singer Andriy Khlyvnyuk, who cancelled the band’s US tour and returned to Ukraine to take up arms to defend his country.

A reader sent me a copy of the paywalled Axios piece whose author claims that $4 billion startup Olive “overpromises and underdelivers.” It’s not exactly a smoking gun or a showcase of investigative journalism technique, obsessing instead with the company’s being “buzzy,” richly valued by investors, and driving purple buses around conferences. The article’s click-baity headline seems equally prone to underdelivering: 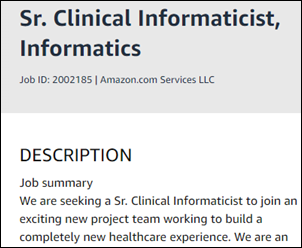 Amazon lists another interesting healthcare job. The senior clinical informaticist will join a team that is building “a completely new healthcare experience” (quibblers such as myself might point out that the “completely” is redundant and “new” might be as well). The job involves Amazon Care’s clinical systems, specifically its EHR.

It’s a slow news weekend, so I caught up on tweets from iconoclast Jay Parkinson, MD, MPH, who is about to launch a new venture, but meanwhile has some fresh thoughts that interest me (paraphrasing):