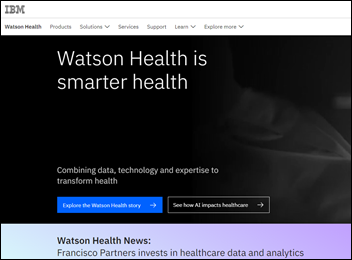 IBM announces that it will sell its Watson Health business to private equity firm Francisco Partners. Terms were not disclosed, but previous reports suggested a price in the $1 billion range.

IBM says the sale will allow it to focus more on its platform-based hybrid cloud and AI strategy.

An analyst said last week that IBM is shedding assets that divert its attention, require capital investment, and present a risk to the company’s reputation, concluding that “Watson Health certainly qualifies for all three.”

From Policia: “Re: IBM Watson Health. Not a great buy by Francisco Partners.” Damaged goods and an anxious seller can offer opportunity to a buyer, especially if their intention is a quick flip (which is always the hope of private equity firms). Thoughts from the cheap seats that we all occupy unless we were sitting in the deal meetings:

The biggest drop in social network use is Facebook, poll respondents say, with Twitter a distant second. Annoyingly posted Wordle scores may send more users fleeing as did Farmville and other mindless games before it.

New poll to your right or here: What are your HIMSS22 plans for in-person attendance? I’m thinking about running a “guess the attendance” contest, but I’m cautious since the big HIMSS21 numbers didn’t jibe with the ghost town I saw.

The UCLA Center for Smart Health and Hearst Health will jointly offer the Hearst Health Prize, which will recognize data science initiatives that improve outcomes. The award is changing from its previous focus on population health, as offered by by Thomas Jefferson University.

A Defacto Health analysis finds that two-thirds of payers have implemented provider directory APIs as required by CMS since July 1, 2021. The rule is intended to increase provider network transparency and to encourage third-party developers to create patient access tools for in-network provider search and health plan shopping.

Employees of Ascension St. Vincent’s (FL) who were overpaid during the three pay periods of Kronos payroll system downtime complain that the hospital gave them one week’s notice that it will start garnishing 50% of each paycheck until the overpayment is returned. The hospital responded to a TV station’s inquiry by saying that it will offer flexibility to the overpaid employees, including allowing them to apply unused PTO hours to the money owed. I can say from experience that trying to get hospital employees to return money they never should have been paid is a near-impossible task that creates a lot of puzzling anger of the “I already spent it” variety.

Data protection magazine CPO runs an article whose title of “Big Tech’s Brazen HIPAA Violations Are Unethical, Immoral, and Legally Actionable” is 33% incorrect since HIPAA is binding only on covered entities and their business associates, not Facebook or Google. The author believes that his phone sent his Google Maps location to Google, which then served up healthcare-related ads. That would suggest that he had not disabled geolocation on his phone and browser. You have to accept HIPAA for what it is, not what you want it to be.

The local TV station’s “Problem Solvers” fails to solve the problem of a mother who was billed an $850 facility fee for a video visit. Children’s Hospital Colorado suggested that the TV station “speak to other providers, insurers, and legislators” to make insurance more widely available, but declined to justify or reduce the charge. The mother was especially annoyed that some of the physicians on the call were also sitting at home, equally far from the facility for which she was paying but nobody was using.