Thanks for noting the important role that pathologists have had in developing health information systems. I’m not a pathologist but, during my training, I had the privilege of working with Dr. George Gantner, the St. Louis City and County Medical Examiner, who was a giant of forensic pathology. It was only many years later when I got into medical informatics that I learned he was also involved with the evolution of the Systematized Nomenclature of Pathology (SNP) into SNOMED! (Path Fan)

I wonder how many end users these unmanaged [Higi] kiosks have. They seem to function as a fancy gadget for the sales team to trot out as an add on to another service. (IANAL)

What I see is that people who work from home feel they are more efficient at the expense of others who now have to fill in the gaps for them. 5 minute conversation across cubes to get something done, now requires emails being sent for a potential reply next day responding to questions with more questions. Some people are very good at that (responding to questions with questions) and very efficient. (Robo Writer)

There was a statistic from several years ago about the “cost” of interruptions for programmers, and the surveyor calculated that it costs 28 minutes of productivity for each interruption, due to mental context-switching. If we’re going to go down that spoke, I’d be curious to see how people’s answers correlate with the type of work they do. I would bet that people whose jobs are task-oriented find WFH (theirs or their colleagues) difficult while people who work in programming, research, or other types of work that require silence and long stretches of uninterrupted thought are having a much better time in an isolated environment. (HIT Girl)

Holmes: There’s a lot of talk about the “fake it until you can make it” mind set of Silicon Valley startups. Boo-hoo when VC firms and high net-worth individuals fall for a con. Her downfall was outright lying about the accuracy of critical medical tests. Time for jail when you knowingly and repeatedly put patients lives at risk. (AnotherDave)

I truly believe Epic is the best solution in the market. My only concern is that Epic is most innovative when responding to Cerner development. I’m worried a one horse race will slow down the pace of improvement. Meditech just isn’t a strong enough threat to spur Epic on to greatness. We need more competition to prevent stagnation. (Competition Please) 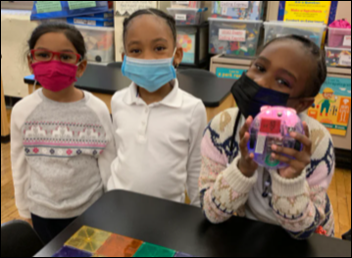 Readers funded the Donors Choose teacher grant request of STEM science teacher Ms. K in S. Ozone Park, NY, who asked for programmable robots for her elementary school class. She reports, “Having a Blue-Bot Robot in my STEM classroom makes a huge difference! Students have been learning how to code. Blue-Bot lights up and makes sounds. You can see inside of it, which the students all really love. Thank you so much for giving me the chance to expose my students to cool robots like this one and for them to have such a great time!” 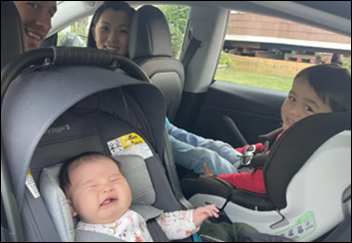 Hospital employees refer to a newborn as “the Tesla baby” whose parents rushed to the hospital with their Tesla placed in autopilot mode so the father could assist his laboring wife during the 20-minute rush hour drive.

Lake Superior State University publishes its annual list of annoying and overused words and phrases whose use should be banned:

My nominations for next year:

A state hazmat team is called in to decontaminate the ED of Falmouth Hospital (MA) when discharged patient immediately overdosed outside the hospital, was brought back to the ED for treatment, and made seven police officers and staff members with whom he was fighting dizzy from fentanyl dust. 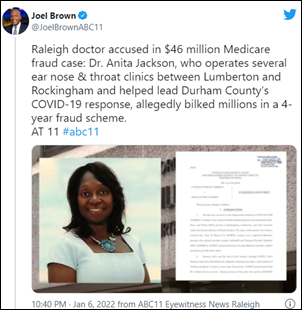 A federal grand jury indicts the physician-owner of several rural North Carolina ENT clinics for fraudulently billing Medicare for $46 million worth of balloon sinuplasty surgeries, making her the top-paid provider of those services in the US even though her practices were not in a major metropolitan area. Anita Jackson, MD — whose LinkedIn lists degrees from Princeton, Stanford, and Harvard; played a key role in Durham County’s COVID-19 response; and was appointed to the state’s Medical Care Commission – promised patients they would owe no co-pay and also re-used the single-use devices without their knowledge, according to the charges. 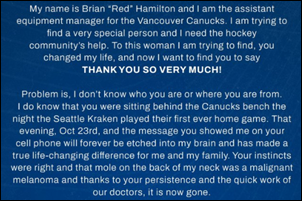 The Seattle and Vancouver hockey teams donate $10,000 to 22-year-old crisis hotline intervention specialist Nadia Popovici, who urged a Vancouver equipment manager to see a doctor about a mole she saw on his neck that appeared cancerous. His doctor removed a melanoma that could have killed him within 4-5 years. The Vancouver Canucks tracked Popovici down via social media and brought her to a game to give her a $10,000 scholarship to medical school, which she will attend in the fall once she decides which of the two that have accepted her to attend.