Thank you for honoring our dear Dr. Virginia K. Saba. She was a colleague, educator, mentor, and friend to many. Her influence is international. Her work will carry on through the multitude of nurses and others she has mentored. Dr. Saba promoted her Clinical Care Classification to the very end. Her legacy also will continue with two named awards that she endowed administered by Sigma and AMIA. (Susan K. Newbold)

Re: The WSJ Article: I think one of the takeaways from that article is that operations, both clinical and business, needs to take ownership of their role in decision-making, priorities, strategy, etc. In a lot of organizations (including my own), I don’t see this happening well. Many departments are fine with throwing things over the wall as an “IS problem” instead of an organizational problem. That puts IS (or IT) in a bad spot and enforces the image of IS being a barrier. (Ralphie)

I think getting into healthcare regulatory reporting software would make a ton of sense for InterSsystems. InterSystems has an existing relationship with almost every health system running Epic. InterSystems has an integration product, and the majority of the work in integration projects are related to understanding the organizations data and understanding the organizations process. If you do regulatory software, you also have to do the work to understand data and processes in order to compare that to what the government expects. (IANAL)

If you implemented distributed IT at my employers, the result would be an unsatisfactory mess. Some few departments would be organized and effective. The majority would be rather distracted and neglectful  (IT is neither their interest nor their core competency). A few would do the absolute minimum, which might mean they do nothing at all. Most companies wind up with a central IT department. I don’t think that’s an accident. Truly distributed businesses are a rarity; trying to shoe-horn in IT as distributed, when everything else is centralized? It’s a culture clash and a recipe for big problems. It’s one thing to identify a problem, WSJ. It’s quite another to recommend a solution which will be helpful. (Brian Too)

About that WSJ article. I take EXTREME exception to the author’s assertion about the type of people that work in healthcare IT. I can tell you most, if not all that I have worked with do so because of the greater good and being part of something that matters. (Justa CIO)

Having acknowledged those failures, the wheels didn’t come off [on Athenahealth] until Elliott got rid of Bush, through questionable means, and forced an acquisition. It’s extremely charitable to call Elliot’s involvement merely “applying discipline.” Hundreds of employees were laid off, which Bush and his management team initially refused to do. Benefits were scaled back. Products were cancelled. Market segments were eliminated. Investment in R&D was significantly reduced. Efficiencies and discipline that leads to greater shareholder value could have been achieved without going to those extremes. I’m of the opinion that shareholder interests are important, but they should be balanced by customer and employee interests. Elliot only realized those gains by prioritizing shareholder interests (and primarily their own, at that) over those of customers and employees  (who don’t have a voice in the boardroom, of course). So who won in the end? Certainly not customers. (Ex-Athena)

Elliott did quite a bit better than 3x on its investment [in Athenahealth]. The original deal was funded with about $4.8B of debt and $1B of equity from the hedge fund sponsors. Add in the acquisition cost of Centricity (call it $500M of equity, $500M of debt) and the equity investors are all-in with $1.5B of equity and $5.3B of debt. They sold off some assets for a total of ~$600M in cash, so net equity in play is $900M. They turned that equity into $11.7B (assuming no interim debt pay down), which is a 13x return. 13x feels ridiculous, but if you’d invested that same levered-up $6.8B in the Nasdaq (QQQ) on the same timeline (Elliott began buying ATHN in spring 2017), you could sell today for $18.1B. Absurd as this whole deal sounds, it has actually underperformed the market. This story is more about tech multiple expansion/bubble broadly than it is about improving management or running the business. (Debtor) 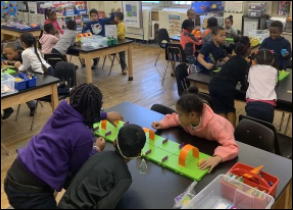 Generous “Giving Tuesday” donations from Vicki and Mark (Mark’s was made in honor of the IT professionals of Atlantic Health System), with matching money from several sources along with my Anonymous Vendor Executive, allowed me to fully fund these teacher projects, nearly all of which involve historically underfunded schools: 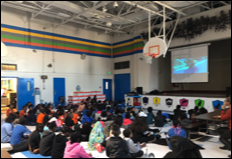 Ms. P checked in with an update on the projector and remote control presenter readers provided to her Baltimore elementary school via Donors Choose donations: “Thank you! The technology has really helped transform family events, classroom experiences, staff professional developments, and more. The projector has allowed me to project presentations that converted our learning. Students were able to see across the classroom the texts we were discussing, videos to supplement the work, and dance it out to ‘brain breaks.’ The projector was also utilized for family and student events. For example, students who had perfect attendance got to watch a movie with snacks and another time, we utilized the projector to share a presentation that discussed health to families. It was great! Instead of being hovered around a tiny computer screen or only having paper copies of the materials, we were able to create a view large enough for all to see! The most exciting part about receiving the items was seeing the students react! They were so grateful that people they never met and some they knew chose to donate to support them. They were appreciative that people cared about their education and making it fun. So thank you again for thinking of my kiddos!” 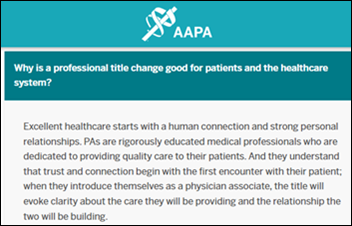 Physicians are complaining that physician assistants – who say that their jobs haven’t required hands-on physician oversight for decades – are pushing to change their titles to “physician associates.” The AMA says the new name would confuse patients and is intended to position PA’s for independent practice. Another group pushing for a name change is the former American Association of Nurse Anesthetists (they changed the last word to “anesthesiology” last year), who said “anesthetist” was confusing to the public and hard to pronounce, but they note that the new title still labels them as nurses rather than physicians even though “we’re doing the lion’s share of anesthetics in this country.” Both name changes were chosen carefully to preserve the all-important existing abbreviations.

A South Carolina rehab center’s director of nursing is indicted on federal charges of creating phony COVID-19 vaccination cards, then lying to FBI and HHS. Her lawyer says she only made a couple of fake vaccination cards to “help” an anti-vaxxer family member. 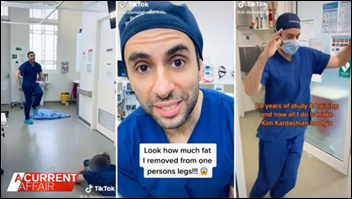 In Australia, a cosmetic surgeon who has 13 million TikTok followers is ordered to temporarily stop practicing medicine pending an investigation into issues with hygiene, safety, and surgical mistakes. Daniel Aronov, MBBS was also ordered to take down his social media accounts, which included photos of near-nude female patients and explicit lyrics. Australia allows anyone with a basic medical degree and no specific training – such as Dr. Aronov, who is a GP – to call themselves cosmetic surgeons. 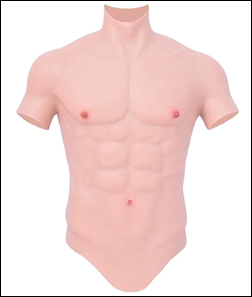 In Italy, a dentist is charged with fraud after a healthcare worker notices that the veinless arm that he bared for his COVID-19 shot was in fact artificial. The man, who was trying to obtain the country’s Green Pass that requires vaccination for most public activities, asked the worker to ignore his failed attempt and said, “Would you have imagined that I’d have such a physique?” The local newspaper speculates that he bought a male chest suit from Amazon since someone commented on that listing in Italian, “If I go with this, will they notice? Maybe beneath the silicone I’ll even put on some extra clothes to avoid the needle reaching my real arm.”