The thing that caught my eye from the Aaron Martin article was the quote about health tech companies compared to health systems. Talking about Apple and Amazon or whatever is how you get CEOs to pay attention to you, because CEOs eat up those business book-style quotes from Jeff Bezos. Big tech companies aren’t interested in changing healthcare, but they have so much cash that it is coming out their ears, so they’ll try whatever. Healthcare services companies with tech dressing are the ones who are really taking a run at traditional payers and providers. (IANAL)

[At Epic] it was pretty imperative that if you were supporting a go-live at a customer you did not implement at, that you were careful not to mention unimplemented features to end users since those decisions were made at a higher level than a frontline nurse, for example. That doesn’t mean we just ignored these findings – there were mechanisms to bring these requests back to implementation / technical support teams, which were then laddered up to customer leadership to assess and prioritize. (HITPM) 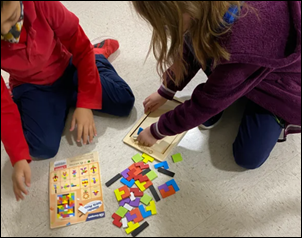 Readers funded the Donor Choose teacher grant request of Ms. M in Alabama, who asked for STEM kits for her elementary school class. She reported in February, “It has been amazing to see students happy and excited to come to school at 6:30 a.m.! Many students who attend before-school care were not excited to be there so early. These materials have made a huge impact. They are excited and learning so much both before school and after school. When students saw the materials, they were shocked and could not believe these materials were for them. They have explored, worked together, had amazing conversations, and have become problem solvers. Second grade students are now mentoring younger students using these resources. This is an amazing benefit that I did not plan. They are investigating and using collaborative conversations and posing their own problems and working toward solutions. Thank you for your willingness to support students!”

A Louisiana man who became impatient that a hospital wasn’t seeing him quickly enough following a car accident steals an EMS ambulance that is parked outside, drives it to another hospital to seek care where he was also not seen promptly, then is pursued by police officers in a 10-mile chase down Interstate 10. He was arrested inside the office of his primary care physician, where he had driven the ambulance and hit a parked car before going in.

A VA hospital anesthesia department employee tweets a screenshot of a 72-year-old veteran’s pre-op note to mock his government-paid penile implant surgery. The DC hospital hasn’t said that it has fired the employee, but indicated that their medical records access has been revoked. 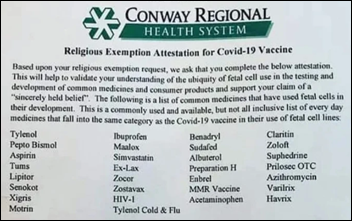 Conway Regional Health System (AR) requires employees who claim a religious exemption to mandatory COVID-19 vaccination to attest that they won’t use the many other products that are derived from fetal cells.

A Nevada man’s 100-day, $2 million COVID-19 hospital stay leaves him with a bill for $80,000 of insurer-denied payments because the doctors who treated him were out of network. Dignity Health says it can’t get involved in disputes between insurance companies and its contracted intensivist company.

Lewis County Health System, a small hospital in upstate New York, will stop delivering babies now that six of its 18 maternity department employees have refused mandatory COVID-19 vaccination and another seven haven’t said either way. The conservative county has one of the lowest vaccination rates in the state at 44% and 30 of the hospital’s 464 employees have already quit ahead of the September 27 vaccination deadline. The hospital says its plans could change if it can hire agency nurses or if a legal challenge against its vaccination policy is successful.