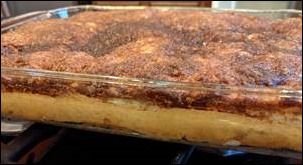 This was a rough week on a number of fronts, and I had to resort to some pastry therapy. I wasn’t sure what to think about sopapilla cheesecake initially, but it made my house smell amazing. I’m a big fan of butter, but I think it’s actually possible this recipe had too much, if that could even be a thing. Now to wait for three hours for it to chill, and then I’ll be able to give the final verdict.

The best thing about the week was hearing from my friends at the Office of the National Coordinator for Health Information Technology, in response to my earlier post covering topics such as information blocking, the 21st Century Cures Act, and patients’ access to their notes. They brought up some really good points in response to the post and I wanted to share them, since there are some good clarifications as well as links to resources, FAQs, and more.

Regarding some of the specific issues raised in your post:

Re: Types of notes

Re: Health care providers subject to the rule

Re: Exception for harm

Re: Scope of medical record

Finally, we’re making every effort to help the industry with this transition. Let us know how we can help!

I appreciate their input and the open lines of communication. It’s always good to know that the powers that be are reading and are willing to help us better understand the work that we’re all trying to do together.

I got a chuckle out of a headline in an email that talked about Epic looking to grow its Twitter presence after noticing that its customers use the platform “quite a lot.” The Wisconsin State Journal reports that Epic has created a Twitter account for its new website, epicshare.org, which is designed for client organizations to share ideas and receive information from the vendor. The site also features a “Hey Judy” page that shares “Thoughts and Stories from Judy.” So far, @EpicShares has 215 followers, yours truly included. It will be interested to see how the software giant fares on Twitter since this is its first foray into that social media space.

I was curious about a quote from Leela Vaughn, Epic senior executive, regarding patient use the site. Vaughn noted that “Anybody can be reading these and showing them to their doctor” and that the site was written in a way where they “really worked hard on getting rid of the jargon” so that it could be useful “to people who aren’t super tech savvy.” Physicians already have to worry enough about patients who take the “ask your doctor” advice seriously for every TV commercial they see for a new drug – I can’t imagine what physicians will think when their patients come in and begin quoting things that they read on an EHR vendor website. For one, the vast majority of physicians are not attuned to what Epic is doing as a company – they’re just trying to keep their heads down and see patients, while surviving the pandemic. I’d be curious to see what others think about this approach.

Mr. H previously mentioned the MyMountSinai app, designed to offer patients additional features that aren’t available in their Epic MyChart mobile app. One of the features that is included is the ability to upload COVID-19 vaccine cards. It would be interesting to know if the app allows the data from those vaccine cards to populate the patient’s medical record and function in the same way that vaccine data would function had the vaccines been natively documented in the health system’s record. I have multiple physicians on different instances of MyChart and it still surprises me that they don’t recognize each other’s data. For example, one system continually prompts me for vaccines and services that are documented in the other record, even though I know they have the capability to recognize those care elements behind the scenes. That’s the kind of information blocking we need to get rid of at the patient level, and doing so would make things easier for both patients and providers. The app also includes the ability to schedule visits with new providers and wayfinding assistance for some of its facilities.

Sobering statistics: 1 in 500 people in the US have died of COVID-19. As of Tuesday, more than 663,000 people have been lost to the disease. I remember the early days of the pandemic when we hoped that interventions might cap the deaths at 60,000 or 70,000 and how horrified we were at those numbers. Now we’re exceeding that by a factor of 10 and plenty of people don’t bat an eye. Every one of those casualties was something to someone – a mother, father, sibling, grandparent, friend, or neighbor. As a physician, I’m tired of hearing from people that this is no big deal, or that people didn’t really die “from” COVID-19 they just died “with” it, etc. Frankly, your healthcare teams no longer want to hear it. It’s exhausting and it just needs to stop.