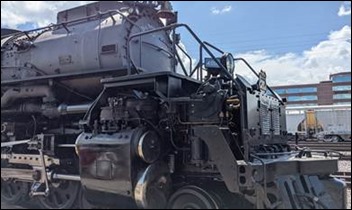 During the past couple of weeks, I have spent some quality time doing decidedly low-tech things. I know I’m going to be starting a big project soon and plan to be heads-down for many months, so I’ve been trying to get as much adventure on the calendar as I can.

Camping is one of my low-tech pastimes and sometimes it’s just good to get away from the hustle and bustle, although I did enjoy having the option of firing up the hotspot and getting a little work done while I was away. I can’t say I enjoyed the ridiculous humidity or the high number of spiders that wanted to join me in my tent, but overall, it was a good couple of days away.

I also had the opportunity to take an 80-year trip back in time. The Union Pacific “Big Boy” 4014 locomotive has been touring the US, delighting tens of thousands of fans as it carves a figure eight covering Wyoming, Nebraska, Kansas, Oklahoma, Texas, Louisiana, Arkansas, Missouri, and Colorado. Having spent a good chunk of my career in healthcare IT, I’m a fan of complex systems. However, you haven’t seen a complex operation until you’ve seen what it takes to run an 80-year-old steam locomotive in the modern world. The Big Boy class of steam locomotives was the largest ever built, and they were originally used to haul freight over the Wasatch mountains. At the time, supporting infrastructure along the route would have included water tanks to keep the boiler full as well as maintenance facilities that could handle such a beast.

Needless to say, nothing like that exists in the US any more, so the train is accompanied by fuel trucks that can supply the recycled oil it runs on after being converted from coal. It also runs with multiple water cars to supply the 100 gallons it goes through each mile as well as a customized tool car that contains nearly everything it takes to keep it running. The train stops every couple of hours for maintenance and lubrication and is accompanied by a “helper” diesel engine to supply dynamic braking so that the antique doesn’t wear out its own brake shoes, since they have to be changed from below and nowhere on the tour has a roundhouse that can support a 1.2-million-pound locomotive. Stopping every couple of hours also allows people all over the US to come out and see it.

Just looking at all the piping, valves, gaskets, and hardware on the locomotive reminds me of the most complex and ancient IT systems I’ve worked with – those where any number of points of failure can bring the system to its knees and there are only a handful of people with the knowledge and skills to keep them running. During the stop I visited, I was able to see the Union Pacific “pit crew” in action getting the Big Boy ready to move out. In addition to replacing a gasket and refilling the water cars, they also performed some “percussive maintenance” on a couple of parts. and I think we can all sympathize with systems that we want to hit with a hammer at times, although the Union Pacific Steam Team gets to do it for real.

Seeing the Big Boy’s crew in action was also a great study in team dynamics. They clearly have made it to the performing stage of team development and were working in 100-degree heat with complete focus and dedication. The head of the team was spotted stabilizing a ladder for another crew member, which reminded me of some of the hospital administrators that I most enjoyed working with, those who weren’t afraid to roll up their sleeves and get to work when things got tough.

In between tasks, they were being peppered with questions from the crowd, which they always answered with a smile. Since they’re essentially rock stars of the railroading world, they were also being asked to autograph all kinds of memorabilia. Watching them interact with the children in attendance, many of whom were dressed like the crew, was priceless. One of the highlights was watching the team’s leader stand on the roof of the cab and capture video of the crowd. Seeing thousands of people come out to admire your work has to be a pretty big rush, I’d imagine.

I was also happy to learn about some of the problem solving that had to happen during the locomotive’s restoration. Much like our work in healthcare (and especially in healthcare IT) if the team didn’t have what they needed to get the job done, they had to figure out how to create it. Where they might be fabricating replacements for 80-year-old parts (as well as the tools to service them) we’re often creating solutions to problems that at times feel like they’re being randomly thrown in our direction. Since patient care is at stake, we don’t have the option of not solving them, so we have to get creative and sometimes cobble things together to get the job done. Those of us supporting legacy systems have to learn how to do things we never thought would be on our plate, and it was a good reminder that every day is a new adventure.

As dark as some of my healthcare days have been over the past year and a half, seeing the crowd at the display event gave me a lot of hope. The Big Boy brought out people of all ages, from newborns in carriers to a woman who was 99 years old, as well as different social, economic, and cultural groups. Despite a mix of masked and unmasked attendees at the outdoor event (although masks were required for those entering the actual railcars) and despite the heat and the fairly crowded conditions, I didn’t hear a single negative word about anything. People were so intent on just experiencing the wonder of the situation that everything else was secondary. When people were inadvertently jostled or bumped, apologies were given from both sides, which is seemingly rare in these days. Union Pacific kept the crowd well supplied with ice water and places to rest in the shade and provided golf carts for those who needed assistance. There was no jockeying for places to take pictures, everyone waited their turn, and it was just a pleasant time to experience a taste of the past. Best of all it was free, so kudos to Union Pacific for an outstanding public relations event that gave a lot of people great joy.

I’ll definitely go into this week with a new appreciation of the concept of hard work, as well as a boost in my mood based on my encounter with the Big Boy and all of its fans. Here’s to better times where everyone can rally around something that unites us and puts a smile on all our faces.

Have you ever heard a steam whistle that rings right through to your soul? Leave a comment or email me.