From Ephraim: “Re: news items. How many readers click to the announcement or story you link to?” I don’t track those clicks, but I will say that if I’ve done my job well in summarizing the news item, most readers won’t need to click over. I only run items that I consider newsworthy (which excludes probably 95% of industry PR), so I expect that many readers get the gist (the company, the person, or whatever the item relates to) without actually clicking anything. My experience with Twitter is similar – most people skim the tweet but don’t click to learn more.

From Yes Sars: “Re: COVID-19. Time to start up your COVID-19 news section again?” Maybe, if readers want me to. I thought pandemic doom scrolling was behind us given availability of an effective, safe, and free vaccine, but here we are again with overcrowded hospitals.

Jenn put together our HIMSS21 guide (PDF version), which includes the participation information of those of my sponsors that submitted it.

I’ve heard from maybe three tiny companies that they have decided to join Medicomp and Olive in cancelling their HIMSS21 exhibitor plans. The exhibitor count has dropped by only three in the past few days, although that might be questionably useful information unless those companies notify HIMSS and they are removed from the exhibitor list quickly. I will play Las Vegas bookmaker and place the odds at 70% that the conference will go on and will increase those odds to 95% if HIMSS doesn’t cancel it Monday. Not much else could go wrong unless Las Vegas cracks down in ways that would be hard to fathom given its historical focus on protecting tourism revenue. I assume HIMSS won’t refund attendee registration fees under any circumstances since they cover both the in-person and virtual version and the latter allows checking the box as delivered, but exhibitor fees that also include rolled-over HIMSS20 credits would be hit hard if the exhibit hall is cancelled. I would cancel my own attendance except I think readers have a strong interest in living it vicariously.

It’s a fairly even poll respondent split of who is most responsible for the VA’s Cerner rollout issues. My take: nearly all of the misfires were by the VA, which has a long history of struggling to successfully complete projects, but perhaps compounding the issue is Cerner acting as its own prime contractor. The question is whether Cerner told the VA about the training, infrastructure, budgeting, and support issues and nothing was done, or if Cerner drew a box around what it considered as its responsibility and let VA worry about the rest. Epic’s implementation approach would have put problems front and center, but that doesn’t mean that VA would be as obedient to fix them compared to a health system with hundreds of millions of dollars on the line. DoD seems to be doing pretty well with its Cerner rollouts and using Cerner’s services successfully, or at least we aren’t hearing as much about any problems.

New poll to your right or here: Would you as a patient be OK with having contact with a masked health system employee who hasn’t received COVID-19 vaccine?

WellSky will acquire Healthify, which connects providers with community-based social services organizations to address social determinants of health of patients. Terms were not disclosed. Healthify had raised $26 million, including $16 million in a Series B round in November 2019.

A newspaper in Ireland says that Amwell paid $250 million for Ireland-based SilverCloud Health and $70 million for Conversa Health in the combined acquisition that was announced only at a total of $320 million. The companies had raised $26 million and $34 million respectively and have $15 million in combined annual revenue, meaning Amwell paid 21 times revenue.

Vocera announces Q2 results: revenue up 19%, adjusted EPS $0.15 versus $0.08, beating Wall Street expectations for both. From the earnings call: the company had six sales of more than $1 million in the quarter and follows its largest sale ever to Providence  in Q1. VCRA shares are up 36% in the past 12 months, valuing the company at $1.4 billion. 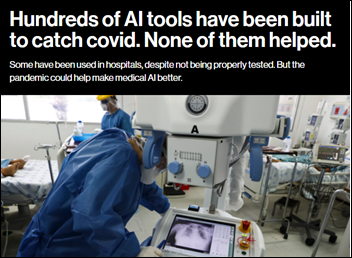 MIT Technology Review notes that AI tools that were supposed to help hospitals diagnose or triage COVID-19 patients didn’t accomplish anything, though a few turned out to be harmful. Significant problems included the use of quickly published and low quality data, researchers using data whose provenance wasn’t considered, and showing falsely accurate results by testing systems on the same data they were trained on. One system was trained on chest scans that the researcher didn’t know were limited to children, and instead of the system learning to recognize COVID versus non-COVID patients, it simply learned to recognize that the image was that of a child. Another issue is that researchers can’t make a name for themselves by validating or improving existing models, so they create new models that incorporate all the mistakes that were made by previous researchers.

Epic will require all of its US-based employees to be fully vaccinated by October 1. The company says that nearly 97% of its Verona-based staff already meet that requirement. Epic will require masks for meetings if the room occupancy is 75% or more or if any attendee voices a preference that masks be worn.

Ozarks Healthcare (MO) posts a video of CMIO Priscilla Frase, MD describing how some patients are wearing disguises and pleading anonymity when coming in for COVID-19 vaccine over concerns about the negative reaction of their friends, family, and co-workers.