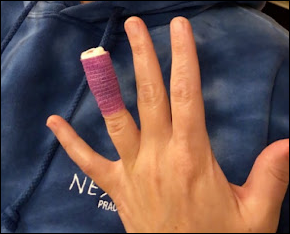 I learned a valuable lesson in procrastination today, as I delayed writing until after I had an unfortunate encounter with a cheese knife. It was a classic blunder because I was in a hurry, and now I get to figure out how to type with fewer digits because I forgot how much finger lacerations hurt. It’s a good thing I’m not seeing patients in person right now because proper hand hygiene would certainly be a challenge. Public service announcement: don’t cut toward yourself, folks.

I should be practicing music in preparation for a recording that’s due soon, but that’s not going to happen. In the meantime, I’m recuperating by catching up on my journal articles and some light Netflix watching, which I almost never get to do. One of the first articles to catch my eye is timely given the state of burnout among my healthcare colleagues. It deals with the evaluation of resident physicians as to their level of “grit” and its association with wellness outcomes. The personality trait of grit is defined as “perseverance and passion for long-term goals.” Grit has been associated with conscientious behavior and higher levels of hope. In healthcare, those with higher grit scores have been associated with lower burnout scores.

The article looks specifically at the association of grit scores in surgical residents with burnout, thoughts of leaving the program, and thoughts of suicide. Researchers tested residents following the 2018 American Board of Surgery In-Training Examination. Where previous studies looked at data for residents in a single institution, this approach allowed them to look at nearly all clinically active surgical residents. Although the scores varied between programs, they found that residents with higher grit scores were less likely to have burnout, thoughts of quitting, or thoughts of suicide. It also confirmed that residents overall continue to have unacceptable levels of burnout, suicidal thoughts, and thoughts about leaving their training programs.

Fast-forward a couple of years and we have a situation where physicians and other healthcare providers around the world have been pushed to the brink. Many of them are working hours that are similar to what they worked in residency or their training programs, except now they’re responsible for these larger patient loads and sicker patients rather than being in training. It’s a heavy burden to bear and this week I saw four more of my colleagues resign from medicine. Mentally it seems worse, I think, because the patients are often in the situations that they are in by choice – by refusal to vaccinate, wear a mask, or practice social distancing. It’s hard to manage the cognitive dissonance around putting yourself at risk caring for others who didn’t take basic precautions.

As a clinical informaticist, I’ve learned to tread lightly around physicians and other care team members who are stressed. It’s important to know what else has been going on in their days before figuring out the best approach to training them or working with them in meetings. For example, did the OB/GYN on the committee just come out of a disastrous delivery, and that’s why they are disengaged or sound angry? Was it a difficult day in clinic? Lately, it seems like all the practicing physicians with whom I work are stressed every single day, which makes it hard to take projects forward when you need their input. I’m seeing many more canceled and rescheduled meetings and lots of schedule juggling. I’m having to think of entirely different ways to work with some of my end users while they struggle to balance all of the different pressures that they are under.

Lately it seems like they never get a break. The younger clinicians seem particularly stressed because school is starting soon. Most of them have planned for their children to attend in-person school, and the thought that our local COVID case numbers might change that is pushing them to the brink. It’s hard to get people to want to engage with you around designing order sets or evaluating potential clinical workflows when they are worried about childcare. We’ve seen a drop-off in participation in some of our committees and work groups as well. It seems people are just not willing to spend any more time at the workplace than they absolutely have to.

It doesn’t seem like video calls are the answer due to a tremendous amount of Zoom fatigue. We are having to think outside the box on how to engage people while also respecting their need for work/life balance. It’s important that we have good representation from different types of users with different types of needs, so we’re going to have to figure it out.

As clinical users become more stressed by patient care activities, they have less tolerance for misbehaving technical systems. What used to be small annoyances that users would ignore now seem to be more disruptive. If the EHR is running slow or there are any performance lags, it causes much more angst. Any buffer of resilience has been completely eroded over the last year. Most of the clinical organizations I work with have placed new non-essential tech initiatives on hold in order to give their budgets some breathing room, and it’s probably a good thing because it also gives their personnel some breathing room. For those that are moving ahead with big projects, I’m making sure they think about how they’re going to best support their users through the transitions.

I’m curious how other organizations are coping with the stresses of our new healthcare normal. Maybe there are some change leadership Jedi tricks that I haven’t learned yet that would be of benefit. Or perhaps the solution is to just slow down and give people some breathing room so that they can focus on patient care and self-care. Or maybe there are no good answers, and we just have to continue putting one foot in front of the other each day and hope for the best.

How gritty are your clinicians, and will they be able to rebound? Leave a comment or email me.