The New York Times says that IBM Watson failed to achieve its goals to transform industries and make IBM successful. It says that Watson’s capabilities were oversold by IBM’s top executives – mostly former sales and services people – who ignored the warnings of the company’s scientists that it was a one-trick pony that was built purely to win “Jeopardy.”

The article notes that Watson’s healthcare “moon shot” failed in multiple health systems, as the technology was not capable of performing real-time cancer diagnosis or smart literature searches. IBM has discontinued its genomics and oncology offerings after they failed in high-profile health systems.

NYT says Watson is “a sobering example of the pitfalls of technological hype and hubris around AI,” but says the technology has improved to the point that it can manage workhorse natural language tasks as offered by IBM’s cloud competitors, such as task automation and virtual assistants.

From He’s Not Here: “Re: remote patient monitoring. Doesn’t that term contain a bit of geographic paternalism?” It does. Healthcare was historically built around the “my patients come to where I am” model, where other than for the rare house call, the provider has always sat in their building and waited for people in need to show up. I would say that in itself is not paternalistic since it’s no different than any other retail or professional business that doesn’t involve services that are provided in the home or on the road, but the idea that a patient is “remote” begs the question, remote from what? It’s the same as “after hours” care – after whose hours? Still, while some monitoring could be performed regardless of patient location, the capability must exist to react to it by dispatching humans, and that’s a last-mile problem for many patients, especially when health systems and the emergency services providers who have boots on the ground are almost always disconnected and sometimes competitive. 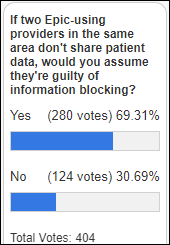 Most poll respondents presume that information blocking exists when Epic-using providers in the same area aren’t sharing patient data. My opinion is that we know that most EHRs can exchange patient data – as evidenced by at least one client of each vendor who is actually doing it – so ONC should focus on eliminating the “we weren’t aware” provider excuse via outreach and setting patient expectations to increase interoperability demand.

New poll to your right or here: Which tech company will have the most impact on US healthcare in five years? I will leave it up to respondents to define “healthcare impact.”

Dear companies – while I appreciate the option to engage with your website chatbot even though I can’t imagine a situation in which I would actually do so, please do not make it beep at me, especially every time I navigate to a new page of your site. That’s not exactly a testament to your software usability expertise.

We’re doing some pre-HIMSS summer slacking off around here lately. Jenn was vacating last week so we posted few sponsor updates, while I was day-tripping with Mrs. HIStalk Friday and elected to skip writing the Weekender. It feels good to have places to go and things to do after losing last summer to hunkering down, but sometimes having so many options available again makes me anxious that I’ll miss something. 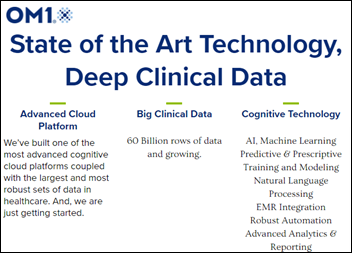 Gary Christoph, PhD died earlier this month of Parkinson’s Disease at 76. He spent time as CIO of HCFA (now CMS), leading it through Y2K and cybersecurity and writing many of the regulations contained in HIPAA. He also led IT for NIH and Northrop Grumman’s healthcare IT group.

The Senate confirms Donald Remy, JD as VA deputy secretary, its second-highest official. He will take charge of the VA’s Cerner project. Remy, who was confirmed in a 91-8 vote, is an Army veteran and COO / chief legal officer of NCAA.

A patient advocacy group’s review of the websites of 500 hospitals finds that 471 have not posted their prices as required by federal transparency rules that took effect January 1. The group says the $300 per day penalty should be increased. 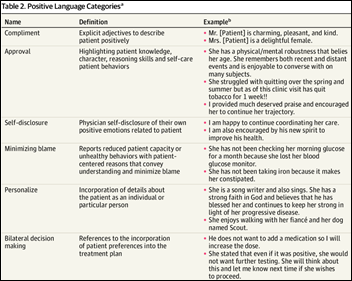 A JAMA Network Open article suggests that physicians avoid the use of “stigmatizing language” in their notes since patients may see them. The authors suggest avoiding language that questions patient credibility, indicates disapproval, stereotypes race or social class, indicates that the patient is difficult, or that conveys a paternalistic tone. 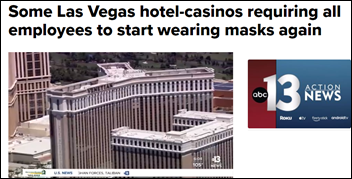 Three weeks before HIMSS21, the COVID-19 resurgence in Las Vegas causes the Venetian, Palazzo, and Sands to once again require their employees to wear masks, regardless of vaccination status. The health district is also recommending that everyone wear masks while indoors, advice that will surely be ignored by 99.5% of visitors. The Nevada Gaming Control Board has not re-imposed casino masking policies so far. The HIMSS21 “no masks required” policy remains aligned with CDC and county recommendations since all attendees must be vaccinated. COVID-19 case counts, positivity rates, and hospitalizations in Southern Nevada have returned to February levels, with 78% of those new cases being accounted for by Clark County. More than half of the state’s residents have not been fully vaccinated. The situation is so significant that the public health chief of Los Angeles has advised locals, especially those who are unvaccinated, to avoid travel to Las Vegas.