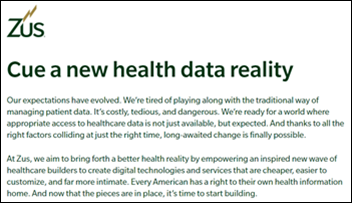 The company apparently abruptly changed its name from Zeus Health, which I noted a couple of weeks ago is already in use by a medical device investment company.

The press release explains that Zus is “pronounced Zoos like the father of Athena” although it declines to use the actual word “Zeus.”

Six of the company’s eight executives spent time at Athenahealth.

A lengthy Zus testimonial is provided by the CTO of Firefly Health, whose executive chairman is Jonathan Bush.

From End Gamer: “Re: Cerner. I think we ex-Cerner executives have a fair bit of insight due to our deep network and rapid information exchange. The company’s first failure was the drag on leadership when Neal was sick – an interim CEO should have been named within six months. In the subsequent CEO search, at least two candidates turned the job down before Brent arrived. The Board absolutely dropped the ball here. As to the future, I don’t think it matters who gets the job. The ship has taken on too much water and Epic is beating the daylights out of Cerner in the US (and soon overseas). The all-in bet on Federal programs has committed Cerner’s IP org to the detriment of the client base. I would expect that someone that wants to get big in healthcare could buy the company, but regardless, the Cerner that we were part of is gone, as are its traditions, its passion, and its potential.” I would opine that one thing that Cerner did right with Brent’s hiring was attempting to diversify into new areas – such as data sales and new federal business – in recognizing that the Epic juggernaut was going to be hard to stop, especially as Cerner was losing clients because of its revenue cycle fumbling. I haven’t seen product line revenue and contribution breakouts, so I don’t know if Cerner is still mostly an EHR vendor or its growth has significantly shifted to areas where Epic doesn’t compete.

HIStalk sponsors who are exhibiting at or attending HIMSS21 – tell me about your participation by July 23 and I’ll include your company in my HIMSS guide.

June 24 (Thursday) 2 ET: “Peer-to-Peer Panel: Creating a Better Healthcare Experience in the Post-Pandemic Era.” Sponsor: Avtex. Presenters: Mike Pietig, VP of healthcare, Avtex; Matt Durski, director of healthcare patient and member experience, Avtex; Patrick Tuttle, COO, Delta Dental of Kansas; Chad Thorpe, care ambassador, DispatchHealth. The live panel will review the findings of a May 2021 survey about which factors are most important to patients and members who are interacting with healthcare organizations. The panel will provide actionable strategies to improve patient and member engagement and retention, recover revenue, and implement solutions that reduce friction across multiple channels to prioritize care and outreach.

June 30 (Wednesday) 1 ET. “From quantity to quality: The new frontier for clinical data.” Sponsor: Intelligent Medical Objects. Presenters: Dale Sanders, chief strategy officer, IMO; John Lee, MD, CMIO, Allegheny Health Network. EHRs generate more healthcare data than ever, but that data is of low quality for secondary uses such as population health, precision medicine, and pandemic management, and its collection burdens clinicians as data entry clerks. The presenters will review ways to reduce clinician EHR burden; describe the importance of standardized, harmonious data; suggest why quality measures strategy needs to be changed; and make the case that clinical data collection as a whole should be re-evaluated.

The Wall Street Journal says that Apple’s health ambitions mostly haven’t panned out, although the article’s sources don’t seem solid. Apple planned to develop its own primary care service that would be powered by wearables data, but has since returned to its focus on selling hardware, particularly the Apple Watch. Insiders question the quality of the data generated by its clinics to guide product development, including the HealthHabit health coaching app, which has delivered poor user engagement among Apple employer testers. Company executives say data shows that HealthHabit improves blood pressure in 91% of its hypertensive users, while competing programs Hello Heart and Livongo deliver in the 30% improvement range, leading insiders to worry that Apple’s results are being overstated based on faulty data.

Google Health reportedly reduces headcount by at least 20% in a reorganization in which 170 employees have been moved to the Fitbit and Search product teams.

KHN reports that publicly traded hospital chain HCA is turning many of its hospitals into trauma centers, taking advantage of the ability to bill ED patients an “activation fees” of up to $50,000 each time the trauma team is assembled, sometimes when a routine ED visit is all that was needed. One man’s arm gash was billed at $52,000 instead of a reasonable $3,500. HCA’s activation fee in Idaho is $29,000 versus the state average non-HCA activation charge of $2,500.

People who received COVID-19 vaccine from Walmart or Sam’s Club will be provided with a digital copy of their record using Health Pass by Clear. 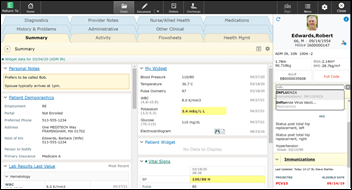 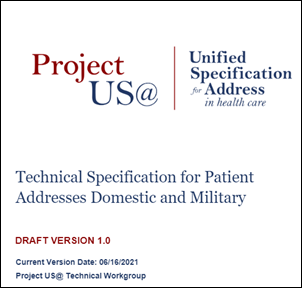 ONC publishes the Version 1.0 draft of the Project US@ Technical Specification, which hopes to create a unified specification for patient addresses that can also support patient record matching. The comment period will open soon. It is a surprisingly complex issue given the country’s language diversity, the imprecision of some addresses outside of urban areas, and the need to accommodate the different standards of Puerto Rico and the military.

As just about everybody predicted, hospitals are declining to publish their insurer-negotiated prices as required by a federal law that took effect January 1, instead opting to pay the paltry $300 per day fine for failing to do so. Whoever came up with that fine amount must not have ever looked at a health system’s revenue.

An AMA Board of Trustees report finds that the top five EHRs don’t display drug ads, but it warns that such advertising should not be allowed at all in EHRs and electronic prescribing systems, citing abuses by Allscripts-owned Practice Fusion. The AMA House of Delegates changed its policy to require direct-to-prescriber EHR advertising to comply wiith AMA’s direct-to-consumer advertising guidelines. The policy also prohibits displaying brand name products first in drug lookups and encourages displaying the generic product first.