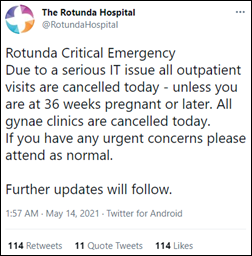 Ireland’s health service shuts down its IT systems due to ransomware, with several hospitals cancelling appointments and elective surgeries.

The government says it will not pay the demanded ransom, which some sources say is $150,000 but others report seeing locked screens that gave the amount at $20 million.

The attack involved Conti ransomware, in which attackers send an employee an email that looks like it came from a trusted colleague and contains a link to a Google Drive document that contains the payload.

From Pipeline Fretter: “Re: ransomware. Can you ask readers what they have done lately in response to healthcare ransomware threats?” Here’s a one-question survey. Please complete and I’ll compile the results.

Brent Shafer gets a weighted average grade of C- from respondents for his time at Cerner.

New poll to your right or here: How do you expect your employer’s headcount to change between now and 12/31/21?

SOC Telemed reports Q1 results: revenue flat, with an adjusted loss of $4.6 million versus $2.7 million, beating revenue expectations but falling short on earnings. Shares in the acute care telemedicine vendor are down 26% since they began trading in November 2020 in a SPAC merger, valuing the company at $700 million.

Bloomberg Businessweek says that billionaire “SPAC king” Chamath Palihapitiya is raking in the cash even as the SPAC market is cooling off and investors are losing big chunks of money. The article describes his involvement with Clover Health, a small, money-losing insurance company that tries to dazzle investors with its technology:

CDC reports that 56% of eligible Americans have received at least one dose of COVID-19 vaccine and 44% are fully vaccinated. An astonishing 158 million people have been given at least one shot. 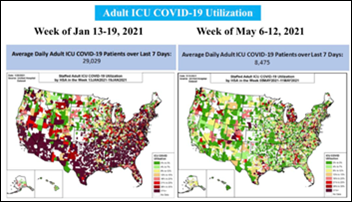 Here’s what a vaccine can accomplish in four months.

Experts say the eight-player COVID-19 outbreak among the New York Yankees is evidence that the vaccine works since seven of them had no symptoms and nobody got sick. They remind the public that while vaccines aren’t quite 100% protective against infection, they are nearly 100% effective against hospitalization and death. The article notes that most or all of the players would likely not have known they were infected except for the regular testing that pro sports requires.