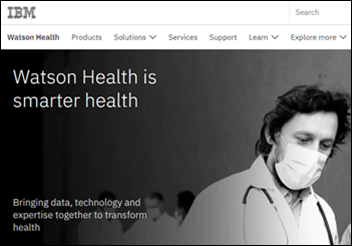 The grab bag of acquired businesses that may be sold off to private equity or in one or more SPAC mergers include Merge Healthcare, Phytel, and Truven Health Analytics. IBM spent billions on the acquisitions that one of its former executives called a “bet the ranch” move that followed Watson’s game show win on “Jeopardy!”

IBM’s new CEO hopes to catch up to rivals in cloud computing after IBM paid $34 billion to acquire Red Hat in mid-2019. 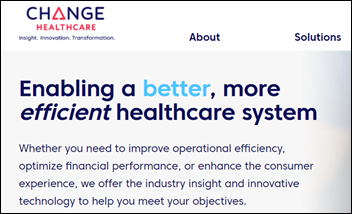 From Jeff: “Re: Change Healthcare acquisition by UHG/OptumInsight. Ronald Hirsch, MD of R1 RCM says consensus is that UHG will modify the criteria to their advantage, resulting in fewer patients meeting criteria for inpatient admission and therefore being held in an outpatient observation status.”

From GeddyAlexNeil: “Re: Change Healthcare acquisition by UHG/OptumInsight. I’ve worked at Optum, McKesson, and GE. This combination seems either brilliant or a total mismatch. In the Bill Miller era when I worked there, Optum was generally pretty good in their acquisition hit rate (Catarmaran, Alere, Humedica, and MedExpress). There’s also been some that at the time were well thought out, but the market shifted and/or they miscalculated (Picis). My opinion was they they have a thoughtful approach and historically done a good job integrating the new company into the fold, unlike McKesson. New leadership is here, however. Change is a behemoth saddled with the likes of HealthQuest (yes, it is still around at Emory and AU Medical Center), but first and foremost, it is almost impossible to send a claim today that doesn’t travel through the Change clearinghouse at some point. There has to be value that Optum sees in owning the EDI infrastructure that is Change. The Optum as we know it today was built on the back of the clinical services in the fringe (homecare, urgent care) and the PBM business. This was Ingenix, the code book company and the company whose electronic version of codes were built under the hood of every EMR/PM system in the country before it was Optum. Above all else, Optum is the sister company of one of the top payers that providers love to hate. And if I’m not mistaken, Optum is now larger than its insurer sister by several billion. Optum also represents a disproportionally large percentage of UHS quarterly earnings.”

From The Nazz: “Re: apps are dead. I would say at least that modern web technology makes possible to deliver the same functionality via a web page.” I’ve ditched other apps than the Washington Post one. Accuweather inexplicably decided to make its app landscape mode only on the IPad, so I replaced it with The Weather Channel but really don’t need either. I use Amazon’s website over the app at times since the IPad app won’t let you buy Kindle books. I like the Kindle app for reading books, the Walmart app for online grocery ordering, Waze for driving, and the Sonos app for playing music literally every day, but it’s a bunch of seldom-used icons after those. I think people are right that patients don’t need or want specific apps – MyChart is amazing on the browser and I’m fine with the Walgreens web page instead of their app. All I need is password management and rarely speech recognition and IOS provides those (LastPass is great on the desktop, but speech recognition isn’t as convenient there).

External electronic records weren’t reviewed in just over half the most recent encounters of poll respondents, although they would not have been useful in about two-thirds of those visits anyway.

New poll to your right or here: Which of your local care providers has earned your most positive brand perception? How that brand perception was created – by experience or otherwise – is up to you, as is the distinction among types of services offered. It would probably be the hospital-owned practices for me even though I’m happy with my direct primary care physician as well — it’s just that the former has spent a lot more energy and money to create a brand image than my one-woman physician practice.

Business Insider reports that Walmart has changed its 2018 plan to spend $3 billion to open 4,000 clinics by 2029, with new company teams now focusing on e-commerce as it has opened just 20 clinics in more of an experiment than a commitment.

Just-formed, Columbus-based Medicaid Managed Care insurer Circulo raises $50 million in funding and announces that it will use software from Olive and share its CEO Sean Lane. 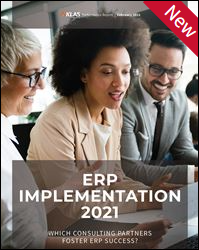 A KLAS review of ERP implementation firms finds that among software vendors, Workday offers strong software knowledge but falls short on guidance, while Infor’s improvements have significantly improved the client experience. The large number of recent Workday implementations has led to shortage of experienced resources across all firms, including Workday itself. Among consulting firms, Accenture and Huron stand out, while Deloitte and KPMG get mixed reviews from customers. Less-complex implementations are managed well by Avaap, Bails, and ROI Healthcare Solutions, while Chartis Group and Impact Advisors are newer to ERP work but are showing early success. Healthcare IT Leaders earns the highest score of ERP staffing firms.

US COVID-19 deaths will cross the 500,000 mark early this week. All major metrics are sharply down. The count of hospitalized patients dropped below 59,000, about the same as at the worst point in the spring and summer surges.

Researchers find from re-examining  originally submitted FDA vaccine data that both the Pfizer and Moderna products have first-dose efficacy of 92%, suggesting that the best use of the available vaccine supply would be to get first doses into as many people as possible, then worry about second doses later, to cut the time to reach herd immunity in half.

New research published in The Lance finds that the Oxford / AstraZeneca COVID-19 vaccine is more effective when the second dose is given 12 or more weeks after the first dose versus the usual four weeks.

Israel rolls out its “green passport” program in which gyms, theaters, hotels, concert halls, and synagogues will partially reopen only to people who have either been vaccinated for COVID-19 or who have recovered from previous infection and thus are not eligible to receive the vaccine. People can download the Health Ministry’s app, then create passport certificate with a QR code. The data sources will apparently be the Health Ministry’s vaccination records and treatment records from the country’s HMOs.

A nine-month follow-up study of COVID-19 patients, most of them with mild disease, finds that 30% had persistent symptoms, most commonly fatigue and loss of sense of smell or taste.

CDC Director Rochelle Walensky, MD, MPH says that schools can safely open regardless of the degree of community spread of coronavirus as long as they require masks and distancing among students and staff.

An AMIA study finds that its 2009 policy meeting underestimated the degree of EHR-caused burnout while overestimating the impact of HITECH-powered identify theft and fraud alerting. Most of the recommendations from that meeting have resulted in little, if any, action.