Enli’s roots go back to 2001 as Kryptiq, which then worked with Providence Health & Services to commercialize the latter’s CareManager starting in 2016. Kryptiq acquired CareManager in 2012 and was then itself acquired by Surescripts the same year, and Surescripts spun off Kryptiq in 2015 as Enli.

From Peony Picker: “Re: Haven. Why do you think it failed?” We don’t know much about the company’s mission, priorities, and plans, but  here’s my armchair quarterback opinion:

From Rants On Fire: “Re: grammar. It’s like wearing masks — you do it for others.” Actually, it’s like masks in that correct use benefits both parties. Many in the anti-mask cohort are perceived rightly or wrongly as lacking intellectual ability, possessing little empathy for others whom they could protect with the tiniest of efforts, and choosing a puzzling platform to convince themselves of their illusory autonomy. Taking the extra time to communicate clearly within the broadest rules of the road is the same — you look smarter, it shows that you value your own message, and it demonstrates that you’ve found meaningful ways to display your rugged individualism beyond exhibiting sloppiness and defying anyone to criticize you for it. Most of us are knowledge workers in which rewards seldom accrue to those who appear lazy, ill-informed, or selfish.

January 13 (Wednesday) 2 ET. “The One Communication Strategy Clinicians Need Now.” Sponsor: PerfectServe. Presenters: Clay Callison, MD, CMIO, University of Tennessee Medical Center; Nicholas E. Perkins, DO, MS, hospitalist and physician informaticist, Prisma Health. Healthcare organizations are leveraging their current investments and reducing their vendor footprint, so there’s no room for clutter in healthcare communication. The presenters will describe the one communication strategy that clinicians and organizations need today, how to improve patient experience and protect revenue, and how to drive the communication efficiency of clinical teams. 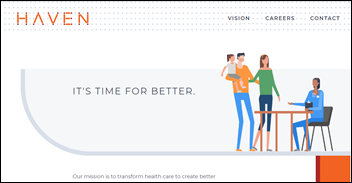 Haven, which launched in 2018 with the goal of improving healthcare costs and outcomes for employers, notifies its 57 employees that it will shut down by the end of February. The joint venture among Amazon, JPMorgan, and Berkshire Hathaway started losing executives in 2019 with the departure of COO Jack Stoddard, followed by high-profile CEO Atul Gawande, MD last May, Head of Measurement Dana Safran in July, and CTO Serkan Kutan in September. Analysts believe the company’s efforts to improve care access, insurance benefits, and prescription prices were stymied by separate, employee-focused projects that were being conducted by its founding members. 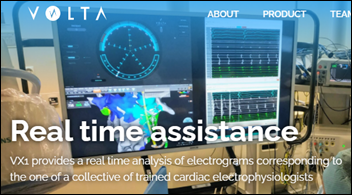 France-based Volta Medical, which has released AI-powered arrhythmia management software and is working on software to improve the first-procedure accuracy of ablation surgery for atrial fibrillation, raises $28 million. President and co-founder Julien Seitz is an interventional cardiologist at Saint Joseph Hospital in Marseille.

Ken Levitan, who served as CIO of Einstein Healthcare Network for 10 years through 2015 and is now EVP/CAO, is named as its interim president and CEO. 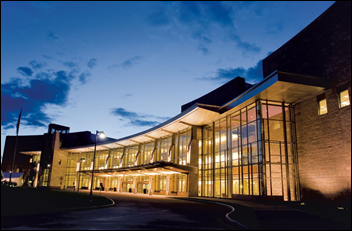 The University of Vermont Health Network pushes back the second and third phases of its Epic implementation, citing the need to focus its resources on COVID-19 response efforts and continuing recovery from an October ransomware attack.

Monday saw another record day of COVID-19 hospital inpatients at 128,210. 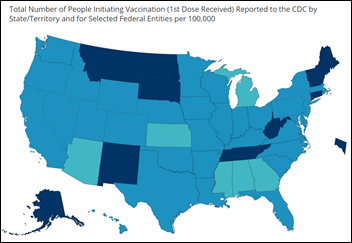 CDC’s data tracker says that 15.4 million coronavirus vaccine doses have been distributed and 4.6 million administered, both falling far short of projections. The states with the lowest percentage of people injected are Michigan, Arizona, Kansas, Mississippi, Alabama, and Georgia.

FDA declines to adjust its approved COVID-19 vaccination regimen to speed up rollout by stretching the interval between doses, giving lower doses, or mixing and matching products, warning that such use has not been studied for effectiveness and may place the public at risk. FDA also warns that studies didn’t continue following participants who failed to get the second shot  in the designated time, so assessment of one-shot effectiveness is not possible without additional studies.

Meanwhile, a just-published analysis (not a preprint) in Annals of Internal Medicine finds that the best use of the limited supply of vaccines would be to vaccinate more people initially — using most of the available initial supply and production for the first three weeks instead of holding back half for second doses as is being done today —  then holding more vaccine for follow-up injections.

Los Angeles County orders ambulance crews to not transport patients with low survival odds and to conserve oxygen for the most critical patients. Ambulances are waiting up to eight hours before they’re allowed to take their patients into the ED.

New UK research finds that family members who are under 17 are more likely to bring coronavirus into the household than adults and those aged 12-16 are seven times as likely as adults to be the household’s first case. Data consistently indicates that coronavirus transmission is lower when schools are closed.

COVID frontline primary care doctors who aren’t affiliated with hospitals have no access to COVID-19 vaccine, with most of those surveyed saying they don’t even know where they will get the vaccine. Most states seemed to have forgotten that not all doctors work for hospitals, whose highest priority is vaccinating their own employees and those doctors who generate the most revenue.

States that were somehow caught off guard by the release of COVID-19 vaccines and don’t have online appointment systems for signups are instead using free party RSVP sites such as Eventbrite and SignUpGenius. Others are using sign-up sites that are crashing under heavy volumes and some are simply telling people to join long lines and hope that the shots don’t run out.

ED residents are finding few available jobs upon completion of their programs, as COVID-lowered ED volumes caused hospitals to stop recruiting ED doctors. More than half of US ED doctors work for investor-owned staffing companies that have been more aggressive in cutting back staffing. Some of the residents are doubling down on emergency medicine by signing up for low-paying fellowships.

Private equity-owned medical practices — many of them in dermatology, gastroenterology, and obstetrics — are requiring patients to sign binding arbitration agreements to prevent them from filing medical malpractice lawsuits.