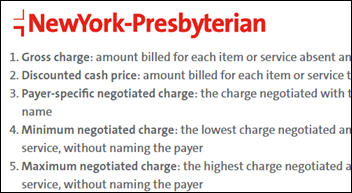 Hospitals were required to publicly post their negotiation insurer rates and list of shoppable services on January 1, so I checked websites of the country’s five largest health systems.

Issues: (a) the lists aren’t necessarily easy to find; (b) they involve huge downloads; and (c) they aren’t really worth much to consumers who don’t have a choice or who wouldn’t understand what they are looking at.

It’s still a federal requirement, though, so here’s what I found:

From Ragged Glory: “Re: LRGHealthcare. Something is fishy about the bankrupt system saying it is spending 9% of annual revenue on Cerner. I suspect that’s posturing for the public and for the bankruptcy court. The system’s annual report suggests that Cerner costs are less than 1% of reported gross revenue and 2% of net revenue. Clearly they are using creative math to pressure Cerner to lower the costs and trying to blame others for their own decision-making, perhaps also hoping the bankruptcy judge will make Cerner lower their fees.” I agree that the number seems suspicious. The health system’s interim budget, as filed with the bankruptcy court, projects $11 million in income for January 2021 and a Cerner expense of $131,000, which is just over 1% of the total (and a much smaller percentage of its revenue for the salad days of 2019). The health system blames its financial woes on incompetent prior leadership that made bad strategic decisions and piled up debt, so either they were tardy in parting ways with underperforming executives or they’re just trying to protect their own future employability.

From Talk Talk: “Re: interviews. I would like to see more provider interviews.” So would I, but it’s tough to find interesting folks who can spare the time and who have their employer’s permission to be quoted. In their absence, I interview CEOs, mostly those of Platinum-level sponsors since I like to learn more about them, but sometimes CEOs of other companies provided that their LinkedIn interests me enough to want to spend the time with them. I look for deep industry experience, a sense of humor, and non-healthcare accomplishments, with bonus points for weird former jobs, military service, or notable volunteer work. My interviews mostly cover non-company topics, so interviewees need to be interesting on their own beyond their job title.

The most recent medical encounter reported by poll respondents was usually an in-person visit, during which the physician most often wore a white coat, while most video visit doctors wore street clothes. Folks who haven’t worked in hospitals would be surprised at the clinician caste couture, where rules that may or may not be spelled out explicitly dictate the style and length of lab coat, the presence of reference materials and tools in the brimming pockets of residents and their absence in those of attendings, and in many cases of a medical inferiority complex, the prominent draping of a stethoscope that hasn’t been used in decades over a crisply pressed white coat, often brandished by doctors whose specialty is non-clinical or whose education was extraterritorial.

New poll to your right or here: How is your health now compared to a year ago?

I’m feeling the loss, maybe in a good way, of a post-New Year’s Day without having the HIMSS conference suddenly looming. Monday would usually commence the Super Bowl-like madhouse that reaches its crescendo with the opening keynote, but I don’t know what to expect this year. I’m not even feeling inspired to do the HISsies awards.

Thanks to the following companies for supporting HIStalk. Click a logo for more information.

A generous donation from reader Natalie, with matching funds from my Anonymous Vendor Executive and other sources applied, fully funded these Donors Choose teacher grant requests: 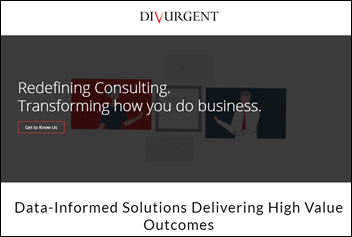 Welcome to new HIStalk Platinum Sponsor Divurgent. The Virginia Beach, VA-based company has for 13 years helped its clients improve operational effectiveness, financial performance, and customer experience by using data-infused, flexible, and scalable solutions that demonstrate and quantify value. Specific offerings include implementation and support, technology and infrastructure, data engagement and process improvement, IT security and strategy, and customer management. The company is privately owned and self-funded, which allows it to make the best decisions for clients rather than shareholders. The company received A grades in all customer experience pillars  in KLAS’s 2020 report on implementation leadership and 100% “would buy again.” It was also recently named as #3 on Modern Healthcare’s “Best Places to Work in Healthcare” for 2020. Thanks to Divurgent for supporting HIStalk.

Listening: Metallica rocking “Enter Sandman” in front of 1.6 million concertgoers live in Moscow in 1991 as the Soviet Union was sagging with its last breath into history’s ash heap, with Red Army soldiers in uniform among the endless throngs of people who were cheering four thoroughly American headbangers whose miles-long view to the horizon was nothing but moshing Soviets.

US COVID-19 deaths are approaching 350,000 as the case count passes 20 million, both representing around 25% of the global total. Hospitals reported housing a record 125,544 COVID-19 inpatients on Sunday, even with seven states failing to report any data at all and another seven states not reporting hospitalizations.

CDC reports indicate that poorly planned and executed logistics are hampering COVID-19 vaccination as they did distribution of PPE and tests, with just 12.4 million doses distributed and only 2.8 million of those administered even though the December vaccine release was expected for months and the easiest-to-reach populations—captive nursing home residents and hospital workers – are going first. Reaching herd immunity will take 10 years at that rate. The logjam also raises the question of whether hospitals have the urgency, efficiency, and excess capacity to lead vaccination efforts.

The UK will allow “mix and match” use of two different COVID-19 vaccines for the two-shot regimen if someone’s first injection is not known or the product isn’t available, a practice that has not been studied and that is therefore of unknown effectiveness. A US vaccine expert says that British officials have abandoned science and “are just trying to guess their way out of a mess.”

Eighty percent of the COVID-19 antibody doses that the federal government sent to hospitals are sitting on the shelf, as some hospitals decline their allotments and others are too busy to offer the outpatient treatments. Experts feared that after President Trump was given the drug and touted it that demand would far outstrip supply, but effectiveness data is nearly non-existent and many doctors question its value.

A London infectious disease modeler warns of the exponential risk of mutated coronavirus strains that are more infectious. A typical city in Europe would see COVID-19 deaths rise from 129 per month to 193 if the fatality rate were to jump 50%, but that same 50% increase in transmissibility would cause 978 deaths. It would be much worse in the US unless the B117 variant turns out to be rare here, making increased mitigation measures and rapid vaccination as critical as they are unlikely. 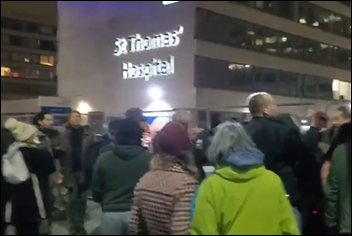 In England, Royal London Hospital warns that it can no longer provide high-standard critical care, as it is overwhelmed by COVID-19 patients and ambulances line up outside with more. Meanwhile, the city’s St. Thomas’s Hospital is surrounded by maskless New Year’s Eve revelers chanting “COVID is a hoax.”

State and local jails and prisons are closing and transferring inmates elsewhere as COVID-19 leaves too few healthy guards to staff them, with experts warning that transferring residents increases outbreaks, as does overcrowding. Nearly 100,000 correctional officers have tested positive for COVID-19 and 170 have died.

Officials of the Parker, Colorado Republican party post the names and home addresses of local public health employees in its “Revolt Against Shutdowns” efforts, warning the employees that “patriots are going to show you the error of your ways” and “we’ll see how strong they are at their homes.”

The West Virginia National Guard, which was running a vaccination clinic at a county health department, injects 42 people with antibody treatment instead of Moderna’s vaccine.

Maricopa County, AZ blames vaccine rollout delays on the state’s vaccine management system, which it says didn’t email people to schedule their vaccination appointments, sent them to sites outside the county, has no text messaging option, locked people out who tried to use their Cox email address, and failed to show certain locations. The state says its system works but had an interoperability problem with the county’s pre-screening tool and the statewide system, also noting that Banner Health and Honor Health decided to use their own systems instead of the state system.

An employee of Kaiser Permanente San Jose Medical Center who wore an inflatable costume on Christmas to cheer up patients is believed to have created an outbreak in which 43 ED employees have tested positive.

Another bit of Internet history goes away, as Adobe disables any remaining installations of its long-retired, always-updating Flash browser plug-in.

I dunno, HIMSS – these don’t sound like “open-source initiatives” to me.