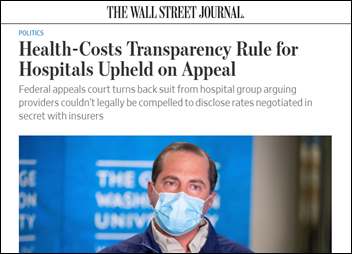 The court rejected a lawsuit that was brought by the American Hospital Association to keep hospital-insurer negotiated rates secret. 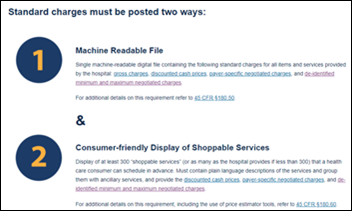 Hospitals must post their standard charges on a public-facing website, both as a machine-readable file of all hospital charges and a consumer-friendly display of 300 “shoppable services.” Both must include the discounted cash price, payer-specific negotiated charges, and de-identified minimum and maximum negotiated charges.

HHS says it will monitor and enforce the requirements starting Friday, and non-compliant hospitals can be issued a warning notice, required to develop a corrective action plan, or have a civil monetary penalty imposed. 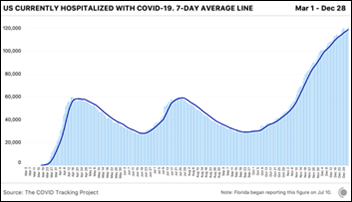 US hospitals reported 124,696 COVID-19 inpatients on Tuesday, another record high. 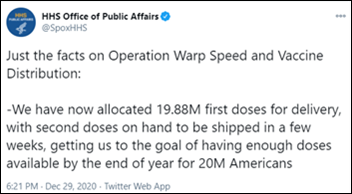 CDC reports that 2.1 million Americans have received their first of two COVID-19 vaccine shots, far short of Operation Warp Speed’s goal of 20 million vaccinated citizens by December 31. California was allocated 1.7 million doses, of which it has received 438,000 and administered just 70,000. HHS Secretary Alex Azar said in October that 100 million doses would be available by December 31, but the actual number is at 11.5 million. States have received minimal money and help from the federal government to address the “last mile” of getting injections into arms, and some state health departments see their role as making sure hospitals and clinics get vaccine doses and figure out on their own how to get them administered. HHS disputed the vaccination numbers in a tweet storm Tuesday following exasperated tweets from Ashish Jha, MD, MPH, dean of Brown School of Public Health, saying that data reporting is lagging and that it will ship 20 million first doses by Friday and hold another 20 million for the second round of injections.

Hospitals in England report record hospitalizations even with aggressive mitigation measures in place, as a more contagious coronavirus variant has also pushed case counts to record levels. The first known US case of the mutated virus was discovered Tuesday in Colorado.

Russia admits that 186,000 of its citizens have died of COVID-19, triple the number that has been officially reported, based on excessive death counts. The country has been criticized for counting only deaths in which an autopsy confirms that the virus was the main cause. The new estimate places Russia behind only the US (335,000) and Brazil (192,000) in coronavirus deaths.

TSA screened 1.3 million air travelers on Sunday, the highest count since the pandemic began and the sixth day in the past 10 that traveler volume exceeded 1 million.

Five LA-area hospitals declare internal disasters, including implementing patient diversion, due to overloaded patient room oxygen pipes that are pumping the high volumes – up to 10 times the normal flow – that COVID-19 patients require.

The Atlantic interviews 30 experts about how the pandemic’s second year could play out in 2021:

Advocate Aurora Health throws out 500 doses of COVID-19 vaccine after an employee removes it from the pharmacy refrigerator to get something else, then forgets to put it back within the allowed 12-hour post-refrigeration window. Meanwhile, eight home care workers in Germany are given entire vials of five vaccine doses as a single shot due to human error. 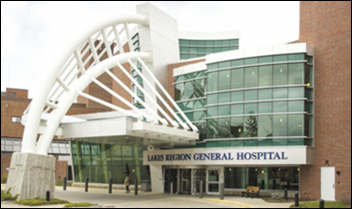 Concord Hospital (NH) will acquire bankrupt two-hospital LRGHealthcare (NH) for $30 million. LRGHealthcare blames its financial woes on excessive investment in inpatient services as demand was shifting to outpatient as well as its “massively expensive” EHR, on which it was spending 9% of total organizational revenue each year to run its two hospitals that have a combined 162 licensed beds. The Concord paper reports that LRGH runs Cerner, paying $342,000 per month as its 75% share in a services agreement with Speare Memorial Hospital. Concord Hospital also runs Cerner.