CMS announces a rule that requires Medicaid managed care and insurers that sell products on the Exchanges to facilitate the exchange of patient data between payers.

The rule would require payers to create a FHIR-based API so that providers can determine the documentation that a particular insurer requires and also manage their prior authorization requests.

The PA requirement also requires insurers to respond more quickly, to provide specific reasons for any denial, and to publish metrics to show how many procedures they are authorizing and denying.

From Award Cleaver: “Re: Most Wired and HIMSS EMRAM. You haven’t been posting the winners, like us.” I’m skeptical of “awards” that lazily measure tools rather than results in hopes of milking sales of those tools to the benefit of the awarder. The ultimate award is improving quality and lowering cost, and if you can do that with index cards instead of AI, then good for you even if that won’t win you an IT cheerleader’s award. I hire a plumber because their reviews say they do good work at a fair price, not because they bought a cool IPad for creating estimates.

From Bias Boy: “Re: healthcare bias. Doesn’t that exist when solutions like contact tracing assume that people have cell phones?” Yes, and many other technology biases are inadvertently created by privileged developers who can’t conceive of people who don’t have cell phones, who use Android instead of Apple, who don’t have access to broadband, or who have physical or cognitive limitations that limit their technology use. However, the notion of “equity” in any form, including and perhaps especially health, is a goal that sometimes can’t be quickly met in trying to advance the majority.

Most poll respondents grade their preferred local hospital well in being patient-friendly, trustworthy, and effective.

New poll to your right or here: How important is your job in your overall life? 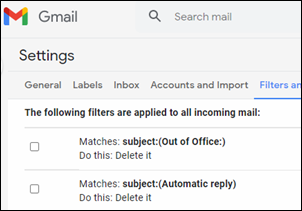 I was searching my Gmail account every day for an important email that I was expecting, worried it would go to spam and get missed, when I thought of a two-minute solution – I set up a Gmail forwarding address to my cell carrier’s text messaging service (which is in the form of phonenumber@txt.att.net for ATT or phonenumber@vtext.com for Verizon), created a Gmail filter to look for the particular word or sender I was expecting, then set the filter to forward a copy of those emails to the texting address. Result: those important emails will send an immediate text message to my phone.

Listening: Octavision, shockingly precise prog metal rock (even more note-for-note perfect than Rush) that features guitarist Hovak Alaverdyan and one of the world’s best bassists in Victor Wooten, a five-time Grammy winner and founding member of Bela Fleck and the Flecktones. Their new album sounds good if you like their sort of music as I do. 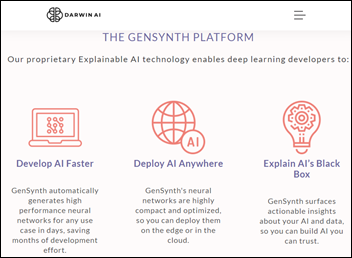 DarwinAI and Red Hat work with Boston Children’s Hospital to develop a deep neural network chest X-ray AI tool for COVID-19 diagnosis, notable in that it (a) employs “explainable” algorithms instead of being deployed as an opaque and potentially unreliable black box, and (b) has been released as open source.

Thailand’s universal healthcare program will require Bangkok-area patients to present a smart ID cart to receive services, which will help prevent fraud in verifying that patients are covered and to allow their medical records to be shared among providers. 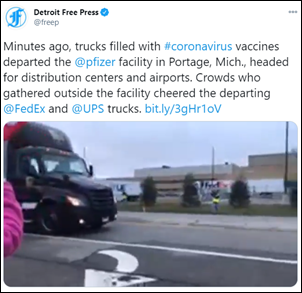 Shipments of Pfizer’s COVID-19 vaccine began early Sunday following Friday’s FDA Emergency Use Authorization, moving the focus from science to the unprecedented logistical and marketing challenge of getting doses delivered and administered. 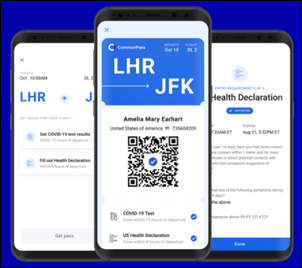 Major airlines will soon roll out apps to check the COVID-19 test and vaccination status of passengers, likely followed by employers, college campuses, sports venues, and cruise ships. CommonPass, developed by the non-profit Commons Project, was quickly developed to check the negative test result status of truckers in Africa and is being tested by airlines to guide passengers to testing locations and then verify the resulting confirmation code.

In Sweden, 500 specialty nurses are quitting each month even as ICU beds fill, with hospitals in Stockholm asking for military help and moving pediatric nurses to cover ICUs. Nurse there cite low pay and a lack of time off as their reason for leaving.

Another group of scientists questions the “hygiene theater” of businesses that are spending big money to perform deep-cleaning even though zero COVID-19 cases have been documented from surface spread. They remind that shared air, not shared surfaces, is the problem.