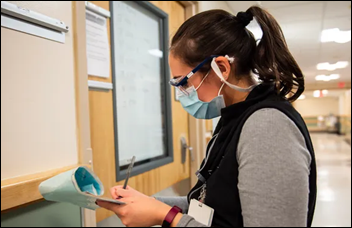 University of Vermont Health Network restores access to Epic at all locations nearly a month after malware took its systems down and forced recordkeeping back to paper. 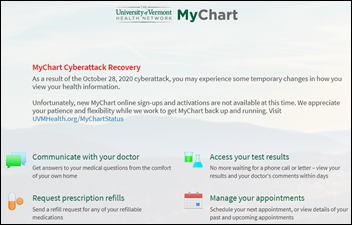 Epic MyChart was brought back online Friday, although new signups are not yet allowed and some test results will be presented as scanned documents. EpicCare Link was also restored, which gives community providers read-only access to the information of shared patients.

The health system says that bills, statements, and payment processing are delayed. Patient charges incurred since the October 28 downtime began have not been posted.

A New York Times article looks at the patient impact of the system downtime – cancer patients were sent away, staff used paper and their own memories to reconstruct chemotherapy protocols, and patients were not contacted to reschedule appointments for cancelled critical visits and imaging studies.

From WARN Actor: “Re: Providence Portland. Filed a WARN Act notice that it will lay off 183 employees in transitioning work to a third-party vendor. Wonder who the vendor is?” The affected positions all involve billing and coding and are located in the Portland Office Park. Christmastime layoffs always seem insensitive, but it sounds like almost all of those affected will be offered positions with the unnamed vendor.

Thanks to readers who anonymously shared their total company compensation for 2020. I’m not much of a money-motivated guy, so my only reaction is to hope that every reader has enough income and assets to climb past the bottom two levels of Maslow’s Hierarchy of Needs (physiological and safety) to move more importantly to the three higher ones (love/belonging, esteem, and self-actualization).

New poll to your right or here: Of which groups are you a member?

Reed Gardner, PhD, health informatics pioneer and professor emeritus of the biomedical informatics department of University of Utah, died last week at 83 of injuries he sustained in a fall. 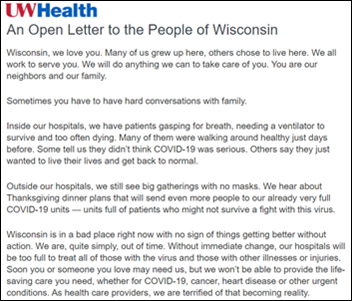 US hospitalizations for COVID-19 are at 92,000 as hospitals report a lack of beds and clinicians to staff them. The daily death count threatens to break its mid-April record as new cases approach 200,000 per day and lack of Thanksgiving precautions is likely to create a big upswing in the next two weeks.

State and local health officials are streamline or abandoning COVID-19 contact tracing efforts because while it would have been helpful in stemming outbreaks early in the pandemic, the virus is now spreading freely and there’s little to learn or gain when almost any group setting will include one or more infected people.

Stat reports that health systems are using AI to assign COVID-19 risk scores despite lack of proof that they correlate to real-world outcomes or that their training was broad enough to be generalizable. Stanford Health Care has developed its own model and is testing it against Epic’s free tool.

Anthony Fauci, MD says on a Sunday news program to “close the bars and keep the schools open,” noting that spread from and among children is not a significant issue.

In Brazil, the medical information of 16 million COVID-19 patients is exposed when a hospital employee uploads a worksheet containing login credentials to the country’s two coronavirus government databases to GitHub. The employee says he uploaded the file while working on a computer modeling project and forgot to take it back down.

Britain may begin mass COVID-19 vaccinations early this week as the country’s regulators are fast-tracking emergency approval of Pfizer’s product and potentially its homegrown AstraZeneca vaccine whose testing was flawed. The British government has pre-ordered 355 million doses of seven vaccine products. Its “Union unit” that fights UK breakup proposals, such as Scottish independence, is demanding that vials of the AstraZeneca vaccine bear the Union Jack, but Prime Minister Boris Johnson insists that nothing like that is being considered.

The mayor of Longmont, CO backs away from his plan to make it illegal for the city’s two hospitals or other healthcare providers to provide services to COVID-19 patients who live in a county or city whose government refuses to comply with the state’s emergency orders, such as Weld County. Weld County’s commissioners have said they will ignore the state department of health’s Level Red restrictions and will leave it up to residents to do whatever they think is best, also noting that the case numbers are rising despite previous mandates.

Sanford Health fires CEO Kelly Krabbenhoft following his email to employees in which he said he would not wear a mask because he believes himself to be immune following his coronavirus recovery.

All three quarterbacks of the Denver Broncos have been quarantined for five days following coronavirus exposure, forcing the team to start a wide receiver who last played quarterback in college. Meanwhile, the San Francisco 49ers are struggling to find alternatives for upcoming scheduled home games that won’t be allowed under new state restrictions. 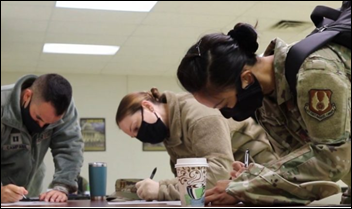 Sixty Air Force nurses spent Thanksgiving working at staff-stretched hospitals in North Dakota. Captain Ronald Golemboski, a nurse from the 96th Medical Group from Eglin Air Force Base who served multiple tours in Iraq and Afghanistan, summarizes, “It’s always hard. But as members of the Department of Defense, we’re tasked to fight all enemies, and that’s whoever and wherever they may be, including this virus.”

A technologist says that videogame publishers are moving away from publishing apps – and the control and revenue they cede to app store owners Google and Apple – and instead are using advanced browser functionality. Apps won over websites in the early days because they were superior, but increasingly sophisticated browser capabilities paired with cloud computing would allow developers to release a single product version that would work on any device without being beholden to app stores.

In India, a hospital turns in a medical resident for hiring a nurse to impersonate him in making his hospital rounds and signing his timesheets, where the imposter wore a face mask to avoid detection.

Practice Fusion founder and former CEO Ryan Howard pens an article titled “How to Prevent Your Company from Being Used for Evil From a Founder Who’s Been There,” making these points: