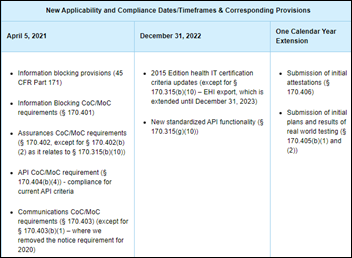 HHS and ONC extend compliance dates for the Cures Act information blocking provisions to April 5, 2021, while 2015 Edition health IT certification criteria updates and standard API functionality deadlines are moved out to December 31, 2022.

My least-favorite term lately is “patient leakage,” which elicits two unsavory visuals: (a) bodily fluids dribbling uncontrollably from health system customers, and (b) millionaire health system executives dragging patients by the scruffs of their necks back to the facilities that they hoped to avoid.

November 11 (Wednesday) 1 ET. “Beyond the Firewall: Securing Patients, Staff, and the Healthcare Internet of Things.” Sponsor: Alcatel-Lucent Enterprise. Presenter: Daniel Faurlin, head of network solutions for healthcare, Alcatel-Lucent Enterprise. The biggest cybersecurity risk for healthcare IoT isn’t the objects themselves, but rather the network door they can open. This webinar will address meeting the challenges of security, management, and monitoring using ALE’s Digital Age Networking, a single service platform for the network infrastructure that includes an autonomous network, onboarding and managing IoT, and creating business innovation with automated workflows. Specific use cases will be described, including COVID-19 quarantine management, locating equipment and people, and ensuring the security of patients.

November 16 (Monday) 1 ET. “COVID-19 and Beyond: A CISO’s Perspective for Staying Ahead of Threats.” Sponsor: Everbridge. Presenter: Sonia Arista, VP and global chief information security officer, Everbridge. While hospitals worldwide work to resume elective care amid COVID-19, they’re quickly adapting and responding to a variety of emerging risks that have tested their resilience, including a surge in cybersecurity and ransomware attacks. This webinar will highlight emerging IT vulnerabilities and best practices designed to help hospitals anticipate and quickly mitigate cybersecurity risks. A former hospital CISO will share her expertise in responding to high-impact IT incidents and mitigating risks during critical events given the “new normal” that COVID-19 has created.

November 18 (Wednesday) 1 ET. “Do You Really Have a Telehealth Program, Or Just Videoconferencing?” Sponsor: Mend Family. Presenters: J. D. McFarland, solutions architect, Mend Family; Nick Neral, national account executive, Mend Family.  Healthcare’s new competitive advantage is telehealth, of which a videoconferencing platform is just a small part. This presentation will describe a comprehensive patient journey in which an organization can acquire new patients, reduce check-in time, reduce no-shows, and increase patient satisfaction, all using virtual care. Health systems did a good job in quickly standing up virtual visits in response to COVID, but telehealth and the digital front door are here to stay and now is a good time to re-evaluate tools and processes that support patient scheduling, digital forms, telehealth, and patient engagement as part of a competitive strategy. 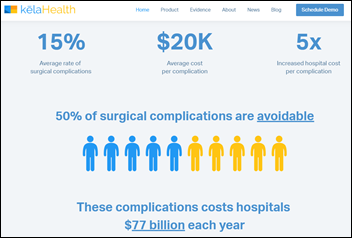 Surgery analytics vendor KelaHealth raises $12.9 million in combined seed and Series A financing. The company says its software improves surgical quality while preventing complications. It was formed by a group of Duke-affiliated surgeon-scientists, including founder and CEO Bora Chang, MD. 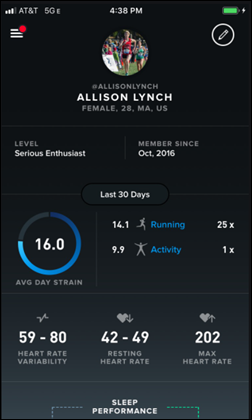 Fitness and sleep monitoring membership company Whoop raises $100 million in a Series E funding round that values the company at $1.2 billion. The $30 per month membership includes a simple monitoring strap (heart rate, sleep, and respiratory rate) and access to its analytics and community.

Long-time friend of HIStalk David B. Dillehunt is retiring as VP/CIO from FirstHealth of the Carolinas in Pinehurst, NC at the end of the year. He sent me a nice note about HIStalk that would be vain of me to post (but I appreciate it anyway), and he also mentioned that FirstHealth will do its own VP/CIO search without using a recruiter, so interested folks can apply on its website. An email search finds that Dave and I first exchanged messages in early 2006, so we go back a ways.

Optum’s annual health executive AI survey finds that 59% of them expect to see a payback period on investments in under three years and 95% think that hiring AI-experienced employees is a priority. The top three use cases identified are wearables monitoring, accelerating research, and assigning billing codes.

Ellkay launches its Women in HIT recognition interview series program, noting that while all of its own departments have more women than men, tech companies in general have just 25% women. Nominations are accepted online.

Epic says in an increasingly common press release that 190 health systems will go live this fall. 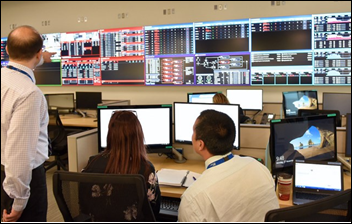 Tampa General Hospital says its use of GE’s command center has eliminated $40 million worth of inefficiencies, including decreasing length of stay and ED diversion that equate to 30 additional beds.

HHS releases its final Transparency in Coverage rule that requires health insurers to disclose their negotiated rates and patient out-of-pocket costs for 500 shoppable services for plan years that begin on or after January 1, 2023. They will also be required to show historical payments from and payments to out-of-network providers as well as negotiated prices for prescription drugs.

Aetna pays $1 million to settle three HIPAA breaches in 2017, one related to an online document display and the other two involving mailing envelope disclosures.

White House advisor Jared Kushner said in a recorded interview in April that President Trump was “getting the country back from doctors” in developing a strategy to push states to reopen for his political benefit, after which the White House would then blame state governors for any resulting coronavirus spread.

Politico reports that HHS spokesperson Michael Caputo, who is on medical leave, privately pitched its $300 million, pre-election  “defeat despair” coronavirus ad campaign as “Helping the President will Help the Country.” HHS declines to say whether the ad campaign will ever run, is accused by House Oversight leaders of not providing documents they requested, and said that HHS Secretary Alex Azar was not aware of Caputo’s direct involvement. The $300 million cost was taken from CDC’s budget. 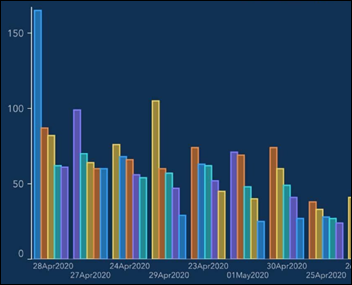 Atlanta magazine examines the botched rollout of Georgia’s coronavirus dashboard that left public health officials, local governments, businesses, and residents uncertain about how to comply with the governor’s push to reopen or to evaluate his wisdom in doing so. He assigned the dashboard’s development to to the state’s budget office instead of its public health department, where it was then outsourced to private contractor SAS. The state’s epidemiologists took the black eye for its lack of reliability and confusing presentation. National public health experts say it is unusual to let a third party contractor publish unvetted data to a state health department’s website. A much-Tweeted gaffe was a chart that appeared at first glance to show a steady decrease in case counts, but the X-axis case counts were sorted from greatest to least instead of by date.

Chicago’s NPR station looks at the lack of a central agency to coordinate COVID-19 patient transfers, with one small hospital that mostly treats low-income people of color being told by several hospitals that they had no available ICU beds despite having reported them empty to a state database. Some hospitals told the smaller one directly that they wouldn’t take a transfer if the patient had certain public-funded health insurance. The hospital was also rejected by the 3,000-bed field hospital that was built inside McCormick Place, which was mostly empty. The station notes that no state agency or public health official can force a hospital to accept a transfer and they have no incentive to cooperate with each other.

Science says that October was good for remdesivir manufacturer Gilead Sciences, which got an early look at WHO’s Solidarity trial results – which showed that remdesivir doesn’t decrease mortality or recovery time – before it signed a billion-dollar EU distribution deal and earned FDA’s approval even though FDA did not have its information reviewed as usual by its panel of outside experts. Gilead says it won’t renegotiate its $2,400 price following the Solidarity study’s disappointing findings about efficacy. Gilead got a look at the Solidarity study results on September 23, which FDA didn’t see until October 10 prior to its full approval on October 22. Gilead has sold $873 million worth of remdisivir (Veklury) so far this year.

The FBI warns that Russian ransomware hackers are targeting US health systems and have taken down four of them so far. A cybersecurity expert says that hackers are demanding more than $10 million per target and discussing plans to infect 400 hospitals and clinics. Another analyst reports that 59 US providers have been impacted so far in 2020, disrupting care in 510 facilities. St. Lawrence Health System (NY) went on diversion and back to paper documentation in three hospitals Tuesday following a ransomware attack, while University of Vermont Health Network reported a system-wide outage Thursday. Sky Lakes Medical Center (OR) also reported a ransomware attack Tuesday and remains down. The Cybersecurity & Infrastructure Security Agency has issued an advisory describing how Trickbot-deployed Ryuk ransomware works and offers the usual broad mitigation suggestions, most of them not easily implemented quickly (although applying US updates, reviewing RDP ports, auditing user accounts with administrative privileges, backing up systems and storing the copies offline, and auto-updating antivirus software should be done regularly anyway). 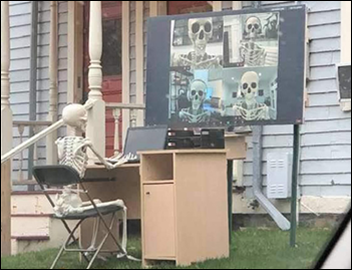 I’m intrigued by posed skeleton displays in yards for Halloween. This Zoom call one best represents 2020, although I also like the cleverly topical ones in which an evil skeleton flings lurid coronavirus balls at others who are desperately fleeing while wearing masks. 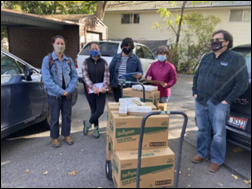