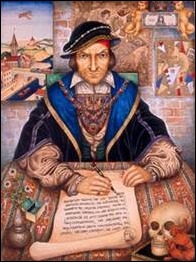 Mr. H posted a poll yesterday looking to better understand when patients / readers have most recently encountered a scribe and in what context. Having spent the better part of more than a decade working with scribes in various different capacities, I thought I would chime in with my experiences.

I had my first encounter with the idea of scribes in 2006 when I was working on my first large-scale EHR go-live. We had a couple of physicians in our medical group who were not technology savvy by any stretch of the imagination. One of them had never used a home computer, even for email, Internet surfing, or the occasional game of solitaire. We began her implementation with some basic computer usage, working on tasks such as turning on a laptop and getting the hang of using a mouse by playing solitaire. Over the course of multiple weekly visits, we tried to work with her on being able to do basic EHR tasks, such as prescribing medications and reviewing patient history elements.

Even though she was willing to try, given the volumes in her clinic and the complexity of her patients, it became clear that she wasn’t going to be able to continue to practice the way she wanted to while trying to use the EHR. We were able to convince our administration to consider allowing us to train one of her medical assistants as a scribe.

The next step was to try to find a scribe training curriculum. I found one online that had been created by a medical student and included plenty of content on medical terminology and how to act in the exam room. Since this was a seasoned medical assistant, she already knew the latter, but she wasn’t that keen on sitting through a bunch of PowerPoint slides about terminology.

We ended up doing some modified on-the-job training, where we pulled several dozen notes from the physician’s files and used them to role-play mock encounters, with one trainee acting as the patient and the other supporting the medical assistant as the scribe. We also had to do simulated patient care scenarios with the physician to teach her how to communicate with the scribe, such as how to describe her examination findings and how to ask the scribe to find EHR information and show her any lab results that she could act on during the visit.

Even though we thought it would be a short-term arrangement since the physician’s retirement was always a topic of conversation, it continued for nearly a decade. Patients were happy since they already knew her long-time medical assistant, although we had to make sure that we backfilled her role as a medical assistant so she wasn’t trying to do two jobs at the same time. It’s clear that having a scribe extended the physician’s ability to stay in practice while still meeting all of the medical group’s benchmarks.

Fast-forward to today, where I’m in an organization with its own in-house scribe training program that is extremely rigorous. Our scribes are first hired as medical techs, where they are put through an extensive classroom program followed by a rigid schedule of on-the-job training where they are required to demonstrate mastery of a subset of procedures and skills before moving to the next level. After more than a dozen supervised 12-hour shifts, they are required to work independently for six months before they can apply to be scribes.

Once they make the cut, it’s back to the classroom for more medical terminology training and additional work with the EHR, followed by a written test. If they pass, they begin to practice in-person scribing, followed by several shifts with the company’s founder and other senior physicians. Some don’t make it through, but those who do know that they are gaining invaluable experience since nearly all of them are pre-med students. The company makes them commit to at least a year of work before they’re hired, which most of them are happy to do as they use the time to work on med school applications and attend interviews.

I love having a scribe and it’s rough when I work a shift without one. You get so used to having everything you say automatically added to the orders or the note that sometimes when you are flying solo, you forget to order things. It takes time for the brain to adapt back to doing things yourself. Fortunately my staff is patient as they ask me whether I was planning to include discharge instructions for a patient or ask whether I’ve reviewed labs that have been added to one patient’s chart while I was seeing another.

Quite a few of our scribes began medical school this fall, so we are knee-deep in training the next class. Given the volumes we’re seeing with our recent COVID surge, they’re certainly getting an education.

I’m not sure what I think about virtual scribes, even though the idea is clearly a hot topic. I definitely think that patients need to be informed of the presence of a virtual scribe and to be given the chance to opt out, much as they might when a human scribe is present in person. In reality, I’ve only had a couple of patients opt out of having someone else in the room. Most of the time they are thrilled that I can focus on them rather than the EHR, and the encounters go much quicker because the documentation is done in real time. However, the virtual model has limitations in being unable to truly interact with the scribe or to use the scribe’s laptop in real time to show patients their lab trends or copies of their imaging studies.

I would be  interested to hear from anyone who is using a virtual scribe model. In what clinical situation have you implemented virtual scribes? How accepting have your patients been? What are the challenges? Any unexpected successes? If you had it to do over again, would you do anything differently?