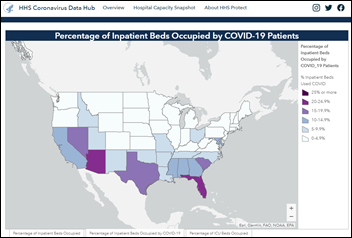 HHS activates a new COVID-19 hospitalization data website that replaces the one that was previously operated by the CDC.

HHS says CDC’s old system collected data from just 3,000 of the country’s 6,200 hospitals, but the new one will report information from 4,500 hospitals that are submitting information using HHS’s newly mandated HHS Protect system.

AMIA publishes an open letter that expresses dismay that HHS moved hospital COVID-19 reporting from CDC’s National Healthcare Safety Network (which AMIA’s letter incorrectly referred to as National Health and Security Network) to HHS Protect, saying that a pandemic isn’t the best time to go live on a new, untested system. It also questioned the requirement that hospitals provide 20 new data elements explaining why they are needed or how they will be used.

More than 100 healthcare-related groups asked in a letter to Vice-President Pence, Coronavirus Task Force Response Coordinator Deborah Birx, MD, and HHS Secretary Alex Azar that the administration reverse its decision and leave data collection and reporting to the CDC. AMIA signed that letter as well.

From Surly Bonds  of Mirth: “Re: AMIA’s open letter about COVID-19 hospital data reporting. This just-published piece explains why open letters are pointless.” An opinion piece in The Atlantic says that “the genre of open letters should die” because they are generically written with the dead language that is required to get more signatures; signers should just publish their own individual opinion instead; and such letters appear cowardly in a “safety in numbers” sort of way. AMIA labeled its editorial as an “open letter” but it really isn’t — it wasn’t addressed to a particular person or organization and it wasn’t signed, so it’s just an uncredited editorial.

It must be tough sledding out there for ad-supported websites given that I can’t view many of them on my IPad all of a sudden because of errors caused by their increasingly intrusive pop-up ads and embedded video. The home page of one site I used to look at occasionally has six ad zones, pop-up ad video, an overlay banner, and a long list of graphics-heavy sponsored content articles. Clicking on an individual article brings up a ton more of the same, plus it displays comments from an ad-supported service that throws up still more ads. Safari crashes about 50% of the time, especially if I dare touch the screen during the many seconds it takes for the junk to fully load. To further diminish the signal-to-noise ratio are “sponsored content” articles, where the site owner sells editorial space for puff pieces from companies that are labeled “partners” to make selling out seem less odious. Facebook and Twitter have endless faults, but I admit that I spend more time checking them than crudely monetized websites that offer little value amidst the electronic shrieking, low-value content that is memorable only because it is so poorly written.

WellSky’s private equity owner changes its mind about selling the company and instead brings in a new unstated investment from another private equity firm.

Goldman Sachs issues an almost unheard-of “sell” rating to shares of Allscripts, which it says has an unfavorable health IT market position and questionable growth prospects. MDRX closed down 8% Tuesday versus the Nasdaq’s 1% loss following the announcement. The company will announce Q2 results next week.

In England, Clinical Architecture is added to the supplier suite of the Greater Manchester Digital Platform, which is part of the national Local Health and Care Record program.

Medicare’s Part A trust fund, which pays for inpatient care, could run out of money as early as 2022, as swelling unemployment ranks have reduced payroll tax contributions and Congress tapped Medicare’s reserves to fund COVID-19 relief this past spring. 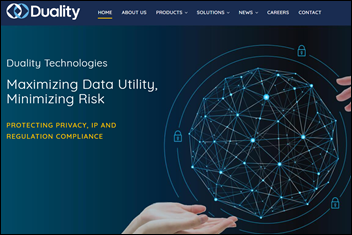 The defense department’s DARPA contracts with Duality Technologies to develop a privacy-preserving analytics that allow ML models to be trained without exposing personally identifiable information, such as in studying DNA attributes and COVID-19 symptoms.

CDC antibody testing analysis covering 10 states finds that the number of people infected with COVID-19 in the US is 2-13 times the reported rate, but those numbers are still far too low to confer herd immunity. Mississippi’s infections are an estimated 13 times the reported rate, meaning that the state has no way to find the asymptomatic spreaders and making distancing and mask-wearing even more important. Researchers emphasize, however, that US coronavirus testing is still in disarray, some commercially available tests are unreliable, and “convenience testing” is inherently biased, with results that are not necessarily generalizable. 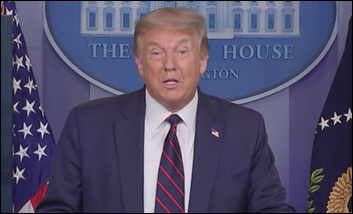 President Trump restarted regular COVID-19 briefings Tuesday evening without the presence of the coronavirus task force or any health expert. The President admitted that the “China virus,” which he also called “the plague,” will probably “get worse before it gets better,” but pledged to provided states with needed supplies and touted the likelihood of quick vaccine development and distribution. He also said that tests are being rolled out that can deliver results in 5-15 minutes, which should alleviate the testing backlog. He also said “we did a lot of things right” in keeping deaths so far at 140,000 instead of “double, triple, or quadruple” that number. Reading from prepared remarks, the President said, “As one family, we mourn  every precious life that has been lost. I pledge in their honor that we will develop a vaccine and we will defeat the virus … my administration will stop at nothing to save lives and shield the vulnerable.” 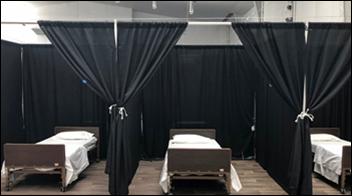 The New York Times looks at a temporary COVID-19 hospital in Queens that cost $52 million (with a potential final tab of $100 million to federal taxpayers) but treated just 79 patients because of bureaucracy and turf battles. The city decided after the fact that patients would receive better care at crowded existing hospitals; the state didn’t operate a centralized program to transfer patients out of overwhelmed hospitals; the field hospital wasn’t equipped to accept ED patients; it couldn’t use its own ambulances to pick up transfers from hospitals since those facilities have exclusive agreements with specific ambulance companies; and doctors at public hospitals were told not to transfer patients out because the hospitals would lose revenue. The field hospital’s doctors were paid up to $732 per hour to complete paperwork and computer training with few patients to see, while one nurse practitioner says she felt guilty being paid $2,000 per day to look at Facebook. 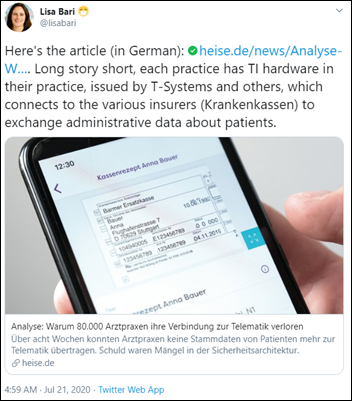 Medical practices in Germany are locked out of reviewing payer claims and encounter data for eight weeks because the security certificate of an in-office hardware component had expired. Global IT firm T-Systems, a subsidiary of Deutsche Telekom (which is not related to US health IT vendor T-System), was forced to send technicians to 80,000 practices since they were unable to apply the software update remotely. The article was written by former CMS Innovation Center health IT lead Lisa Bari, MBA, MPH.

University of Pennsylvania medical school researchers say that screening patients for social determinants of health hasn’t improved outcomes, but may have created patient harm from sloppy implementation. The authors note that assigning untrained health system employees to fire off a list of privacy-encroaching standardized questions to patients could cause them trauma, discrimination, and legal consequences, not to mention that health systems may be setting unrealistic expectations in asking about needs they can’t fulfill. The authors advise health systems to perform an initial screening with a tablet-based app that allows easily data collection and aggregation, then follow up with a personal conversation when indicated. They also warn that more widespread SDOH screening may cause a rise in mandatory government reporting — for deportation or child welfare investigation, for example – and allow data-driven discriminatory practices, such as diverting ED patients to less-expensive care or allowing insurers to cherry-pick lower-risk patients.

A survey finds that few Americans think its OK for hospital-employed doctors to ask patients for hospital donations, for hospitals to pass patient names along to their fundraising office, or for the fundraising office to perform financial background checks to target wealthy prospective donors. All of these actions are legal, however. Respondents were split over whether a million-dollar donor should get room upgrades, fast-tracked appointments, and their doctor’s cell phone number.