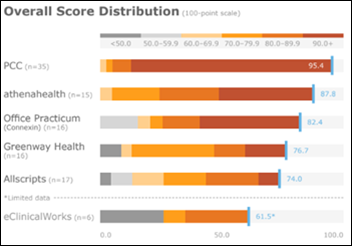 PCC and Athenahealth scored well in product robustness and value. 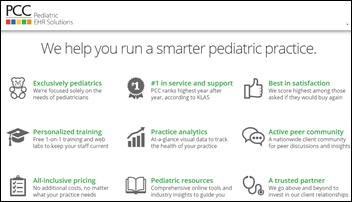 The report says that PCC significantly outperforms other vendors in relationships with its personal approach, proactive support, and hands-on executive involvement.

From Livongo and Prosper: “Re: CEOs. In 7.5 years as CEO of Allscripts, Paul Black has taken the stock from $13 to $6.50 per share with a $1B market cap. In one year, Glenn Tullman has Livongo’s stock at $108 with a market cap of $10B. Black helped push Tullman out and now Tullman is laughing all the way to the bank. How does Black still have a job?” I’ll offer these points in resisting the urge to oversimplify the situation: 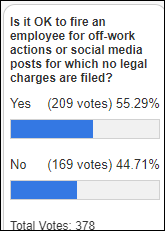 It’s 55-45 on my poll asking whether it’s OK for an employer to fire someone for off-work action or social media posts that don’t result in legal charges. Commenters point out that free speech protection in the First Amendment applies only from the actions of government, not employers, and employers are free to send an employee packing for nearly any reason that doesn’t violate Equal Employment Opportunity requirements. My definition of “OK” was intentionally fuzzy since company reasons for termination can be equally so, but the bottom line is that people lose their livelihoods every day for reasons that may have little to do with job performance.

New poll to your right or here: Which of these activities have you performed on a mobile device in the past year?

The US has nearly 52,000 people hospitalized with COVID-19, approaching April’s peak of 60,000 and nearly doubling the June 15 count. Texas has 10,000, California 8,000, and Florida 7,000. Florida reported 15,300 new cases on Sunday. Deaths have finally taken a national upturn as expected from the case and hospitalization counts, now standing at 134,000. Nursing homes are once again being hit hard, with some reporting dozens of deaths and residents making up 40% of the COVID-19 deaths in Texas.

America’s push to get students back in school will be a global experiment since no other country has every tried to institute a return to campus during raging coronavirus outbreaks.

The White House reportedly canceled the scheduled media appearances this week of Anthony Fauci, MD after he disputed President Trump’s assertion that a lower death rate shows US progress, which Fauci he called a “false narrative” that could lead to complacency. Fauci says he hasn’t spoken to the President since early June. 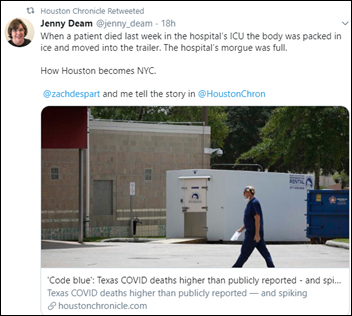 Morgues in parts of Texas and Arizona are full and refrigerated trucks are being set up there.

Atlanta will reactivate a 200-bed COVID-19 field hospital at the Georgia World Congress Center after closing it in May after it had treated just 17 patients. The state has also contracted with Piedmont Healthcare to add 100 ICU and surgical beds to deal with the COVID-surge. Both actions came after health system CEOs urged the governor to help them continue their profitable elective surgeries.

More than two dozen Mississippi state senators, its lieutenant governor, and its House speaker test positive for coronavirus after weeks of close-quarters meetings in which most or all of them ignored mask recommendations. 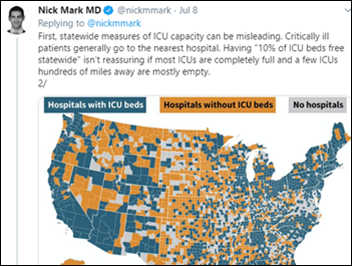 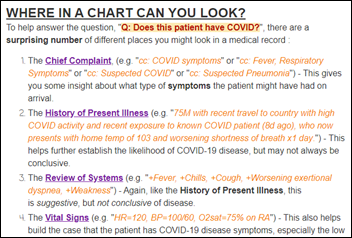 I missed this earlier: hospitalist and CMIO Dirk Stanley, MD, MPH lays out how to determine COVID-19 status from a patient’s EHR. Thanks to @CraigJoseph for tweeting the link.

A former VP of finance for an Atlanta medical device packaging company pleads guilty to trashing the company’s computer systems after being fired, which he accomplished by using a phony logon that he had created beforehand. The company distributes PPE, shipments of which were delayed due to deleted data from its ordering and fulfillment systems.